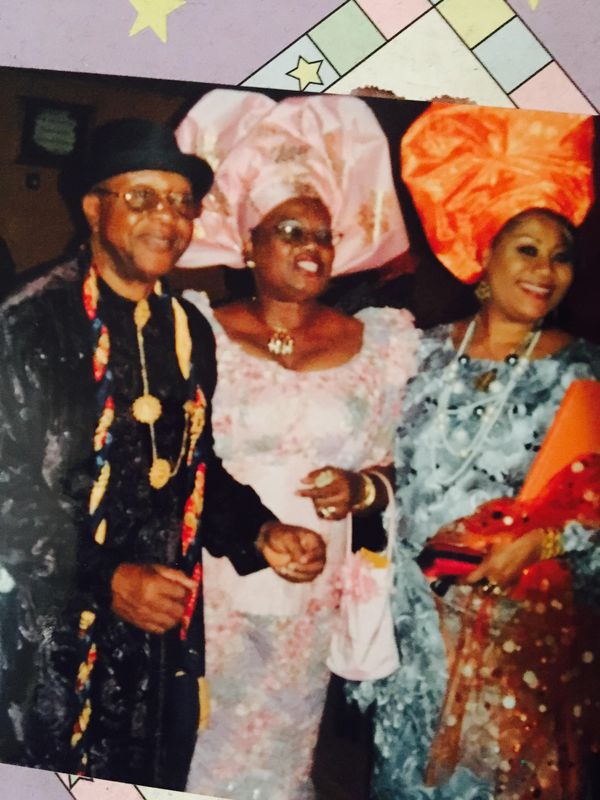 Chief Ig , You are a gentleman in all ramifications..You lived a life that is worth emulating..Most importantly you were a very loving husband,father ,brother etc..Continue to Rest In Peace , until we will all meet to part no more..To my darling Sis Ugo.. You are the most courageous woman I have ever seen..God is watching over you and Deborah..
From Pastor Joy Okonkwo

Uncle as I type this my heart still hurts.....I do believe some are just gone too soon. Where can I start... First I was always so honored to be loved and accepted as family with such an honorable couple. I wished I was your daughter. You were so humble in your greatness, the respect you gave and displayed such a dignified life.
Thank you for: allowing me to learn what serving Christ is suppose to be, what family should be and how to live a dignify and decent life. whatever you did you were committed and consistent . The laughter and memories will forever be missed. Rest in peace pops in the arms of the Lord.

Oby Ukanwoke
Tribute to Uncle IG
I will always treasure the happy moments we had in the 90s until Nini’s demise. It is so painful to see you exit this world the way you did, knowing you fought a good fight to live. You left behind a family, especially a strong and courageous woman who stood with you through thick and thin, loving you whole heartedly despite the challenges.
We know you are in a better place, resting with the Lord. Sleep uncle, sleep in peace. You will be missed 😢🙏🏽❤️😰

IG that is what we call you in ACS. He was handsome gentle man. Always smiling. You be missed. May your gentle soul rest in perfect peace.

TRIBUTE TO A GENTLE MAN

I called you Uncle Ig; I also called you Ette; you were a jolly good fellow, a gentleman and a very peaceful fellow.

You were a man of moderate tendencies in your indulgencies except when it came to eating Ube na Oka; yes corn (boiled or better still roasted) was irresistible to Uncle Ig; he would make me “travel” to ensure he ate some whenever he came to Nigeria and it didn’t matter whether the grain was in season or not, he will make you remember the place under the Mende Bridge in Maryland where the women somehow managed to have all season corn; Uncle Ig also liked the good life and general merriment; he was a good guy to have around when you make merry; but he was also very careful not to ever over indulge, he was moderation epitomized.

I remember Uncle Ig’s passion for fashion as I found in him a kindred spirit and his adaptability to “wait” for me while I indulged in endless unmasculine shopping was admirable; sometimes he complained that I wasted too much time; but by the time I come for the next summer vacation, he would have discovered another shopping spot or town or mall or emporium for our usual escapade and we would take off to the place, no matter how distant. Uncle Ig was a fantastic driver but sometimes we would get lost in the twists and turns of New Jersey and would spend 50% of our time “looking” for how to get to the shop. He and I had fun.

I remember Uncle Ig for his kindness and good heartedness; I also remember him for being 100% a Biafran. Uncle Ig longed for a Biafra where all things would work well and “our people” would not be oppressed; he desired a corruption free Nigeria and an environment where fair and free competition would be the order of the day; he was a proud Abiriba man and even a prouder Igbo man.

He liked the perfume I gave him every year “Insurrection” and said mine was the original as they managed to sell him the fake one all the time, so he looked forward to my annual gift of the “original”

Ette my man, adieu and fare you well. 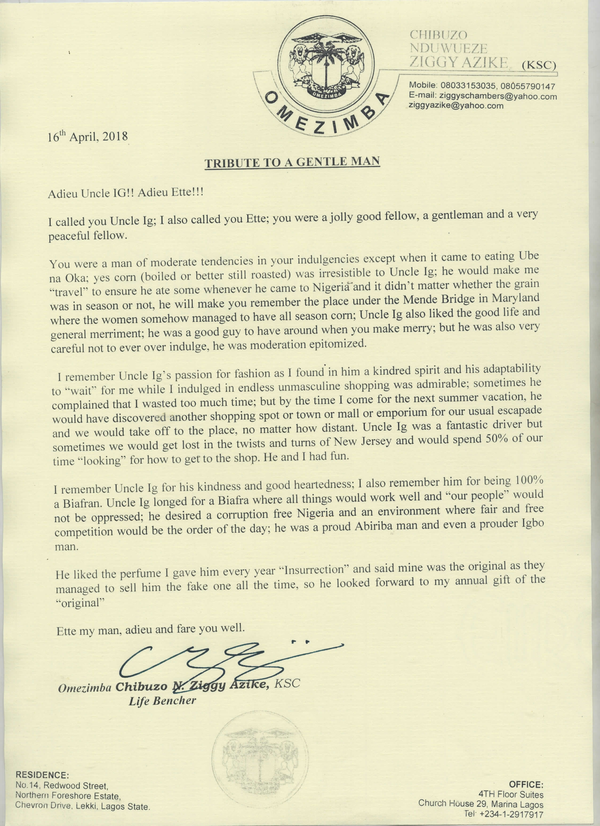 Udemgba Anyaegbu, Obiageli Grace and Engineer Akachukwu Anyaegbu Igu and Family. In Memorian Igwe ''IG'' Onwuka. It is hard to write this IG. It was just like yesterday that we last saw and spoke. You left us too soon! You are as generous as generosity. When we met you and UG in August 1980 at Eastern Washington University, you opened your home and your heart to us. We felt very much at home in your home. Your house became a common wealth for all Nigerians of all tribes. Foods, drinks, and all chewables were served without reservation. People came and left your home in Spokane without prior invitation. You are a man of the people, kind hearted, peace loving, friendly and jovial. You are not dead, but gone to rest in the bosom of our Lord. You will never be forgotten. You will always be remembered by everybody who knows you. To the immediate family members, particularly UG, we ask the Lord to give you what it takes to deal with this irreparable loss. May your kind and gentle soul rest in Perfect Peace!! 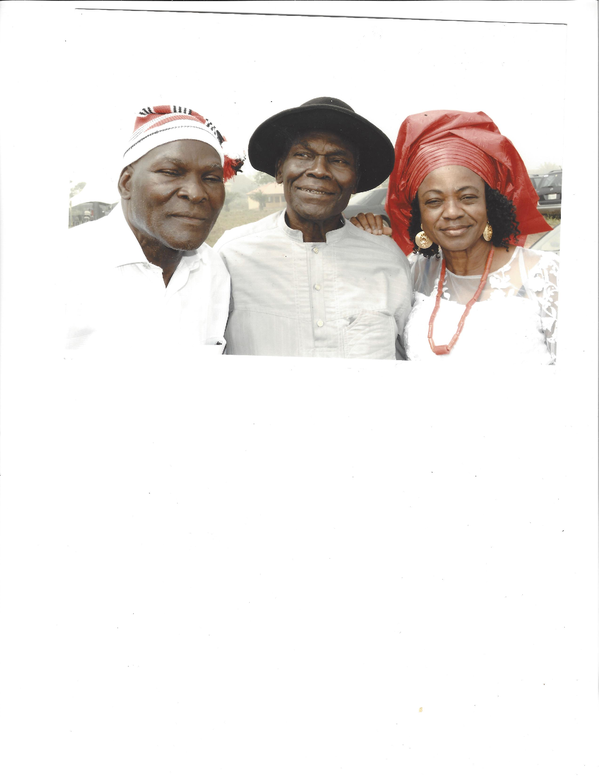 The Onwuka Family: Please accept my condolence in the departure of Chief Igwe Onwuka. He was a very quiet, and honorable family man. He preceded us in Cheney, Washington, and lived a very dignified life. His welcoming smiles, and laughter reverberates in the present. The Lord giveth, and the Lord has taken. A journey that we must all embark on. Chief Onwuka, please Rest In Peace, and be comforted that you have played your role on this planet, earth. The Lord will take care of your family. You will be missed in the Physical. Adios. God Bless Your Soul! Amen!!!

Chief Igwe Onwuka, rest in peace, little did we know your sickness was UNTO death. You have left behind loving family members and especially a loving, caring heart broken wife, who gave everything to try to keep you alive but God knows best. It pleased God to call you to glory on Good Friday, a day we remember the death of Jesus Christ! It means you are special in God's eyes and He wants to to be seated on His right hand.
I will not forget your peaceful, kind and caring hospitable nature. A quiet and devout Christian, Your house is open to all. May your soul rest in peace, sleep on

Uncle Ig as we fondly call you, it's still DIFFICULT to comprehend your absence from this world. God chose to call you to sit at His right hand on Good Friday, a day we remember the death of Jesus Christ, it means you must be very special in the sight of God. A peaceful, quiet, devout Christian, little did we know your sickness was unto death ?
Chief Igwe Onwuka, daddy uncle Ig, you have left behind a grieving loving wife who is heart broken and gave her world to keep you alive, but God knows best, May your soul RIP.