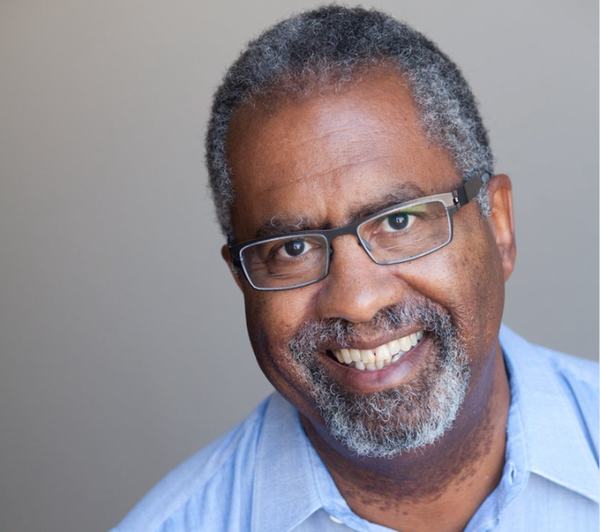 A beloved law professor and scholar

Rip had a varied and accomplished legal career. Smith was a staff attorney for the National Oceanic and Atmospheric Administration, and a research associate with the Institute for Marine and Coastal Studies. He also served as U.S. Senator Daniel Patrick Moynihan's Special Counsel for Foreign Policy. Smith was appointed by President Clinton as a science and policy advisor to the United States Arms Control and Disarmament Agency and lectured internationally on United Nations-NATO cooperation in peacekeeping. For the last 36 years, he has been a professor in international and environmental policy at the University Of Southern California School Of Law in 1980.

Rip is survived by his father, Edwin, his son, Dylan, several nieces and nephews, and his close friend and former wife, Denelle. He is remembered by family, friends, students and colleagues as a kind, gentle man with a quick smile and infectious laugh. The world was benefited by his presence. 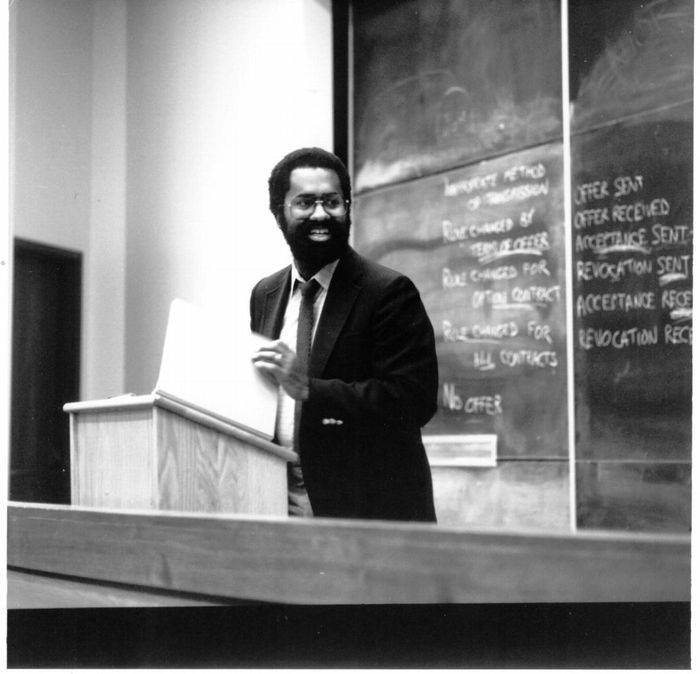 The USC posted a tribute to Smith:

Edwin "Rip" Smith, a beloved USC law professor, and steadfast supporter of his students and colleagues for 36 years, passed away Tuesday, Aug. 2, 2016.A renowned international and environmental policy attorney, Smith joined USC Gould School of Law in 1980, and was the Leon Benwell Professor of Law, International Relations and Political Science.

“Rip has been a valued member of our faculty since 1980, teaching international law to generations of students,” said Dean Andrew Guzman. “The Gould community has lost a longstanding and irreplaceable member of our family.”

Known for his infectious smile, generosity and easygoing style, Smith was admired and respected by his students, many of whom he stayed in close contact throughout the years.

“Prof. Smith was a phenomenal professor and mentor to me,” said Josh Lockman ’08, a lecturer at USC Gould. “The opportunity to co-teach a class on international law alongside him was an honor and extraordinary opportunity I will never forget.”

USC Gould Prof. Rebecca Brown said he had a “deep and authentic commitment” to his students. “It inspired me; he sought to infect them with the passion he felt about the topics that fascinated him, even when his twinkling eye revealed that he didn’t expect them necessarily to feel it.”

Smith, who earned his undergraduate and law degrees from Harvard University, also studied environmental law and was “keenly interested in the health of the oceans,” said USC Gould Prof. and former Dean Scott Bice.

“Environmental law was a relatively new field and Rip was one of the pioneers in the field.  His interest in environmental issues led him to expand into international law, as the oceans, of course,affect many countries and addressing ocean health required international cooperation and treaty responses.”

USC Gould Prof. Ron Garet who has known Smith since they were undergraduates at Harvard, said he was a cherished friend and colleague.

"Rip was a colleague on whom I relied, and the institution relied, for wise judgment on hard questions,” said Garet. “We grew up on the same beliefs about what our law school stands for and about how fortunate we are to live and work at such an extraordinary institution.  And Rip’s life and work, and his grace say much about why our hearts feel loss at this time and also feel so thankful for the gifts bestowed on us.”

efore joining USC, Smith was an associate at Rosenfeld, Meyer & Sussman, a staff attorney for the National Oceanic and Atmospheric Administration, and a research associate with the Institute for Marine and Coastal Studies.  While on the faculty, he spent a year as a Fellow of the Council on Foreign Relations.

Serving as U.S. Senator Daniel Patrick Moynihan’s Special Counsel for Foreign Policy.  Smith was appointed by President Clinton as a science and policy advisor to the United States Arms Control and Disarmament Agency and lectured internationally on United Nations-NATO cooperation in peacekeeping.

Alexander Capron, who joined USC law in 1985, said Smith’s optimism was inspiring even in the face of distressing world events.

"His involvement as a lawyer, public servant, and advisor to national and international officials made him a realist about the barriers to extending the rule of law into international relations, but his natural optimism left him hopeful that human progress in foreign relations was possible,” Capron said.

“Above all, as a person, Rip was one of the kindest, most generous, and least pretentious people I’ve known across nearly five decades in the academy, and I and all his colleagues at the law school are going to miss him very much.” 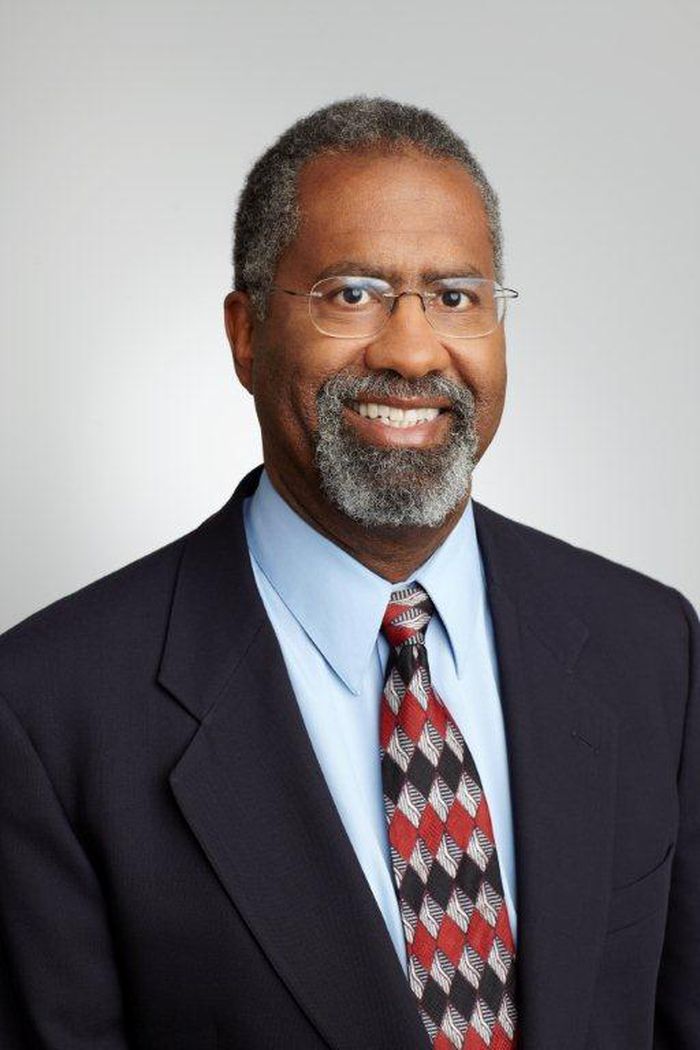 HIS FRIENDS AND COLLEAGUES FROM THE SCHOOL PAID TRIBUTE 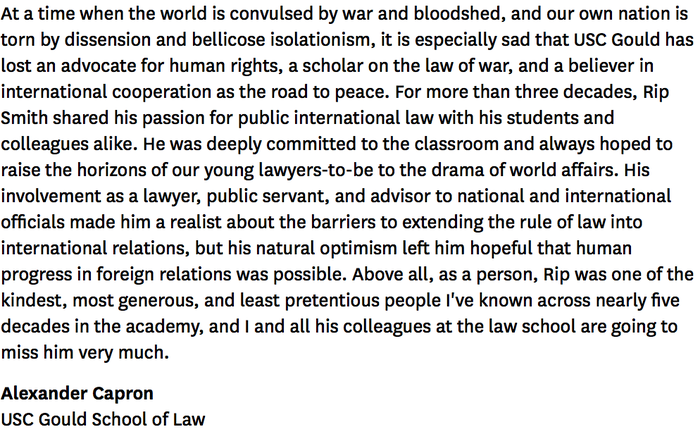 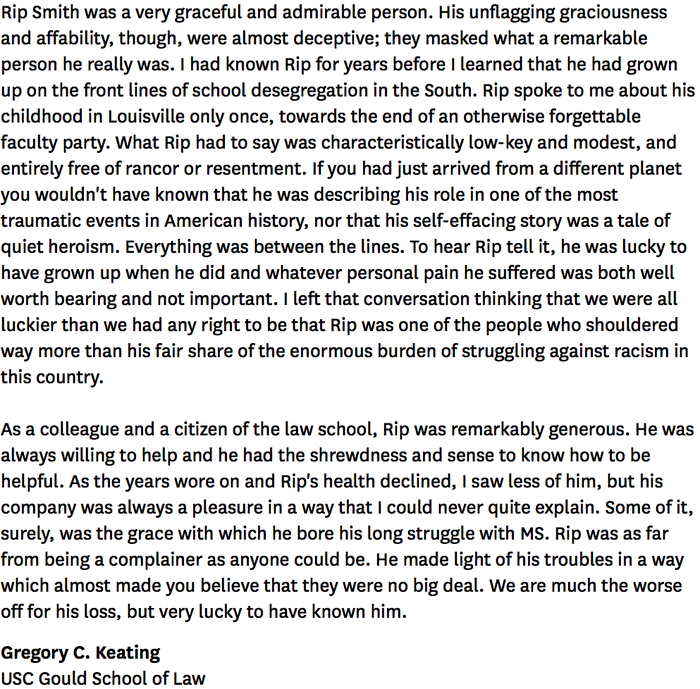 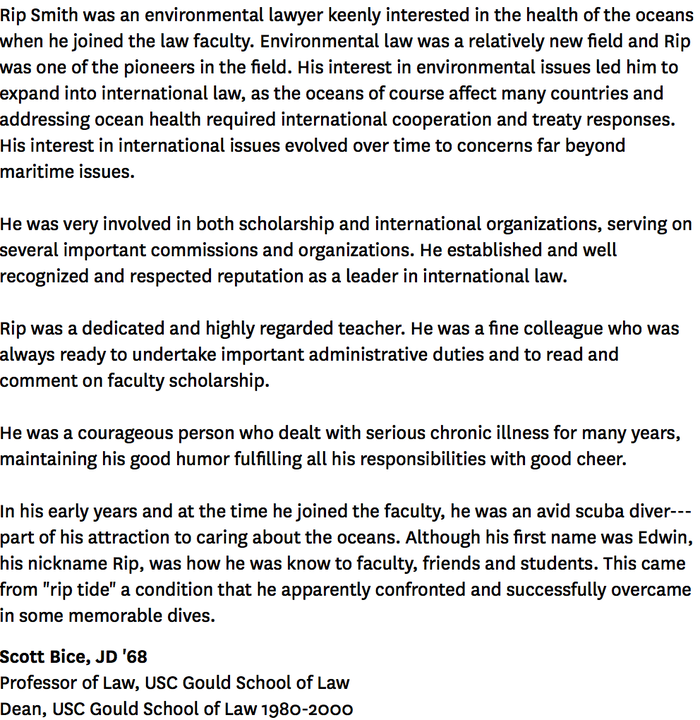 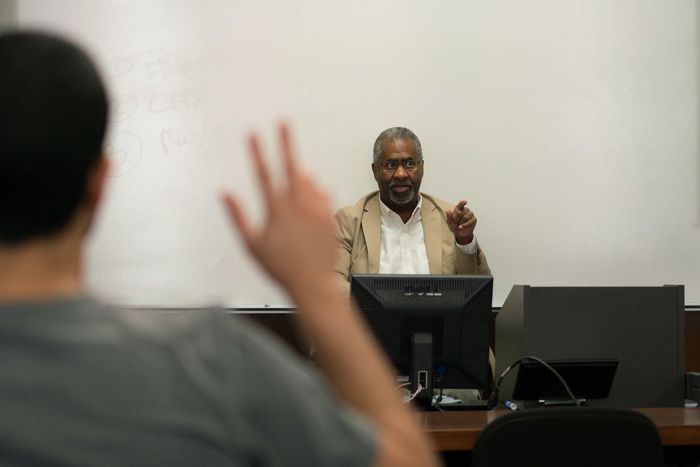 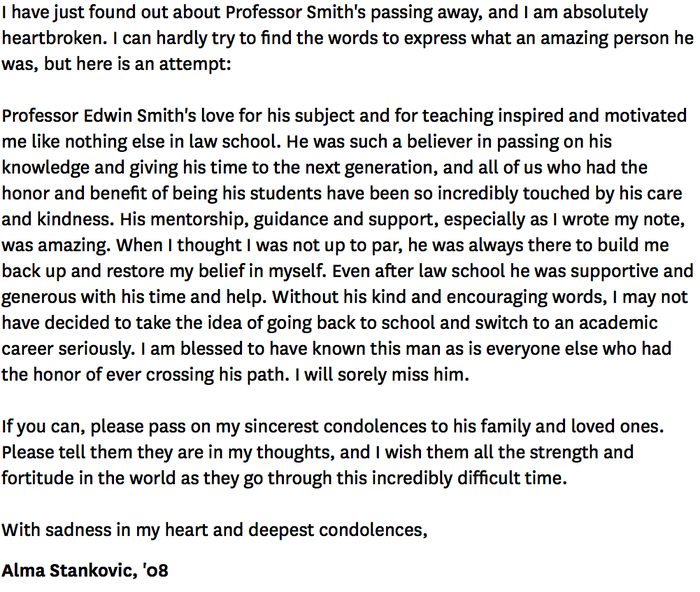 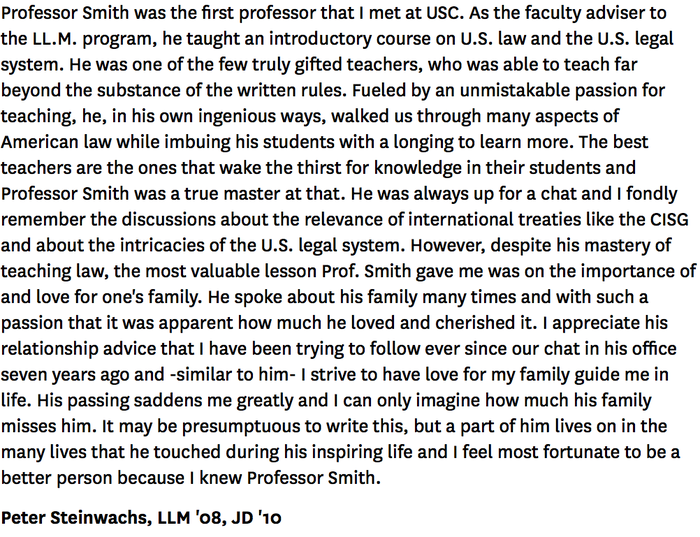 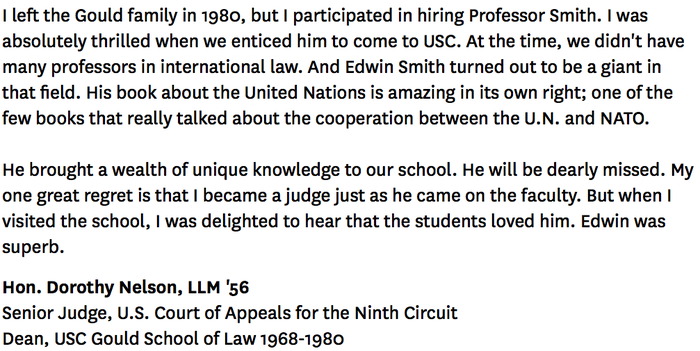 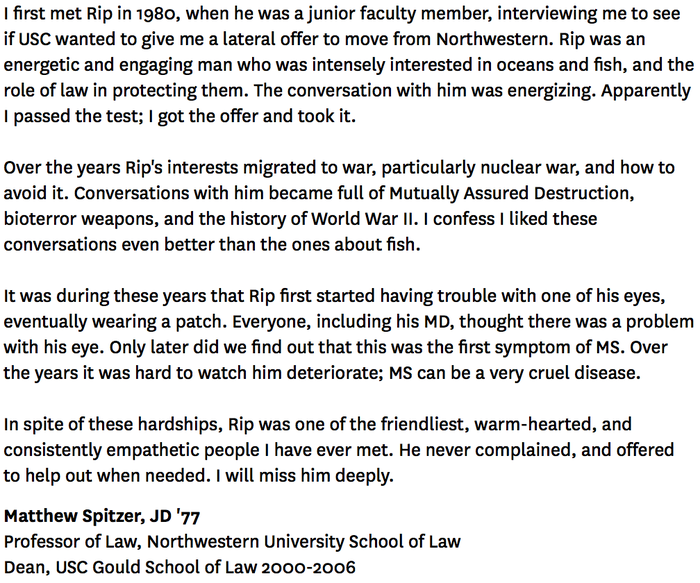 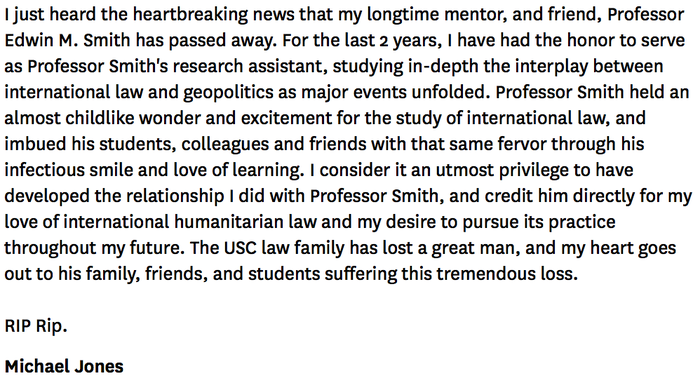 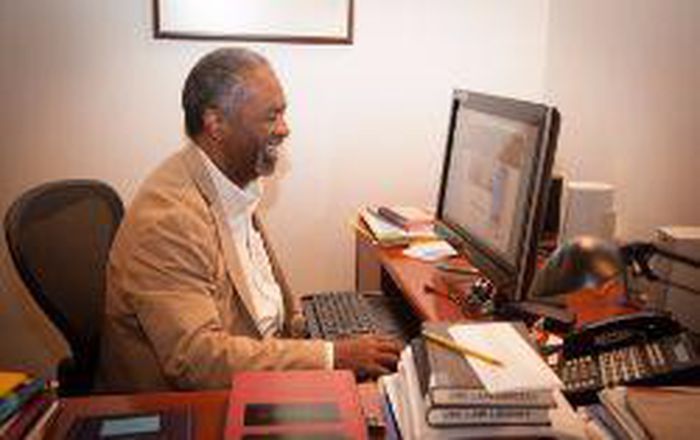