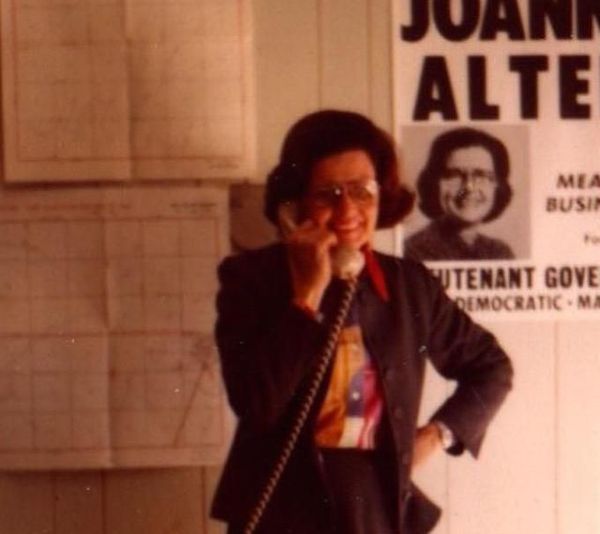 In 1971, Joanne H. Alter confronted Mayor Richard J. Daley and the Cook County Democratic Party to demand they back some women for public office. The list of 32 potential candidates she handed over did not include her own name.

Surprised but determined to follow through, she mounted an environmentally focused campaign and, with Republican Joan Anderson, was elected as one of the first two women on the board in November 1972.

Over the next 18 years, Mrs. Alter pushed relentlessly for reform at the district, once a bastion of patronage and corruption. She leaves as a legacy the trees, parks and pathways that grace the banks of many of the district's waterways.

Mrs. Alter, 81, died of cancer on Sunday, Nov. 9, in her Near North Side home, said her son Jonathan, a columnist with Newsweek magazine.

Women had not previously held elected countywide office, and Mrs. Alter endured overt sexism in her early years at the district, where a fellow commissioner once branded her a "brainless, braless broad," her son said.

Such discrimination failed to deter her efforts to cut costs and improve water quality. She railed against perks like cars for commissioners and questioned every contract, especially as the district proceeded on its massive Deep Tunnel project.

"She was very outspoken. She used to get into verbal bouts with" other commissioners, said Dick Lanyon, the district's general superintendent. "She was strong on fiscal responsibility. People were more mindful of their dollars and cents."

Mrs. Alter also pressed the district to plant trees and greenery along of the hundreds of miles of rivers and canals it controlled. She was a founding member of the Friends of the Chicago River, laying the groundwork for boating and fishing on the region's once filthy waterways.

"She was very aggressive," said former gubernatorial candidate Dawn Clark Netsch, a longtime friend. "She demonstrated in that office that a woman can be not just competent, but a leader and better than the men."

At the time she joined the district board, Mrs. Alter was already veteran political volunteer and had been appointed by President Lyndon Johnson as a delegate to the United Nations conference on women in Ghana in 1968.

"Joanne was a solid feminist but she wasn't a radical," said Elizabeth Brackett, a correspondent for the NewsHour with Jim Lehrer and Chicago Tonight who was Mrs. Alter's campaign manager in 1972. "It was very important for her to see women do more than the usual role of licking envelopes and pouring the coffee."

The former Joanne Hammerman grew up in Glencoe, the daughter of a successful manufacturer of children's clothing.

She had an early interest in politics and was a lonely Democrat at New Trier High School, where "she learned how to make waves for what she believed in," her son said.

At Mt. Holyoke College, she majored in political science and was Eleanor Roosevelt's escort on a campus visit. She long recalled how the former first lady sat down in Mrs. Alter's dorm room and asked her to talk about herself.

"She was stunned that the most famous women in the world was interested in her," her son said. "She said it taught her always to show an interest in other people."

In 1952, she married James Alter, owner of a refrigeration and air conditioning company who shared her interest in politics.

The couple had four children and lived in a sprawling Victorian home near Belmont Harbor that hosted countless parties for the lakefront liberal set and visiting politicians, while she kept busy as a "professional volunteer" on local and national issues.

When Martin Luther King came to Chicago in 1966, he attended a fundraiser in Mrs. Alter's home, her son said. Mayor Harold Washington and Sens. Paul Simon and Richard Durbin also stopped in over the years. Never content to merely pass canapes and freshen drinks, Mrs. Alter was always in the thick of lively discussions.

"She was offended at the idea that women would be in the kitchen while men were out talking politics," her son said.

Mrs. Alter ran unsuccessfully for lieutenant governor in 1976 and Cook County clerk in 1990, the year she stepped down as a trustee.

She subsequently helped start Working in the Schools (WITS), a tutoring program for at-risk children in Chicago, an outgrowth of her volunteer work as a tutor at schools near the Cabrini- Green public housing complex.

She continued to press to get more women into elected office.

"She felt she had been fortunate enough to be part of a successful movement," her son said. "But her standards were so high, she still noted there weren't women in the (U.S.) Senate and the state legislatures commensurate with their percentage of the population."

A celebration of Mrs. Alter's life is set for 10 a.m. Wednesday in Preston Bradley Hall in the Chicago Cultural Center, 78 E. Washington St.