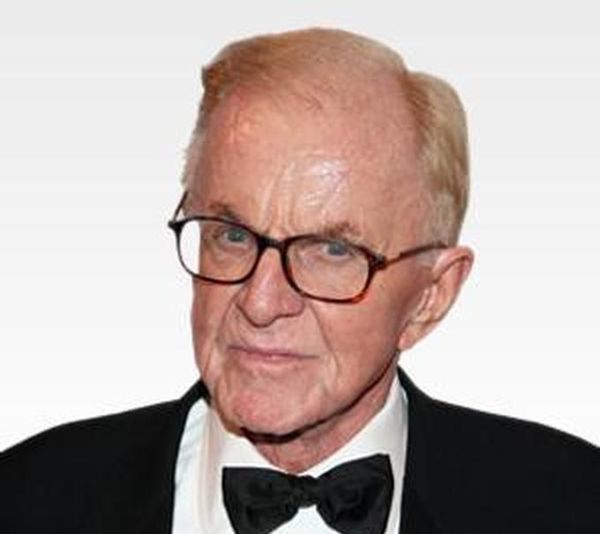 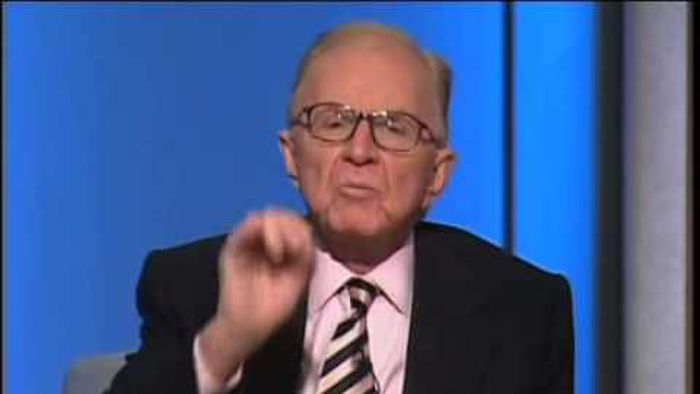 John McLaughlin was born in Providence, Rhode Island, in 1927, the son of Eva Philomena (née Turcotte) and Augustus Hugh McLaughlin. He grew up in a Catholic family who were second-generation Irish Americans. At age 18, he entered Weston College in Weston, Massachusetts, which later became the theological seminary of Boston College, to prepare for the priesthood.

He entered the Jesuit order of the Catholic Church in 1947, was ordained as a priest in 1959, and went on to earn two master's degrees (philosophy and English literature) from Boston College. After his ordination, McLaughlin spent some years as a high school teacher at Fairfield College Preparatory School, a Jesuit prep school in Connecticut. He took time off from teaching to earn a Ph.D. (philosophy) from Columbia University. He wrote his thesis on the Anglo-Catholic poet Gerard Manley Hopkins. He then became a writer and later assistant editor for the Jesuit current affairs publication, America, in New York City. Disagreements with the editor of the magazine led to his departure in 1970 after which he moved back to Providence, Rhode Island.

McLaughlin was originally a supporter of the Democratic Party and opposed the Vietnam War but then became a war supporter and changed his party affiliation to Republican. In 1970 he sought permission from the Jesuit order to run for a seat in the United States Senate, representing Rhode Island. When his superiors refused, McLaughlin defied them but lost to the incumbent four-term Senator John O. Pastore.[1] Through a friendship with Pat Buchanan, McLaughlin then became a speechwriter for U.S. President Richard Nixon. In 1974, after the resignation of President Nixon, he was ordered by his Jesuit superiors to return to Boston. He soon thereafter left the Society of Jesus.

From 1981 to 1989, McLaughlin was Washington editor and author of the monthly political column "From Washington Straight," for National Review.

The McLaughlin Group premiered in 1982. The show features four political commentators, usually two conservatives and two liberals, with McLaughlin seated in the middle. The McLaughlin Group is most widely seen on PBSaffiliates, and is taped at the studios of WUSA-TV in Washington, D.C.

His loud and forceful style of presentation has been parodied by comedians and other commentators, most notably Dana Carvey of Saturday Night Live. McLaughlin himself appeared as the Grim Reaper in an SNL sketch that parodied his show.

On August 23, 1975, McLaughlin married Ann Dore, his former campaign manager. She served as Secretary of Labor under Ronald Reagan from 1987 until 1989. The couple divorced in 1992.

During the December 26, 2014, year-end awards episode, McLaughlin ended the show saying: "Person of the year: Pope Francis, especially now that he's told that animals can go to heaven. And Oliver is up there waiting for me." Oliver Productions, Inc., is named after McLaughlin's pet dog [10]—a basset hound—and is seen in an animation as part of the brand logo shown at the close of each show. Oliver shared their Watergate apartment during McLaughlin's tenure as speechwriter for President Nixon.]

McLaughlin was an avid kite flyer and entered several kite flying competitions between 2006 and 2013.

After missing his first broadcast in 34 years, McLaughlin died on August 16, 2016 at his home in Washington D.C. 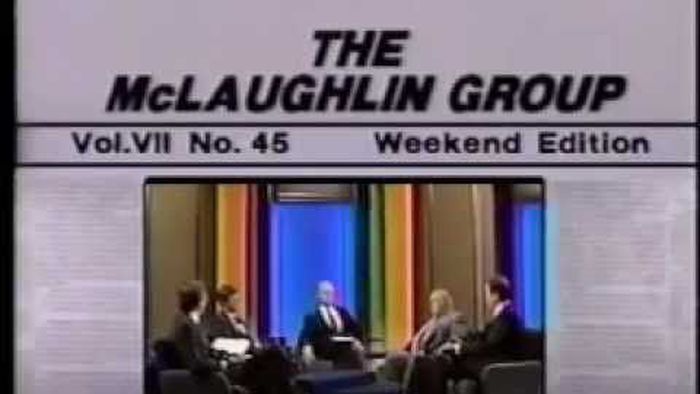 TRIBUTE FROM ELEANOR CLIFT, ONE OF THE SHOW'S REGULARS: 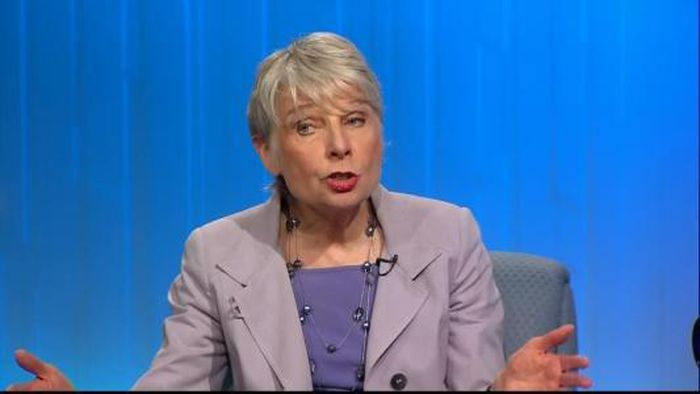 From Eleanor Clift's lovely tribute on the Daily Beast:

I wasn’t part of the original cast, but in 1983, as a reporter in Washington for Newsweek, he summoned me to his then office on K Street and peppered me with a series of questions. I remember two of them: What did I think about Barney Clark’s heart transplant? He was the first recipient of an artificial heart, and he died after 112 days. There was a debate over the ethics of how much it cost and whether it was worth it.

The second question was about arms to Taiwan. What was my position on that? I looked at John, dumbfounded, and said, I’m a reporter, I don’t have strong opinions.

“You want to be on my show, you better get some strong opinions,” he said. That turned out to be really easy. I was seated across from Buchanan, the original culture warrior, and next to Bob Novak, the conservative columnist with a permanent scowl known as the “Prince of Darkness.”

You couldn’t find better character actors, and I would be remiss if I didn’t mention Jack Germond, one of the original panelists who for years was every viewer’s favorite for his grumpy insights and his defiantly liberal positions.

John, with his imposing stature and his booming voice of God, was of course the larger-than-life figure that dominated the show. He created such a high-octane atmosphere that there was no time for hemming and hawing, or for pretending to be fairer than you felt. You had to blurt out what you actually thought before you got cut off.

As one of the few women in the early years to appear regularly as a panelist, I got cut off more than the men. But I held my own, which is what other women would often tell me, and that will be the title of the memoir I plan to write some day....

It was a game, but it was also serious. Every issue was deeply researched, and John relished weightier issues like NATO enlargement, making us eat our vegetables before we would get to the easy headlines....

We will miss his signature phrases, beginning with Issue One, and ending with Bye-Bye. And we will miss the man, who was always a blast to be around. John was an original, and while there are many imitators, he will never be overtaken. He got there first, and he created something that in its own way is as iconic as The Honeymooners with Jackie Gleason, a comparison I know John would love. 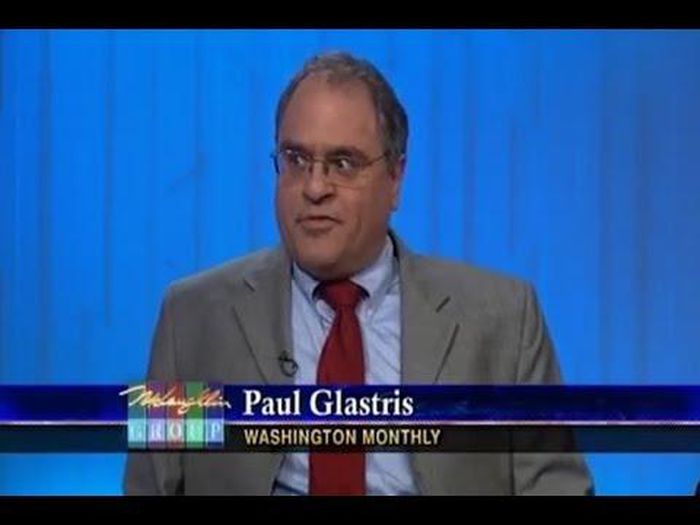 From Paul Glastris, the editor of the Washington Monthly, and a regular guest panelist:

The show also benefitted, I think, from the fact that over the years, as the GOP moved further and further to the right, McLaughlin, like most established Washington conservatives I know, found himself out of step with his party. Along with his beloved sidekick Pat Buchanan, he opposed the invasion of Iraq and despised the neocons. He and Buchanan kept up the bluster, but in the time I spent hanging out with them at the WUSA studios on Wisconsin—and it was quite a bit of time, since each show would take several hours to produce—I got the sense that the Obama years felt to them a little like the Reagan years did to me.

In his repartee, both on and off the air, you got a sense that John actually enjoyed it when you had strong, informed, persuasive responses to his provocations. His scowl would loosen and his eye would twinkle—like he was proud of you.

The last time I talked to him, it was by phone. He called with a question.

“Paul, it’s John. What do you know about this kid Josh Green. He worked for you, right?”

Yeah, I said, Josh is a great journalist, a real star at The Atlantic, now doing fabulous stuff at Bloomberg/BusinessWeek.

“Would he be good on TV? I’m thinking of asking him to be on the show this week.”

He’s great on TV, I said—smart, knowledgeable, very much at ease. He’s on Bloomberg and MSNBC a lot. A natural talent.

“Because I have an opening and I might ask him on.”

You won’t be disappointed.

“If he can’t make it, are you available?”

Since its debut in April 1982, "The McLaughlin Group" upended the soft-spoken and non-confrontational style of shows such as "Firing Line," ''Washington Week in Review" and "Agronsky & Co." with a raucous format that largely dispensed with politicians. It instead featured journalists quizzing, talking over and sometimes insulting each other. In recent years, the show billed itself as "The American Original" — a nod to shows that copied the format.

"My feeling is talk shows have not kept pace with the breakthroughs and changes in format in television generally," McLaughlin told The Associated Press in 1986. "I began the group as a talk show of the '90s."

He said informing an audience could be entertaining: "The acquisition of knowledge need not be like listening to the Gregorian chant."

Critics said the show was more about show business and entertainment than journalism and politics. They said it celebrated nasty posturing, abhorred complexity and featured a group of mostly aging conservative white men spouting off on topics they knew little about.

"Whether it was the guerrilla strategy of Afghan mujahedeen or the next open-market operation by the Federal Reserve Board, the members of the group always seemed to have just gotten off the phone with the guy in charge," Eric Alterman charged in his book, "Sound and Fury: The Making of the Punditocracy."

But the format was hugely successful. As McLaughlin himself might have said, on a probability scale from zero to 10 — zero meaning zero probability, 10 meaning metaphysical certitude — in the show's heyday, the chances that the Washington establishment faithfully tuned in each week was definitely a 10. 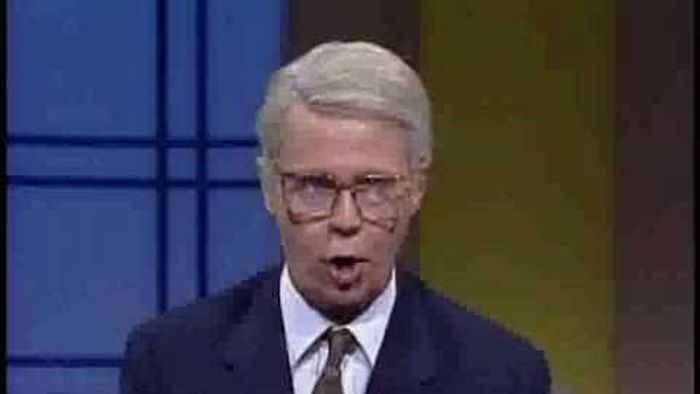 "John McLaughlin was one of the most original and appealing television commentators of our time," said Mortimer B. Zuckerman, Chairman and Publisher of The Daily News and a frequent panelist on the program.

"The liveliness of the show 'The McLaughlin Group'was a reflection of his unique personality as well as his keen intellect, which helped to cover and uncover the numerous landscapes of opinions that steered his listeners to make qualified decisions," Zuckerman said. "I was privileged to spend many hours talking with John, on and off his show; his friendship and intelligence will be sorely missed, not only by me, but also by his many listeners, colleagues, family and friends.”

Along with his fondness for politics and his brash, loud interview style, McLaughlin had a lighter side and named his production company after his beloved pooch, Oliver — a basset hound that he lived with at the Watergate apartment complex in Washington D.C. — when he worked as a speechwriter for President Richard Nixon.

He remembered the dog during a year-end episode of “The McLaughlin Group” in 2014 saying, "Person of the year: Pope Francis, especially now that he's told that animals can go to heaven. And Oliver is up there waiting for me." 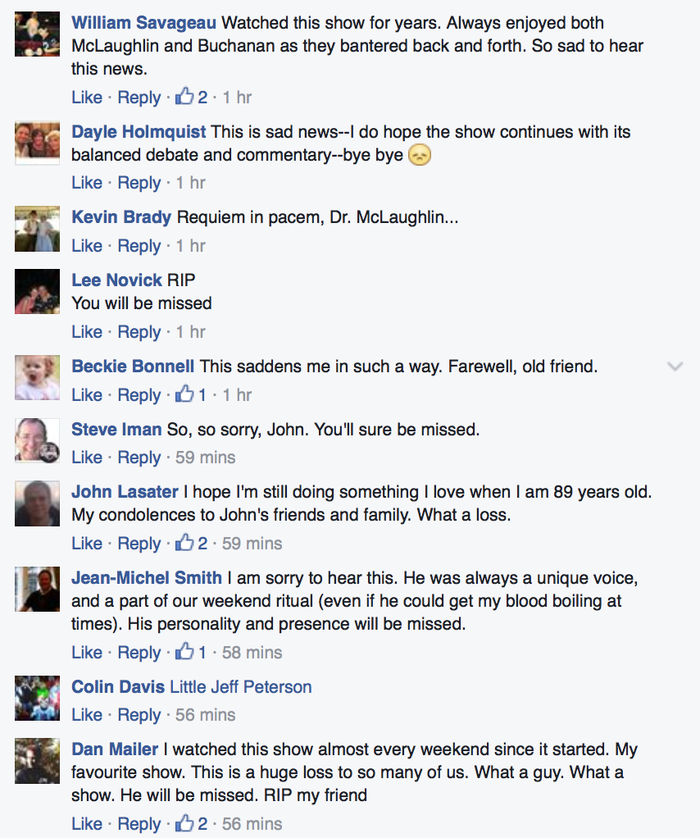 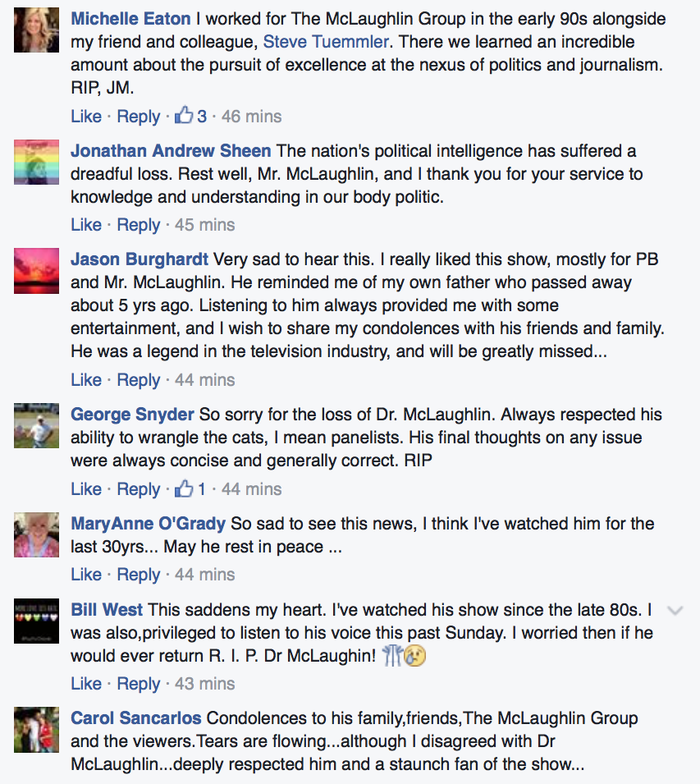