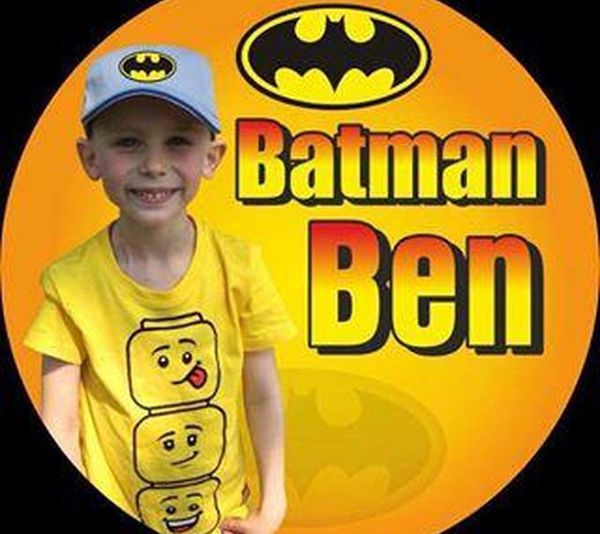 Ben 'Batman' Farrell, a 5-year-old whose well publicized battle with cancer drew trans-Atlantic support both on- and off-line, passed away on August 17.

Ben first complained to his mom about his stomachaches in December 2015. His mother Valerie brought him to a doctor, who quickly told her that it was just acid reflux, but Valerie knew in her gut that there was more to the story. She told Independent.ie,

"Being a mother, I knew it wasn't acid reflux. My mammy instincts kicked in and I brought him straight to the hospital."

On December 23, every parent's worst nightmare began for the family. Ben was diagnosed with a rare form of cancer called Wilms tumor, and began chemotherapy immediately. By March 2016, the cancer had metastasized, and the doctors had all but given up. But Ben and his family could not stop fighting.

They learned of a possible treatment option in the United States,  but his mother soon learned that it would cost more than they had to pay. She shared her thoughts in an interview with Independent.ie.

Faced with many uncertainties one thing is clear to us. We must fight. We must give Ben every chance no matter how far or what the cost. We know treatment in America runs into hundreds of thousands and we need help to give us more options

The family began fundraising, and soon people all over the world, following Ireland's example, rushed to his side to fundraise for his treatment. He loved Batman, and his name became associated with the superhero when the viral hashtag '#batmanben' began trending. His mother but commented to Independent.ie on the amazing response their story had gotten.

The fundraising is flying. It’s amazing how well it’s going. It’s better than we could ever have imagined. The public have been absolutely amazing. I think it’s an Irish thing that we all support each other in times like this. It’s not just our community that’s supporting us, it’s communities we’re not even part of and we’re so thankful.

In the heat of it all, Ben remained his young joyful self. His favorite activity, other than being Batman, was playing legos in his spare time. He loved to cheer on the Irish National Football Team, and regularly updated his Youtube channel.

Over 100,000 pounds were raised to help pay for Ben's treatment, which was estimated to cost 260,000 pounds. Though the family didn't have the whole payment, they had to move fast for Ben's sake. They arrived in the United States in July 2016 and were received by locals with open arms. Ben's mother spoke highly of their welcome to Independent.ie.

People have been very kind and welcomed us with great warmth. Everyone we meet has an Irish Granny. Even thousands of miles from home that Irish scenes of warmth and community is helping us. Words cannot describe how grateful we are to have that support.

Throughout the entirety of the nightmarish experience, Ben had kept his spirit high. Months before they left for the United States, his mother told Independent.ie how strong his spirit remained.

"He brings us through this somehow instead of the other way around. It feels like his is the one driving us along and we are following his lead."

Ben died on August 17, mere days before his treatment was set to start. The internet soon filled with tributes for the fallen five year old superhero.

And we think we have problems! ✋🏼 Such a sad day today! RIP Batman Ben, real life superhero! 😇😢 Count your blessings! #BatmanBen