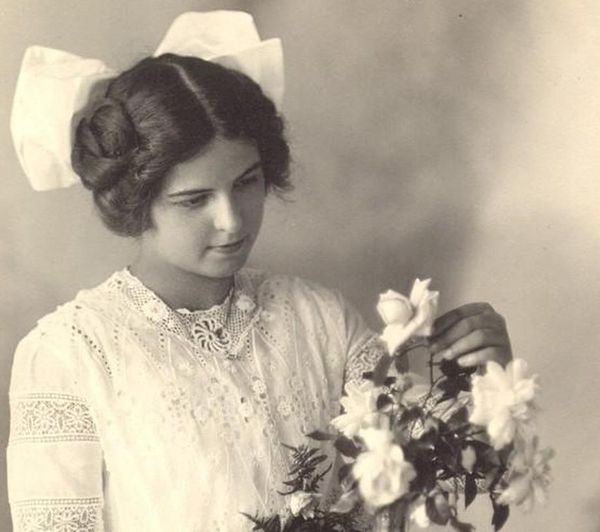 Emily Kemp Auble was born 19 August 1899 in Chicago, Cook County, Illinois to Charles and Georgianna (Kemp) Auble. She was an only child. Charles Auble was a painter (artwork? houses? I think houses, but I don't know!).  Here is the only baby picture I have of Emily: 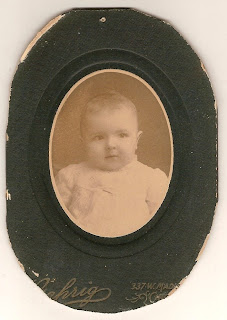 In about 1911, the family moved to San Diego from Chicago - Georgianna's brother Franklin Kemp was living in San Diego at this time

The family resided at 767 14th Avenue in San Diego for several years. Emily attended San Diego High School, but left school after her father died in 1916 after falling down the stairs in the house. She worked to support her mother, and met young Lyle Carringer while working at Marston's.

This picture is of Emily just before her wedding to Lyle Carringer on 19 June 1918: 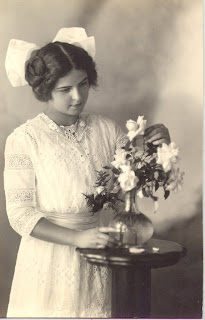 Lyle and Emily were married at the Central Christian Church in San Diego by the Rev. W.E. Crabtree, with only the immediate families present. After their marriage, they lived at 2054 Harrison Street in San Diego, where their daughter Betty was born on 30 July 1919.

In the 1920 U.S. census, this family resided at 2054 Harrison Avenue in San Diego, San Diego County, California. The family included:

In 1920, the family built and then moved into a house at 2130 Fern Street in San Diego, on the same block as Lyle's parents. Lyle borrowed money from his parents to build the house, and Betty remembers the mortgage was $21.10 per month. Emily worked at Marston's for several periods between 1920 and 1940.

Emily's daily life as a wife and a mother was probably very typical for the time period - a housewife shopped for groceries and supplies daily, cooked for the family, cleaned the house, made, bought and/or mended clothes, washed the clothes, swept the walks, worked in the garden, took care of her daughter, read for pleasure, loved her husband, went out once in awhile to movies, galleries or the park, etc.

Here is a picture of Emily and Betty (my mother) taken in about 1930: 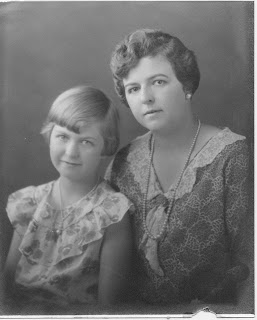 The 1930's were not an especially hard time for this family because Lyle kept his job at Marston's Department Store.

Betty graduated from San Diego High School in 1936, and from San Diego State College in 1940 as a teacher. She continued to live at home until she married Fred Seaver in 1942. Their son, Randy, was born in 1943 and Betty and Randy moved back to the 2130 Fern Street house when Fred went into the U.S. Navy in 1944.

This is a picture of Emily and Lyle, and Emily's mother Georgianna (Kemp) Auble, with Emily's cousins, Will and Bessie Pentecost, taken in about 1945. 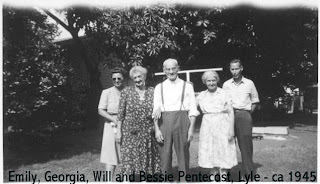 Lyle inherited all of the family property on the block (6 units) when his mother died in 1944 and his father died in 1946. The gardens on the property had plants, vegetables, berry bushes and fruit trees. There was a large greenhouse on the 2130 Fern Street property. Lyle and Emily moved into 2115 30th Street (the downstairs flat) in 1947 and the Fred Seaver family moved into the upstairs flat at 2119 30th Street.

On 24 August 1950, Lyle and Emily purchased a triangular lot on Point Loma at the intersection of Armada Terrace and Harbor View Place (identified as Lots 14 and 15 in Block 4 of Ironton according to Map 689, the address was 825 Harbor View Place) from Edmund and Eleanor Pieper for $3,750 (Grant Deed recorded in Book 3759, Page 119). They built a unique and beautiful two bedroom redwood home overlooking San Diego Bay with a fantastic view of the City, San Diego Bay, North Island and points south, and the mountains to the east. They planted fruit trees and many colorful shrubs on the terraced land below the house.

This is a photograph of Lyle and Emily taken in about 1970. 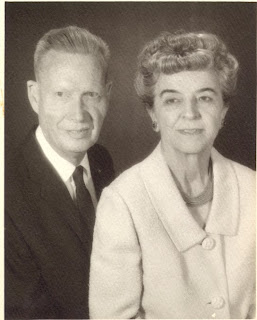 Emily was a housewife and loved gardening and flower arranging. She was a member of the San Diego Floral Association and the Flower Guild Arrangers of San Diego. She entered many floral arrangement competitions and was a master judge of flower arrangements for the National Council of State Gardens Club. She was also a member of the Point Loma Assembly and Ikebana International. She was a prim, proper, happy, optimistic, loving, warm and gentle person who enjoyed being with friends and family.

She suffered a stroke in the 1960's but seemed to recover quickly, and lost quite a bit of weight. Emily suffered from Alzheimer's disease in the 1970's, and died following a stroke at home on 19 June 1977. She is inurned at Cypress View Mausoleum (Bronze Corridor, Niche 60) in San Diego, CA.

I have so many wonderful memories of, and deep feelings about, this Very Important Person in my life. They include:

* She took care of me daily during World War II (1944 to early 1946) when my father was in the U.S. Navy and my mother was teaching school. She was probably the one who saw my first step and heard my first words. I always felt very close to her, more so than my two brothers did, for this reason.

* When I was a young boy, Lyle and Emily lived downstairs from us, and I often visited them, went to the Piggly Wiggly store two blocks away with her, and loved playing in her fenced-in gardens by her house. She was the one who supervised our berry picking and lemonade selling ventures.

* When Lyle (Gramp) and Emily (Gram) moved to Point Loma in 1951, their home became my second home. Their grandsons have fond memories of many Christmas Eves spent bedded down in the spare bedroom, singing Christmas carols, and falling asleep before Santa Claus came. We always went to their house on the Fourth of July to watch the fireworks over San Diego Bay.

* She always encouraged me to do well in school, to learn about San Diego, and to play fair and do my best. My youth years were not wonderful from a peer standpoint because I was small, wore glasses and was not adept in sports or mechanical things. She was sort of my "secret friend" I could talk to about things.

* After Linda and I married in 1970, we didn't visit Lyle and Emily as much as before. There were the holiday events, but we were just "too busy" to visit more than occasionally. When Lyle died in 1976, we started taking my mother over to the house to help Emily with basic things (my father refused to go because she would berate him - the Alzheimers) and to check on her. It was on one of these visits that we found her on the floor, near death, after a stroke. The sight is seared in my memory - it was so hard to see this lovely woman in that way. My eyes still tear up over the memory. She died that night in the hospital.

Other than my wife and mother, Emily Kemp (Auble) Carringer was the person I loved the most throughout the first 33 years of my life. I so appreciate the legacy that she left me - especially the memories of a life well lived and the wonderfully diverse heritage - mainly colonial 17th century English in Massachusetts, New York and New Jersey, colonial 18th century German immigrants to New Jersey, a small colonial Dutch line in New York and a mystery French Canadian line.

Thank you, Gram! for making my life so good and my genealogy work so interesting!