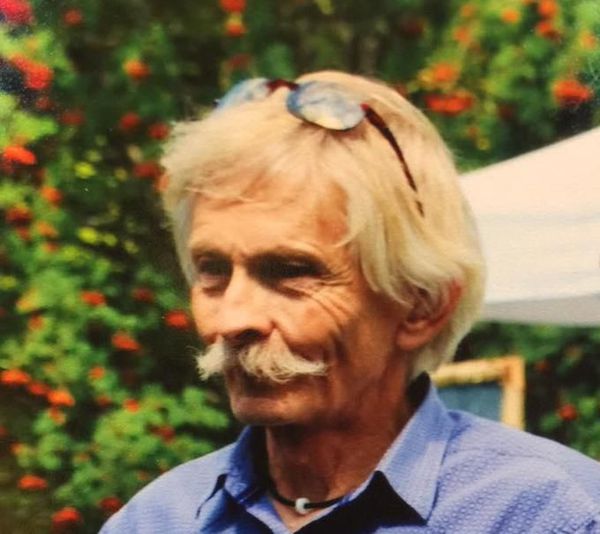 Ward “Wink” Hastings died entirely too soon at age 69 on August 7, 2016 in Baltimore, MD after battling pneumonia.  Wink is survived by his brother and sister-in-law Chip and Susan Hastings, and nephew Chris Hastings and wife Cyndy in New Hampshire, his niece Jan Hastings and husband Chip Stiles in Maine, and his Aunt Betty Keller, cousins Burma Barnes and Lucinda Keller in Hawaii, 5 grand-nieces and nephews, a tremendous network of friends in the greater Baltimore area, and colleagues throughout the country.

Born in Massachusetts in 1947, Wink spent his childhood in New England and moved to Utah to attend Utah State University where he earned a Bachelor’s Degree in Landscape Architecture in 1974.  Family, friends, and colleagues will remember Wink as a conservationist, a photographer with an acute eye for the natural world, a talented woodworker, an extreme skier, rock climber, cyclist, hiker, kayaker, and competitive amateur triathlete.  He was physically tough as nails, gentle in soul and heart, and in tune with popular culture. Wink was a gentle and kind friend with a wry sense of humor, the best storyteller, a life enthusiast, and an impeccable gift giver.  In recent years, Wink was a regular volunteer teaching meditation at the Maryland Women’s Prison in Baltimore and studied at Wonderwell Mountain Refuge, a meditation and retreat center in the Tibetan Buddhist tradition in New Hampshire.

Wink was a true champion for public and private land conservation and had a distinguished 42 years of service with the USDA Forest Service, Bureau of Reclamation and Bureau of Land Management.  In the late 1980’s, Wink joined the National Park Service’s Rivers, Trails and Conservation Assistance Program as a Landscape Architect in Milwaukee, later moving to Atlanta before finally ending up with the Chesapeake Bay Program in Annapolis, Maryland.  In Milwaukee he worked on projects such as a restoration plan for the Chicago River, and a greenway plan for the Menomonee Valley in Milwaukee, a project recently recognized by the American Society of Landscape Architects.  In Atlanta one of the many projects he worked on was a plan to commemorate route of the 1965 Selma to Montgomery March as a National Historic Trail.

Wink was seldom in the Bay Program office in Annapolis and that’s how he liked it.  He spent the majority of his time in the field- working with local watershed organizations and land trusts throughout the Chesapeake Bay watershed teaching through practice, rather than rhetoric or strident ideology.  In recent years, he had been working with the Land Trust Alliance and local land trusts on strategies for increasing the relevancy and diversity of the land trust movement. He was a frequent instructor for national strategic conservation training and conducted conservation planning workshops for land trusts.

American Chestnut trees will be planted by friends and family in his honor and donations in Memory of Wink may be made to Wonderwell Mountain Refuge  http://www.wonderwellrefuge.org or The National Land Trust Alliance http://www.landtrustalliance.org.   A Scholarship fund for students in the Landscape Architecture and Environmental Planning program at Utah State University is being established in Wink’s name.

Wink was well loved and will be sorely missed.

I knew Wink at Utah State and there was a bunch of us that shared a house in Logan. Wink was a true gentleman and outdoorsman. It's nice to see some familiar names in his memorial. Long live L'Arete Monter Outing Club.

I'm so very sorry for the loss of Wink. And I'm also sorry I didn't write something sooner. I had printed photographs for Wink for some years, and I knew him to be one of the kindest, most thoughtful, and truly interesting souls that I have worked for. I also dabble in woodworking, and Wink kindly invited me to visit his studio, to see his setup shortly before he fell ill. I was totally shocked when I heard of his passing. We had spoken on the phone just weeks before. I had some prints he had me make as a gift for family member. I was doing some cleaning up right before the holidays, and found these prints, as well as a few others from prior years. I would happily give these to a family member, if anyone would like to have them. Please feel free to contact me: john.reid.eichelberger@gmail.com

It was about this time of the year in 1966 that we first met while stowing our locker boxes in the basement of Utah State's East High Rise dorm. Two kids: one from Boston, the other a Kansas refugee. From then on we seemed to meet no matter where or when: riding the bully at Beaver Mtn, Ashley Nat Forest, skiing Alta, Alaska, Olympia, USBOR at SLC, the Mark Twain NF with Dain, the Cactus Club in Logan, Baltimore, oysters at Annapolis; a Moose wedding, a week in a Bell 206 doing Wyoming waste load allocation studies, wherever ... whatever. It always just seemed to be the right time for friendship. And even that totally unanticipated moment when a chopper door opened and our faces met while on a fire in Idaho. No idea! But so glad! I recall the winter he spent customizing his Dodge van in our garage. We decided to take it to San Francisco for a fear and loathing shakedown. Ah yes! Dim Sum at the Golden Dragon, being asked to leave the sampling room at Sebastiani's (for cause), and wandering (giggling profusely) the catacombs of Spengers before doing corned beef hash and eggs and stout at Brennan's as the sun came up! And I'll never forget all the cat fish, hush puppies, and beer we tried to consume at that little place on the Gasconade River! I still have his pipe collection he transferred to my trust the day he quit smoking. They sit atop my roll top and occasionally puff curls of memories. He turned Liana and I on to attending midnight Mass at Notre Dame. He dropped by a year or so ago, as he always did every year when Liana and I needed help putting the leaf net atop the koi pond. Our English Fox Hound Gary Cooper and Wink were buds. Liana made pasta. We talked into the night. There were a few tense moments, unlike all those years before, and when I took him to the airport, we disagreed on things that we shouldn't have. Gawdfrey, I'm starting to sound like a line from The Big Chill. Well, there are some things and some people you never expect to lose. Wink was one of them. I loved being his friend and spending countless hours working together on resource management and water quality. But most of all I'll miss someone truly INCREDIBLE! If you knew Wink Hastings, you'll appreciate the significance of that word. Ciao, buddy! bill 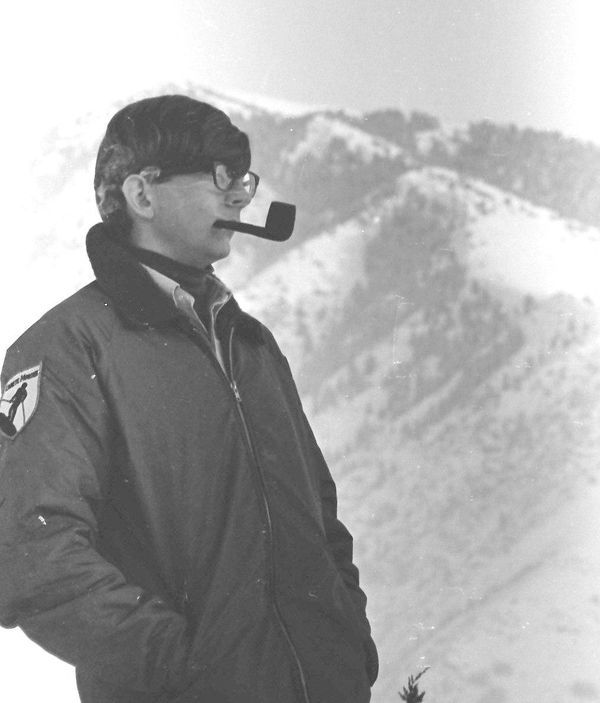 I am just finding about this sad news. I fondly remember skiing with Wink & attending rock climbing classes from Wink & my ex Dan Carter. We all use to joke about not having fingerprints from climbing on the limestone rock in Logan Canyon. I can still hear Wink's laugh & see his eyes twinkle & yes David what a perfect photo of Wink & that stinky pipe. I got in trouble for cleaning out the gross coffee pot at their apartment one day! Such fond memories. Wink, I know you are hiking & climbing & skiing endless runs. RIP

Dorothy where are you? Brian lives in Flagstaff and Danny Krause lives in Montana.
Email me nishimotog@aol.com. I'm in Phoenix but should be heading to Wind River to work in. Lab there. 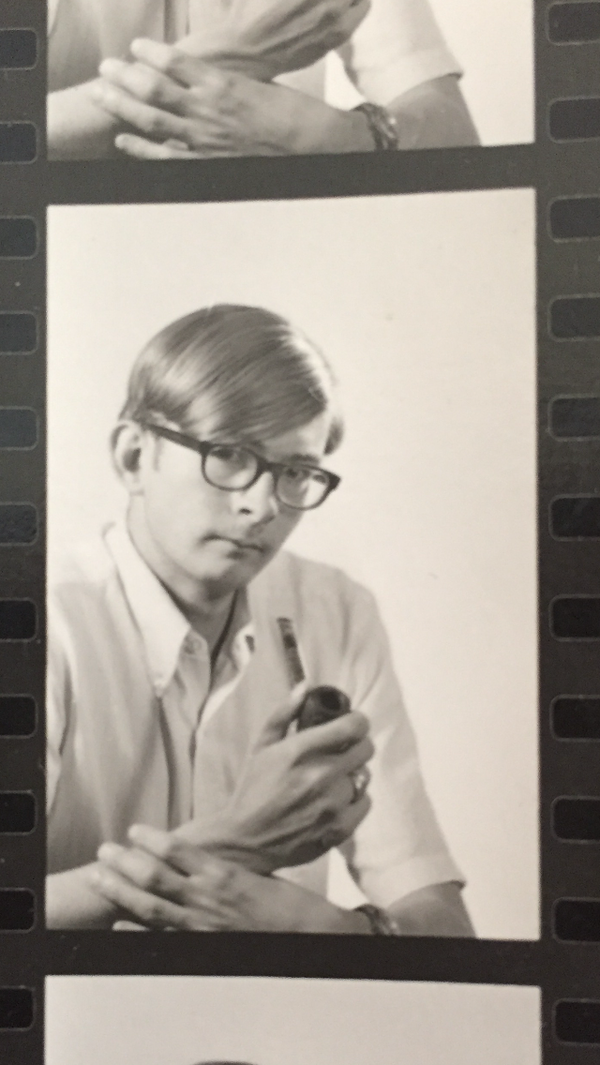 Holy smokes! I forgot about that pipe!!! What's hilarious is that I have the exact same
glasses on right now. THank you for posting.