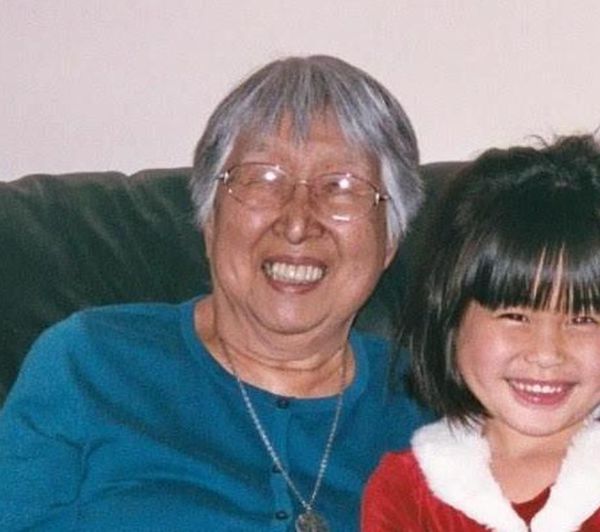 As a high school student in an internment camp, she wrote a "Letter to America," declaring, "I worship you in spite of the errors"

Betty Kanameishi Nakanishi died on December 6, 2010 in Chicago.  She was 84, devoted wife, mother, grandmother.  She had a long career as a journalist and magazine editor, but she will be remembered by many as a witness to and historian of treatment of Japanese-Americans in the United States during World War II.

Betty Kanameishi was fifteen when she and her family were forced to move from their Los Angeles home to an internment camp in Lamar, Colorado, known as Camp Amache.  This was one of ten such camps that had been set up to house more than 110,000 Japanese Americans living on the West coast during World War II.  Betty wrote an essay -- My Dear America -- that was published on April 30, 1944 in the camp’s high school yearbook. It captures her feelings of loss and love for her country on the eve of her graduation from high school and release from the camp.

It is hard to believe that it has been but two years since I said “good-bye” to you.  Yes, just two years ago this very day I ceased to be a part of you. Although I knew all along that this parting was but temporary, I could not help but be enveloped in grief.

The new surroundings and experiences occupied all my attention at first, and my loneliness for you was crowded out. But as I became used to the surroundings and as the new experiences lost their exciting nature, that lonely feeling started seeping into me until eventually my whole being was filled with it. I thought I would go mad, and I tried in vain to push this loneliness from me. I crammed my hours with continuous activity so that there would not be a chance for that loneliness to enter my being and begin its steady flow through my veins.

This plan worked wonderfully at first, but the activities soon became a drudgery to me.  As soon as this happened, loneliness renewed its advance toward me. I knew that I could not escape, so in desperation I tried to thrust the very thought of you out of my mind. I immediately regretted that I had even tried to do such a thing; I felt that I had been unfaithful to you. It was foolish and stupid of me to even think that I could forget you. If I were away from you for an eternity, I would still remember you, for you are a part of me. Without you I would be nothing.

You are my first love, my last love, and all the loves in between. I worship you in spite of the errors you have made. Yes, you have made mistakes, and you have roamed on many wrong roads, but every-one makes mistakes.  Of course, just because everyone makes mistakes and that does not excuse your mistakes. But if you had not made mistakes to learn what not to do, you would not be what you are today. You must continue to profit by the mistakes you make.  All I ask is that you do not make the same mistake twice; that is inexcusable even in the eyes of one who loves you so.

It is impossible for me to express in any number of words how much I have missed you. Maybe I can give you an idea of my desire for you by telling you that I have come close to insanity more than once longing to hear your genuine laughter that comes right from your spacious and generous heart, to see that mischievous twinkle in your eye that displays your unmatchable sense of humor and to walk hand in hand with you holding my head high with pride overwhelming me.

I shall not have to wait very long for these things now. I shall no longer desire for you in vain, for I shall be with you within a few weeks. Now instead of trying to banish you from my thoughts, as I once so foolishly tried to do, I am trying to revive the dormant little memories of you which have had a long slumber in my subconscious mind. I want to prepare myself for our momentous meeting after two long years of separation so that I shall not disappoint you. All my present prayers are that you will be as happy to have me back with you again as I shall be to be a part of you again. I hope that your faith in me has grown since the last time I saw you. That faith must grow for my faith in you to grow.

I shall impatiently be counting away the days until I can look straight into your unswerving eyes and feel the grip of your firm and steady hand as you greet me. Until that time when we shall meet again, “Au Revoir.”

In unpublished memoirs Betty described her life in the winter of ’41-42 and the summer of 1942.

In the winter of ’41 “a problem confronted the United States and particularly the Pacific coastal states of California, Oregon, and Washington: what to do with the “Japs” in their midst. “Japs” was what we were called derogatorily and for convenience. “We” refers to the Issei, the immigrants from Japan who had become permanent residents but were barred from citizenship, and the Nisei, their born-in-the-USA offspring.”

The government declared an 8PM curfew.  The residents were ordered to turn in contraband (weapons, short wave radios, binoculars, cameras) at their nearest police station. In just a few weeks, Betty’s parents “disposed of their flower shop business of 25 years, a truck, a passenger car, our furniture, and other possessions—all at garage sale prices.  I was going to leave my home, my neighborhood, the city where I had lived all my life. I was to depart from my childhood friends, many of whom I had known since kindergarten, possibly never to see them again.”

For a few months, Betty and her family lived in a barrack built on the vast parking lot of the Santa Anita racetrack.  “There was an ugly time at Santa Anita that I clearly remember. It was precipitated by some policemen from a nearly town who took it upon themselves to invade our Center to look for ‘contraband.’ As a result of the riot, we were placed under military law and the militia moved in. How scary it was to peek out the window to see military vehicles passing by with soldiers manning machineguns! This menacing scene reinforced the barbed wire fences surrounding the Center and the armed watchtowers to punctuate the fact that we were indeed prisoners and the perception that we were considered enemies of our own country just because of our ethnicity.” 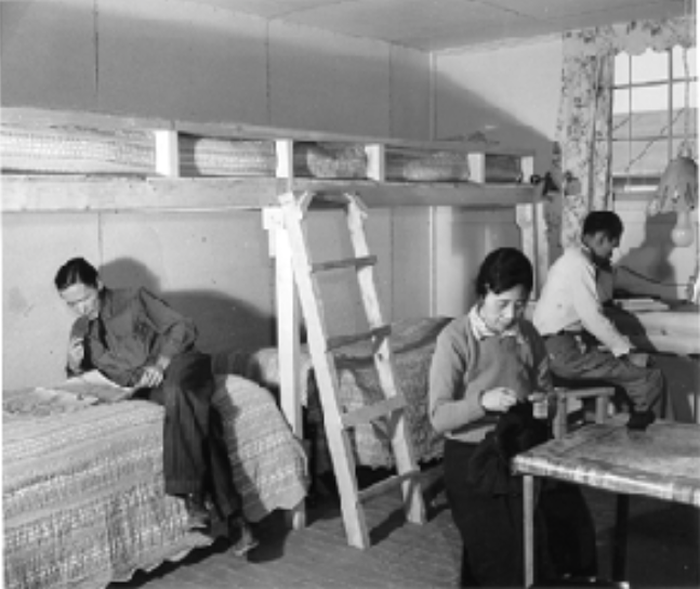 Betty and her family were a few months later moved by train to the Granada Relocation Center -- known as Amache--“one of ten concentration camps where Japanese Americans were incarcerated during World War II. This encampment, located in a desolate area of southeastern Colorado near the Kansas border, is where I lived with my family among about 7,000 Japanese Americans as prisoners of the USA from September of 1942 through May of 1944.”  Betty, her parents and two sisters were housed in a large room, with army cots with thin mattresses at one end and table and benches and a study niche at the other. They had communal facilities: dining hall, laundry room, a bathroom of stall toilets with no doors and a communal shower room.

One block of barracks was set aside for schools. Teachers were college-educate internees “as well as Caucasian teachers brought in from the outside.”  Betty was able to pursue her interests in being a reporter and editor for camp publications.  She was editor of the high school bulletin and an editor of the yearbook, where she wrote an essay that was published called My Dear America.  “Adults in the camp were put to work, for which they were paid $16 a month or $19 if they were professionals.”  Betty worked weekends in the hospital dining room.

People were allowed to leave the camp as long as they relocated away from the West Coast. Many of the boys she knew were drafted when they reached the age of 18.  “Thanks to a case filed in court in the name of Mitsuye Endo, Japanese Americans were released from relocation centers unless just cause could be shown why they should be kept in custody.”

Betty graduated from the camp high school and went on to get her college degree from the University of Wisconsin, Madison. After working in Chicago for a few years, she was accepted at the Columbia University Graduate School of Journalism in New York City, class of 1954. Upon graduation she was hired as a reporter for an upstate New York newspaper.  “Just as I was about to leave, I received a telegram from the paper’s publisher telling me their offer had been withdrawn.” Sensing something wrong, Betty contacted a friend who worked on the paper. He confirmed what she had suspected—the publisher refused to hire her because she was Japanese. Devastated, Betty gave up her dream to work as a newspaper journalist and spent the rest of her professional life writing and editing medical trade journals in Chicago. 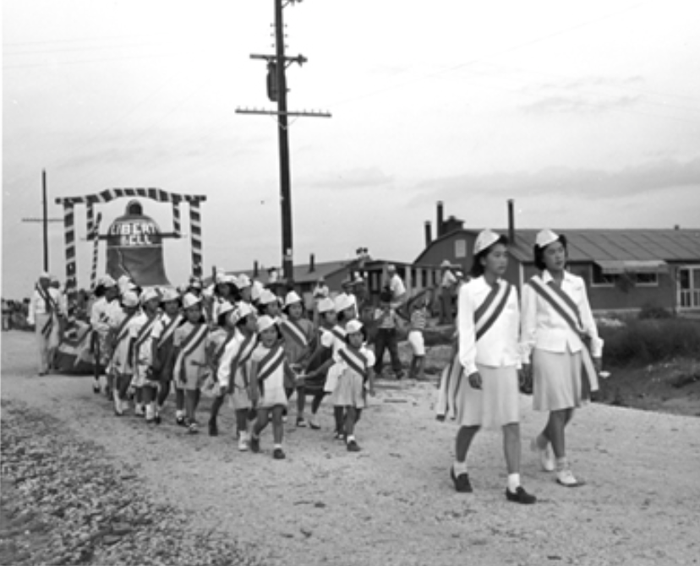