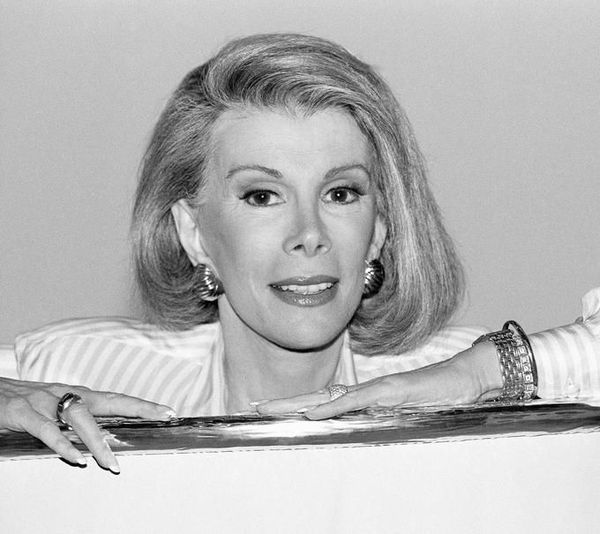 Joan Rivers, Who Shocked Audiences and Blazed Trails, Died at 81

"Brassy in public, classy in private," Rivers was loved, feared and respected

Joan Rivers began her caustic comedic career in a dark, dingy cellar, the kind of "awful place in the Village where you walk down two steps -- both literally and socially --when you walked in," as the club, Greenwich's Bitter End, was once described.

She worked herself up from that cellar to penthouse apartments, rubbing elbows and wagging tongues with elites. She blazed a trail for generations of performers, garnered global acclaim, and was a feared and revered presence on the red carpet. 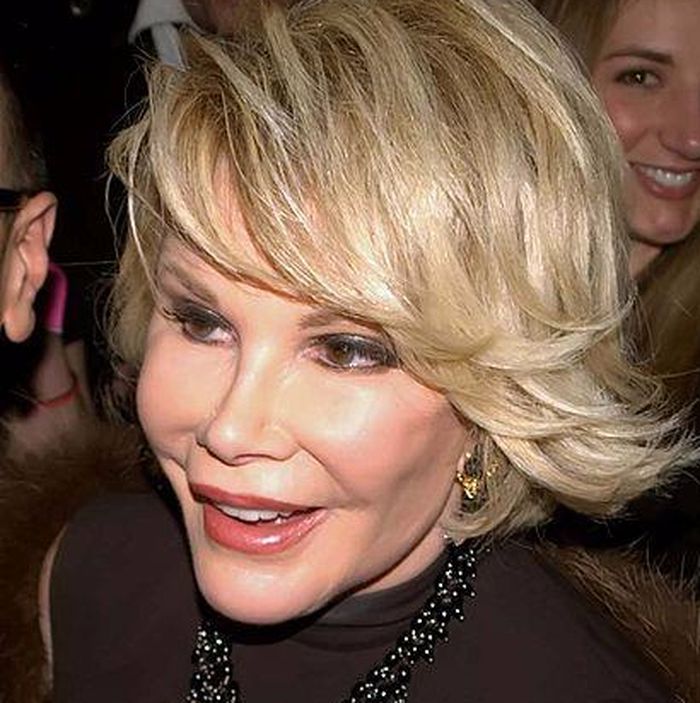 Rivers died on September 4, 2014 near her home in Manhattan, one week after she suffered a cardiac arrest on the operating table during a minor throat procedure. She was 81.

"It is with great sadness that I announce the death of my mother, Joan Rivers. She passed peacefully at 1:17pm surrounded by family and close friends. My son and I would like to thank the doctors, nurses, and staff of Mount Sinai Hospital for the amazing care they provided for my mother. Cooper and I have found ourselves humbled by the outpouring of love, support, and prayers we have received from around the world. They have been heard and appreciated. My mother's greatest joy in life was to make people laugh. Although that is difficult to do right now, I know her final wish would be that we return to laughing soon." - Melissa Rivers

The reaction to the news was as rapid-fire and devastating as Rivers' comedic delivery. 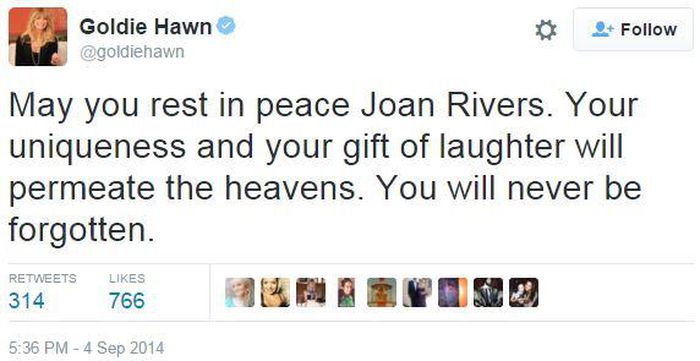 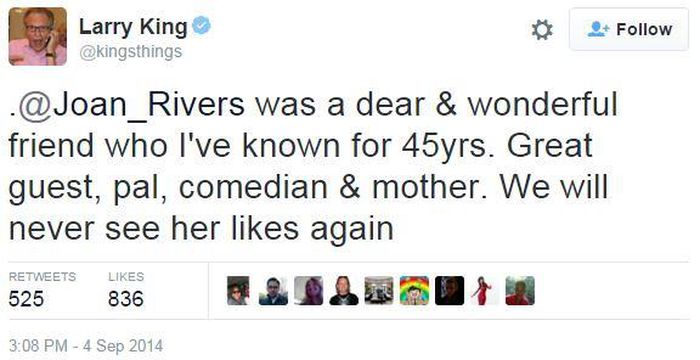 Such an outpouring of affection for a persona as brash, insulting and raw as Rivers was might be unexpected in any other industry. That could be because Rivers was “brassy in public” and “classy in private,” according to columnist Cindy Adams, who spoke at her funeral service, which was attended by 1,500 people.

Howard Stern, who gave the hour-long eulogy described her as a “troublemaker, trail blazer, pioneer for comics everywhere, never apologizing and never caring what people thought.”

The affection was earned after a 55-year career in which she publicly scorned A-listers, but privately supported and rooted for her colleagues. 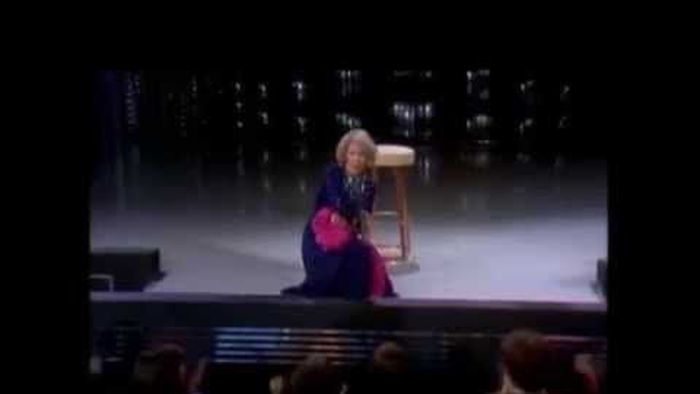 Rivers was born June 8, 1933 in Brooklyn as Joan Alexandra Molinsky, the daughter of Russian Jewish immigrants Beatrice and Meyer Molinsky. Her family later moved to the suburbs of Larchmont, but she returned to the city to attend Barnard College. She dabbled in advertising, fashion and was even a tour guide at Rockefeller Center, before deciding she wanted to poach work from Elizabeth Taylor.

"I'm Jewish, and I'm from Brooklyn and my real name was Molinsky. I remember a dentist saying to me, a Jewish girl from Brooklyn named Molinsky? You're not going to make it. And I thought, 'Oh, yes I will Dr. Feidelman, yes I will," she said in an interview shortly before her death.

The doctor wasn't entirely wrong. Rivers changed her name in the mid-1950s, but it was a mostly failed bid to get acting gigs. (She did star in a short-lived play titled "Driftwood," alongside another unknown Jewish girl from Brooklyn -- Barbra Streisand).

"I couldn't get into the agents" for acting gigs, she said. "Unless the secretary liked you. So they'd say, 'She's funny. You should see her.' One secretary said to me, 'My husband is a comedian and he makes $6 a night in comedy stores.' And I said, 'I can do that!' and I literally went into comedy because all this would be temporary."

During the early 1960s, the accidental comic began making a name for her bawdy sets at Greenwich Village clubs like The Bitter End and Gaslight Cafe. She performed alongside future legends like Woodie Allen, Richard Pryor and Bill Cosby. 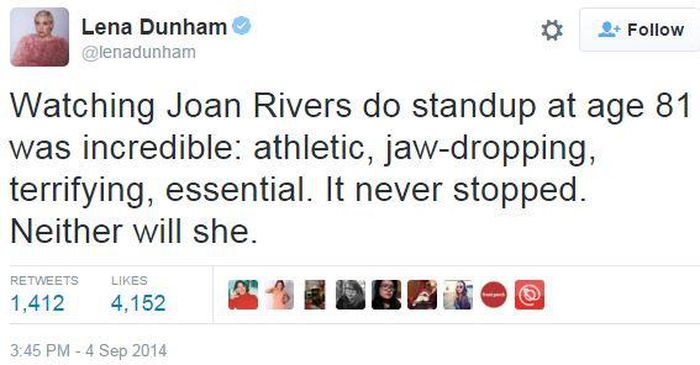 It didn't happen over night, and some crowds were put off by her raunchy style. She was considering quiting the business until she received some unexpected support from one of her idols.

"I was bombing one night at The Bitter End and Lenny Bruce sent a note saying 'You're right, they're wrong,'" she recounted. "I would probably not be sitting here if Lenny Bruce had not sent this poor pathetic thing."

Even before her public ascent, she was already passing that support and encouragement on. When Life sought an interview with her in 1963 -- two years before her first appearance on The Tonight Show, which is widely credited for her success -- she instead dragged writer Tommy Thompson and entertainment editor to Richard Meryman to see Richard Pryor's act, and shift the article to focus on him (it was Meryman who described the club as "two steps down").

She later recalled that while she might be funny, Pryor, an otherwise unheard of upstart, offered medicine the nation needed as it grappled with Jim Crow and civil rights.

"[Pryor was] funny, funny, funny. And sad. It was acting, it was comedy, it was social comment it was everything," she later recounted in a biography of Pryor. "I may do some comparable things, but on a much more shallow scale. I do what's painful for the middle-class woman. That a whole different thing. He does what's painful for somebody who has really lived through pain."

It was that kind of support and encouragement that led Rivers to be credited with helping launch the careers of not just Pryor, but Chris Rock, Kathy Griffin, Billy Eichner and many others. She also influenced and carved out space on stage for scores more. 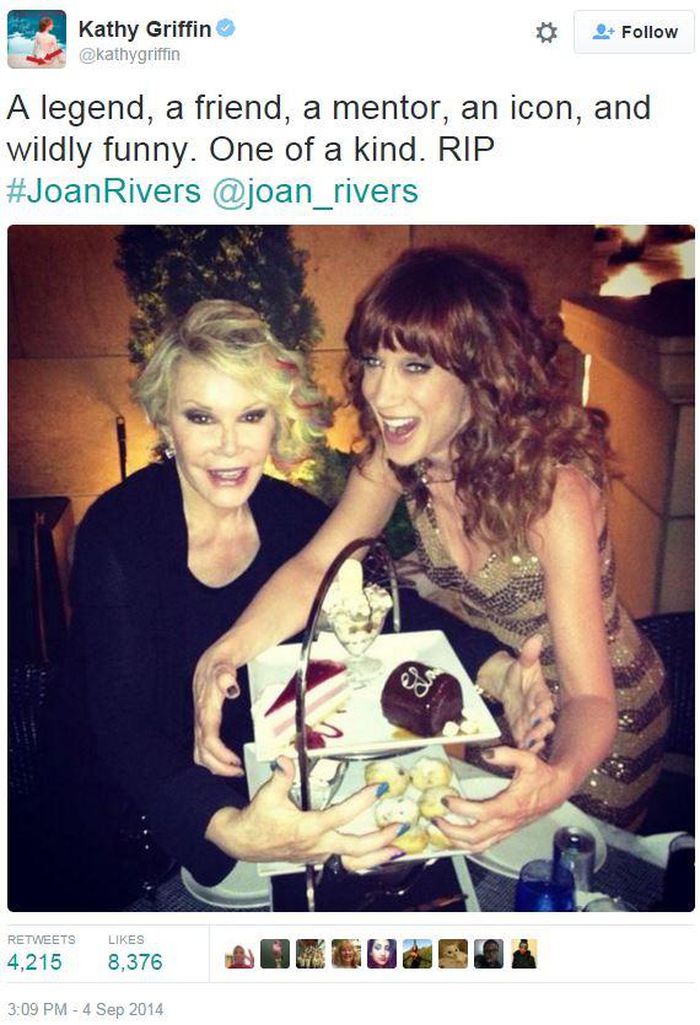 Once Rivers caught the eye of The Tonight Show host Johnny Carson, the rest of her career unfolded so publicly it's a wonder whether it merits recounting. The bulletpoints everybody knows. She was a regular on the show for more than two decades, then became the first woman to host a late night show of her own, with The Late Show with Joan Rivers in 1986. Three years later she hosted The Joan Rivers Show, winning a Daytime Emmy. 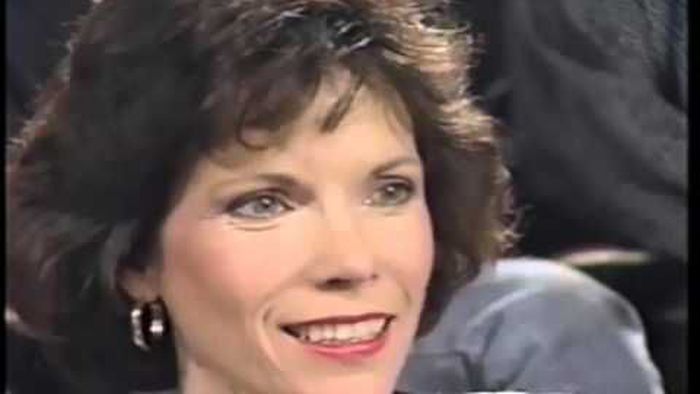 She authored a dozen books, and somewhere in between took her place adjacent to the red carpet, where she lashed at celebrity fashion faux pas and gave birth to an era of "Who are you wearing?"

RIP Joan Rivers... You made fun of my boobies just last week and it was an HONOR. Thanks for making so many people laugh here on Earth. ???????? 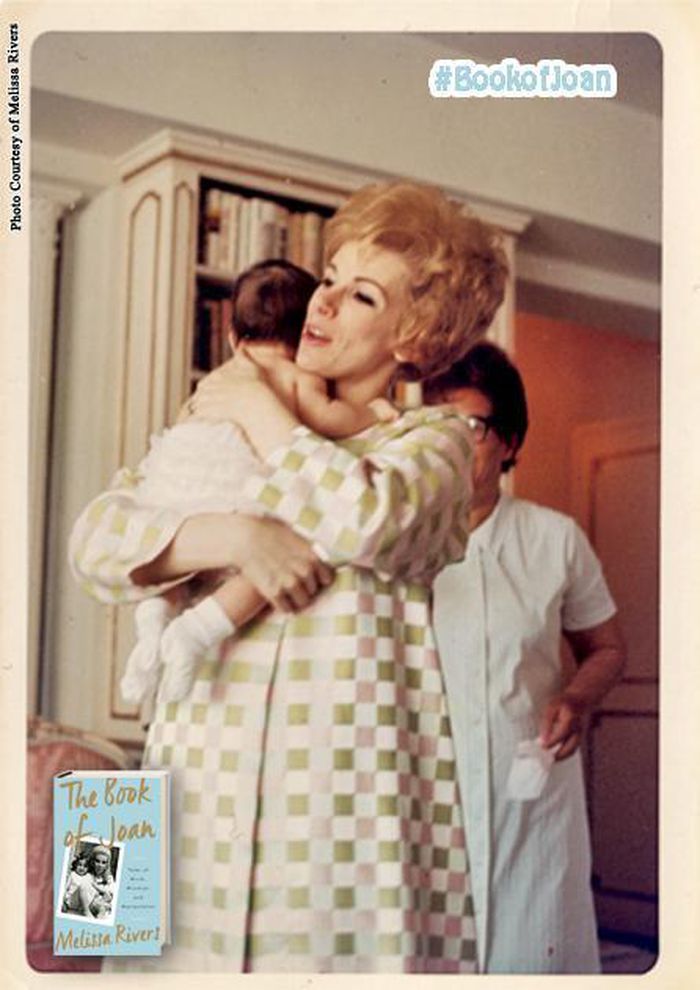 During her rise, she gave birth to her daughter, Melissa, in 1968 with husband Edgar Rosenberg. Rosenberg committed suicide in 1987.

She told NPR about the kind of parent she tried to be:

"When I was pregnant, I was sitting with a very famous comedienne and her little girl in the park, and her little girl fell down and cut her knee — and ran to the nanny. And I said right then and there, 'My child will run to me.' And I, from the beginning — we stopped everything at 6 p.m. We always had a family dinner even if we went out afterward and had another dinner with friends. Everything stopped at 6. I would take the book and cross off everything that didn't have to do with Melissa. I was a Brownie Scout mother. And those uniforms. You don't know what I sacrificed for my daughter. I mean, Terry, please — a Jewish woman in a khaki dress. Not to be believed."

She performed up until her death, taping an episode of Fashion Police two days before the botched surgery, and releasing a podcast the day before.

Yuks aside, heer sets have always hinted at her personal struggles, including self-image and aging. Those messages were as painful to tell as they could be unpleasant to hear, and that, Rivers said, is what often drew in the crowds.

"Comedy is truth, and you should not apologize for it. You're going to get what I think is the truth, and it's going to be raw," she said.