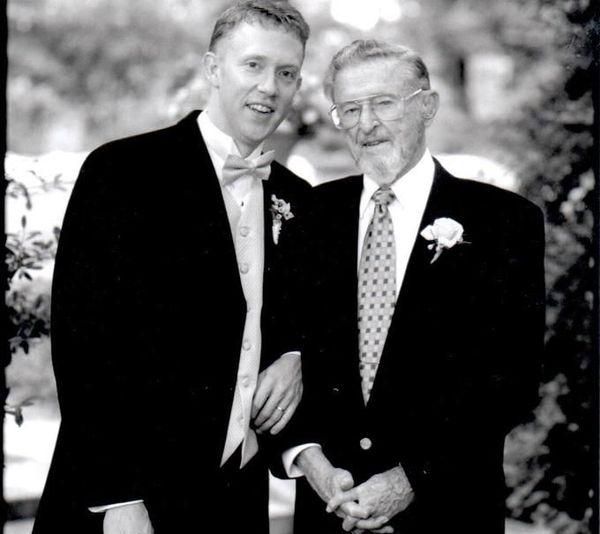 My favorite memories of Grampy were watching him operate in "impresario mode." One of my earliest memories of him is the first time we went to visit Eastpointe, all of which, he explained to me, he had helped conceive, plan, and build -- up to, and including, the lake behind his house. I must have been about 7 or 8, because I was awestuck at the idea that someone could be so powerful as to conjure up a lake, and I said so. "I needed somewhere to sail my boat," he replied matter-of-factly, which only amplified the impression. Soon after, he took me out on the little yellow Sailfish he used to own and taught me to sail.

This is a trait that never diminished in Grampy in all the years afterward. When he moved on to the Waterford, he quickly took command of the executive board in charge of entertainment and used his position to arrange an expense-paid trip for me to come down and give a talk about politics. These trips included a "visiting dignitary" dinner with his fellow board members, who were lovely and who I got to know quite well. While I was officially the guest of honor, it was clear that Grampy himself -- always the master of ceremonies -- was at least as much of an attraction as his grandson from the north.

I felt a twinge of guilt when another speaking invitation arrived a couple of years ago, because I knew Grampy was no longer in charge of arranging the Waterford's entertainment and had plainly strong-armed his successor into doing his bidding. But I think one of the joys of knowing him was that you didn't mind this. I kept going down, and things proceeded just as they had before, with Grampy throwing dinners and assuming his customary position at the center of the action, to everyone's great enjoyment.

One of the hardest things about watching him age was that it's difficult to be an impresario when you're nearly deaf. When I went to give my talk last year, Grampy, unbowed, arranged a dinner in the private room of the club with his fellow board members, Peggy and Bill, as was our custom. We got dressed and went down early to strategize about where to sit, because he worried all day that he wouldn't be able to hear enough to keep up with the conversation. In the end, the four of us found a cozy table and had no trouble conversing, since most of our party was hard of hearing and talking louder came naturally. It was Grampy who suggested we stick around for dessert.

My lasting memory of that evening, though, comes courtesy of Dennis, who squired Grampy to the front row for my talk and equipped him with microphone and cue card to introduce me -- another custom Grampy enjoyed. We'd worked up some brief remarks. While Grampy could read, his short-term memory was so spotty that he'd practiced during the afternoon to make sure he could perform to his usual standard.

He did so with ease. But ten minutes into my talk, he turned to Dennis, alarmed that he'd forgotten to introduce me. He had no recollection. Dennis assured him that he had indeed delivered his remarks and that we could watch them later on. In a display of foresight I could only wish for, Dennis had videotaped Grampy's introduction on his phone. Afterward, over beers and Manhattans, we sat on the couch together and watched Grampy beaming as he got to see himself performing the role he loved best.

One of my favorite memories of Grampy is of working out with him at the Waterford gym when I visited him 3 years ago. It's not everyday you get to do the elliptical machine next to a centenarian! 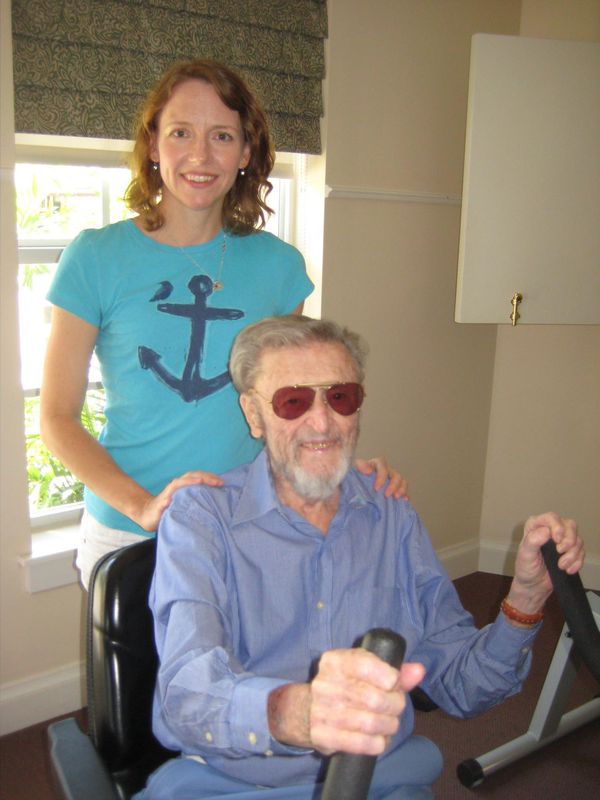