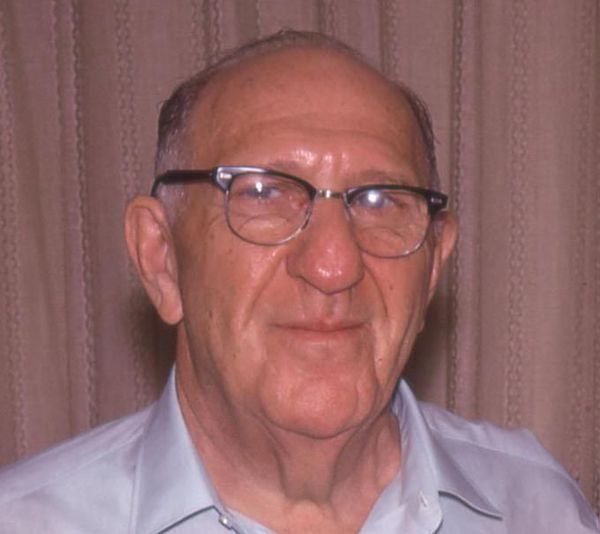 To me, Grandpa Hy was a jovial, friendly man with a belly laugh.  When he died in 1979 at age 79, I was only dimly aware of his extraordinary career.  At his funeral I was surprised to see the former mayor of New York, Abe Beame, show up along with other dignitaries -- and hundreds of other people.

In the years after his death, I've learned more about this remarkable man.  I've created a more precise chronolgy in the LifeTimeline but the gist was: he started out as a pants cutter in the garment district (which he apparently was pretty bad at). He got involved in local union organizing and went to law school at night. While in his twenties and thirties he ran for state assembly on a platform of better housing for the working class.

Here's mom describing his younger days: I've met people who  knew my dad when he was still living at home in the Williamsburgh section of Brooklyn. The streets were made of cobblestone. Every now and then, this young man --still in knee pants--stood on a box and spoke in a loud voice about living conditions and how to make them better.

When I was young, my dad had a favorite song he would sing to me: it was called The Goldfields of Nevada. I don't know why this Brooklyn boy liked a song about Nevada. The lyrics went like this: "In the goldfields  of  Nevada, everywhere I used to roam, there was gold to be had, but  my luck it was bad, and I longed for home sweet home. Then you came and stole my heart away, and that's when I knew that I found  gold when I found you. 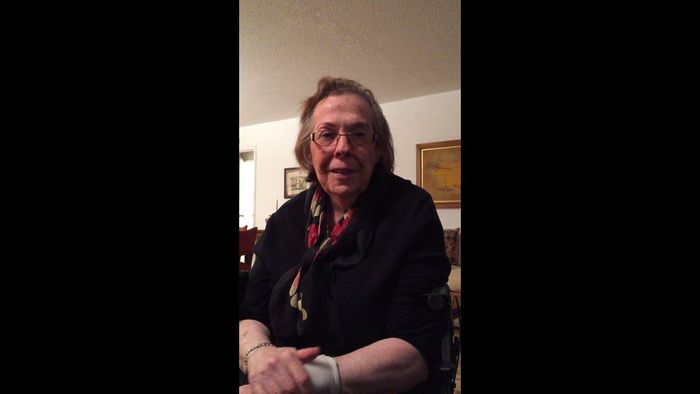 He eventually founded Local 340 of the Amalgamated Clothing and Textile Workers. He and his friends who founded the local would remain there literally until their deaths.

He also helped found the Brooklyn Women's hospital -- before the days of Medicaid -- to provide poor women with health care.

This is a picture of him giving an organizing speech as a young man. 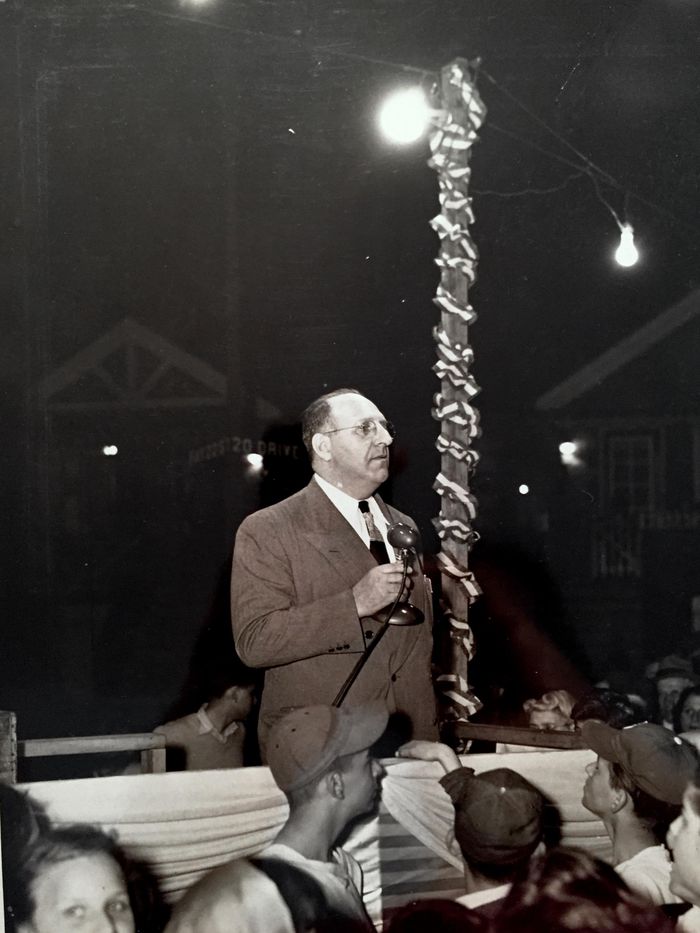 After he died, when I was working as  journalist and interviewing a labor consultant, he told me an amazing story.  This fellow was working organizing a union at a clothing company called JP Stevens. There was some big meeting and various people were going up to the microphone to talk about the issues. Then these elderly man stood up in the back and, without using a microphone, gave a stirring and memorable speech. Turns out, it was grandpa.

Here he is addressing a different union gathering:

His family history is inspiring in other ways. He had seven siblings. Even though they grew up in a tenement in Williamsburg, Brooklyn -- his immigrant father was a tailor -- the children went on to become: a doctor, a dentist, a pharmacist, a lawyer and a small business owner.  The siblings were vigilant about taking care of each other, each one helpign to pay for the education of the other.

He was supportive and loving dad to his only child, Sandra Nemser (my mom). I love this picture of them and cant help wonder what they were talking about: 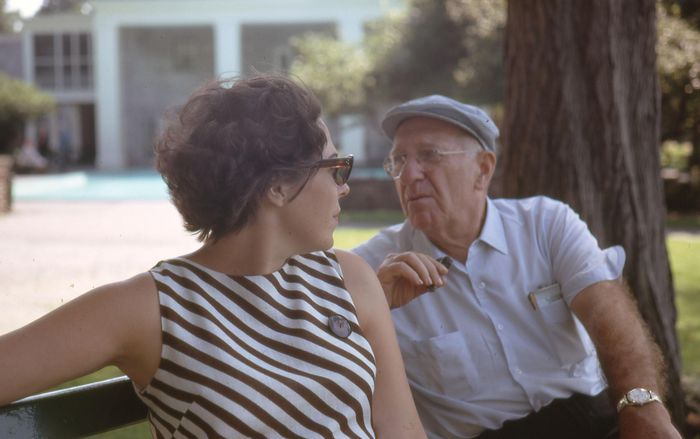 And he was a very sweet grandpa to his two grandchildren. 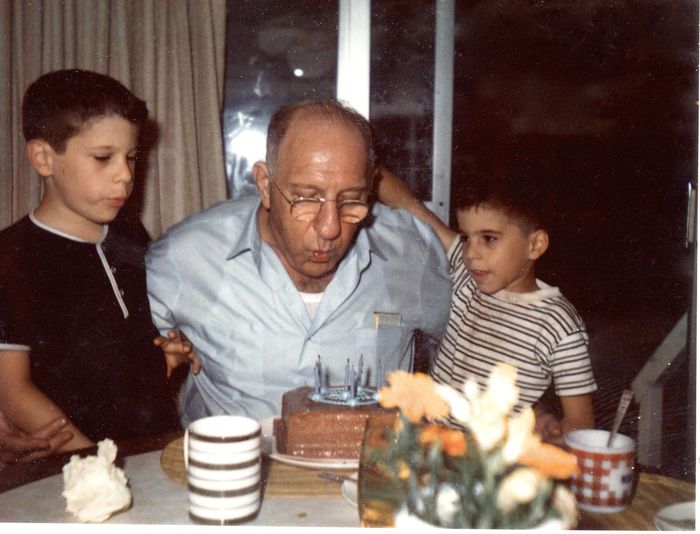 Here's the obituary in the Local 340 Leader, the newspaper of the union for which he was geneal counsel:

Hyman Nemser, legal counsel for the Retail Clothing Salesmen's Union since 1934 and a leader in organizing the men's retail industry, died on March 8 of a heart attack at the age of 79.

Nemser was walking from a Local 340 negotiating meeting with union president Julius Frankel when he was stricken. The shocked Frankel watched while police and ambulance attendance tried to revive his long-time comrade.

The funeral, which took place Sunday, March 11, was held at the Riverside Memorial Chapel and was attended by more than 500 persons, included many labor, industry and government leaders, and Local 340 members. Frankel delivered a moving personal tribute to his friend.

Nemser was survived by his widow, the former Mildred Sherman; his daughter Sandra Waldman and son-in-law Martin G Waldman; his two grandsons, Michael and Steven; brothers Philip and Jacob and a sister, Victoria.

In an obituary notice, Local 340 officials and Frankel, secretary/treasurer Louis Miller and business agent Dan Briskin wrote: "It is with profound grief and shock that the Retail Clothing Salesmen's Union, Local 340 of the Amalgamated Clothing & Textile Workers Union, mourns the sudden death of Hyman Nemser, its legal advisor, friend and champion for more than 46 years. His devotion to the labor movement, to this union, and to the men and women we represent was the foundation of his life. We will never forget him; we will not see his kind again."

The ACTWU accolade ran: "The officers and members of the Amalgamated Clothing & Textile Workers Union record with deep regret the passing of our long-time colleague and friend Hyman Nemser. An officer of our Retail Joint Board, he served his affiliate with distinction and devotion. He was the legal advisor of the Joint Board and his wisdom was at the call of many other ACTWU units. A social activist all his life, he served many good causes int the community. He was an orator of note and used his talent for many progressive purposes. We offer our sincere condolences to members of his family." It was signed by Murray H. Finley, presisdent;  Jacob Sheinkman, secretary-treasurere; Sol Stetin, senior vice president and William M. DuChessi, executive vice president.

In addition to his association with labor unions, Nemser also was involved in charitable activities. He was an officer for many years of the Reunion of Old Timers; a member of the Philanthropic 50 of the Federation of Jewish Philanthropies; President of Branch 502E of the Workman's Circle; member of the board of trustees of the Brotherhood Temple; member of the Delfor Lodge of Knights of Pythias.  He had been very active in the Brooklyn's Women's Hospital and served as its president in 1970.

I've created a more detailed chronology at LifeTimeline and there are some amazing stories in the LifeQs area.