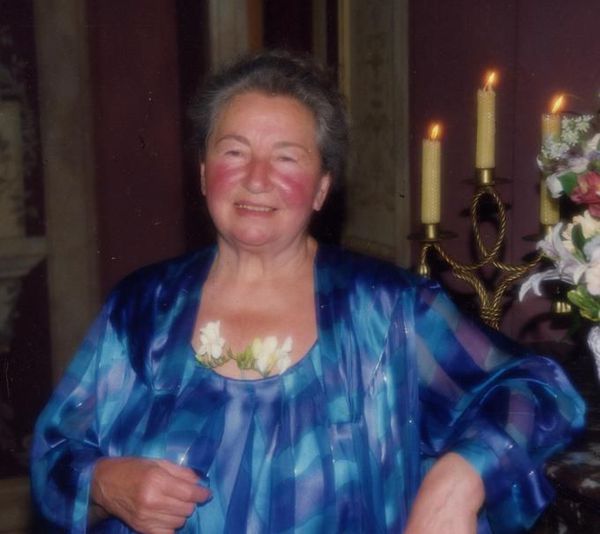 An extraordinary woman, who most definitely did not "miss the moment"

By Arianna Huffington and Agapi Stassinopoulos

WHAT I LEARNED FROM MOMMI (Arianna) 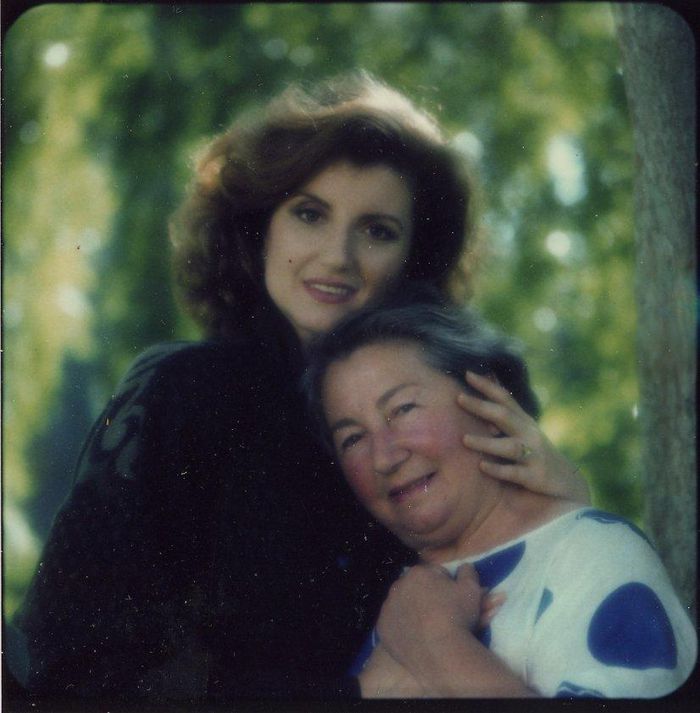 I still remember, when I was twelve years old, a very successful Greek businessman coming over to our home for dinner. He looked run-down and exhausted. But when we sat down to dinner, he told us how well things were going for him. He was thrilled about a contract he had just won to build a new museum. My mother was not impressed. "I don't care how well your business is doing," she told him bluntly, "you're not taking care of you. Your business might have a great bottom line, but you are your most important capital. There are only so many withdrawals you can make from your health bank account, but you just keep on withdrawing. You could go bankrupt if you don't make some deposits soon." And indeed, not long after that, the man had to be rushed to the hospital for an emergency angioplasty.

[One] of my mother's gifts was to be in a constant state of wonder at the world around her. Whether she was washing dishes or feeding seagulls at the beach or reprimanding overworking businessmen, she maintained her sense of wonder at life. And whenever I'd complain or was upset about something in my own life, my mother had the same advice: "Darling, just change the channel. You are in control of the clicker. Don't replay the bad, scary movie."

My mother had actually taught my younger sister, Agapi, and me how to meditate when I was thirteen years old...When I was growing up, meditation was seen as a cure for just about everything. My mother had convinced us that if we meditated, we would be able to do our homework faster and improve our grades. We knew that meditation made us more peaceful and less upset when things didn't go our way, but we also realized that it made us happier. And now, science has provided evidence to back this all up. If anything, my mother was underselling the benefits of meditation. Science has caught up to ancient wisdom, and the results are overwhelming and unambiguous.

Some people are naturally time affluent. My mother, for instance. In fact, when it came to time, she was filthy rich. She moved through her days like a child does, living in the present, stopping, literally, to smell the roses. A trip through the farmers' market might be an all-day affair with little thought of All the Things That Must Be Done. I still often think of the advice she'd give my sister and me when we were faced with a hard decision: "Darling, let it marinate." In other words, give yourself the time to think about and live with the consequences of the decision.

[My mother] was a towering example of the joys of slowing down. Until her death in 2000, she and I had an unspoken deal: Hers would be the rhythm of a timeless world, a child's rhythm; mine was the rhythm of the modern world. While I had the sense every time I looked at my watch that it was later than I thought, she lived in a world where there were no impersonal encounters, and never a need to rush. She believed that rushing through life was a sure way to miss the gifts that come only when you give 100 percent of yourself to a task, a conversation, a dinner, a relationship, a moment. Which is why she despised multitasking.

We scattered my mother's ashes in the sea with rose petals, as she had asked. And we gave her the most beautiful memorial, with music, friends, poetry, gardenias, and, of course, food, lots of food: a memorial that truly honored her life and her spirit. Everyone felt her presence there, hosting, presiding, shining her light on us. In our garden, we planted a lemon tree in her honor that has been producing juicy lemons ever since. And we installed a bench engraved with one of her favorite sayings that embodied the philosophy of her life: "Don't Miss the Moment."

I was blessed to have a mother who was incapable of having an impersonal relationship with anyone. This doesn't mean my mother was perfect, but she did live in a constant giving mode. If the FedEx man arrived to drop off a package, my mom -- or Yaya, as everyone called her -- would have him come in, sit down at the kitchen table, offer him something to eat. If you went to the farmers' market with my mother, or to a department store, you'd better be prepared for a long discussion with the shop assistant or the farmer about their lives before she even got around to asking about something she wanted to buy. That intimacy with strangers, that empathy toward everyone she encountered, was something I had been surrounded with since I was a little girl in Athens.

[My mother's] life was filled with giving moments. Wherever she was -- in an elevator, a taxi, an airplane, a parking lot, a supermarket, a bank -- she would reach out to others. Once, a stranger admired the necklace she was wearing; my mother took it off and gave it to her. When the astonished woman asked, "What can I give you in return?" my mother said, "It's not a trade, darling, it's an offering." Toward the end of her life, she would always arrive at the doctor's office with a basket of fruit or a box of chocolates for the nurses. She knew that in an office where patients brought their anxiety and pain, the gesture would help change the atmosphere. Her tenacity in breaking through the barriers that people put up around their hearts was both enchanting and comical. If one of the nurses was, as she put it, "on automatic" and didn't take the time to be friendly or personal, my mother would whisper to me, "This one doesn't want to budge," and would start looking for a way to give her extra attention. She might produce a little treat from her purse--a package of nuts, a special kind of chocolate -- and give it to the woman, knowing she would get a smile. Giving was a way of being for her.

When she died, my mother left no will and no prized possessions, which is not surprising, considering her habit of giving things away. I remember the time we tried to give her a second watch; within forty-eight hours she had given it to someone else. What she left us with is the treasure house of her spirit. It's as though certain gifts can be bequeathed only at one's death -- that while she was alive she so embodied the qualities of nurturing, giving, and unconditional loving that it felt as if those dimensions of life were taken care of for all those blessed to be in her orbit. Why learn how to cook when you live with the Iron Chef? After her death it became much clearer to my sister and me that if our life's journey is to evolve as human beings, there's no faster way to do it than through giving and service.

WHAT I LEARNED FROM ELLI (Agapi) 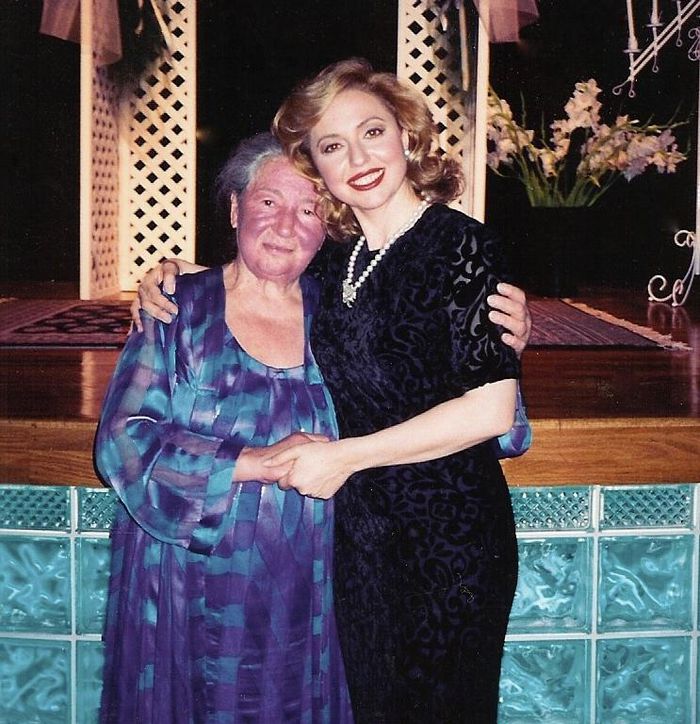 There's not a single day that I don't feel my mother's presence with me, especially when I am in festive gatherings where there are people and food involved. She never missed a chance to celebrate life. She was the quintessential caretaker, an earth mother who infused everyone around her with her infectious spirit of generosity and inclusiveness. To my mother, there was no such thing as hierarchy.

She had a remarkable ability to respond to life's call in the moment, in the most ordinary and extraordinary ways. She used to say her religion was the human communion. Nothing was more important to her than the kinds of heart-to-heart connection that can make time stop and give meaning to everything. To this day, people who knew her still quote from her well of wisdom. I want to share with you today some of her soul-stirring sayings, to inspire you.

Let it marinate. In the moments of indecision, of not knowing what to do or which direction to turn in, she would absolutely relieve any self-imposed pressure by saying, "Darling, let it marinate" -- allowing us the luxury of time. She came from the knowing that there is no urgency in spirit.

Change the channel. This was her signature phrase to shift from a negative thinking pattern to a more positive mindset, from disappointment to trust, from sadness to joy, from upset to humor, from rushing to relaxation. If someone around her was having a panic attack, my mother would simply shout out, "Change the channel!" It was like a directive to your brain to go in a different direction -- and by god, it worked.

Don't miss the moment. In the midst of our to-do lists, multitasking and moving from one thing to the other, she would find ways to connect with the bank teller, the waiter serving the food, the supermarket cashier, the nurse at the hospital -- anyone and everyone who crossed her path. An outing with her was completely unpredictable and had no boundaries of time. You never knew who my mother would end up engaging with or who she would feel compelled to connect with in the moment.

You can't be grateful and unhappy at the same time. This particular saying has moved me many times, from frustration and unhappiness, from entitlement when I would complain, "Why aren't things going my way?" -- all the things that get in the way of gratitude. She would remind me that gratitude for what is is a magic key to resolve unhappiness.

Take care of your capital. To her, capital was the value that she placed in our own lives, taking care of ourselves and our well-being; the basics, such as eating well, sleeping well, doing things that you enjoy and being discerning about the people you spend time with. It was all about how you nurture things inside and out, not getting caught up in the triviality of life or, as she used to say, toxic people. By example, she encouraged us to value the precious gift of life, always creating a sacred environment.

Eating is communion. For her, eating was a ritual. Everything was a mini-feast, whether it was tea time with digestive biscuits or a full meal, by herself or with others. It was her time to enjoy herself and bring special attention to anyone she was with.

It's an offering, not a trade. One time, someone complimented my mother on her necklace. She said, "Here, take it. It's for you." The person said, "Thank you so much, but what can I give you back?" She replied, "Darling, it's an offering, not a trade." The person was speechless. My mother used to say to me, "In a world that has learned everything is about trading, offering is how we experience the generosity of spirit."

You are here for the joy. My mother went out into the world spreading joy, the joy of giving of oneself, listening, sharing, caring and warm-heartedness. That's what the world needed most, she felt, and that's what she brought with all her being, to us, her daughters, and so many others. Today, I share with you her wisdom, her tenderness and her immense spirit that is still very present and alive. 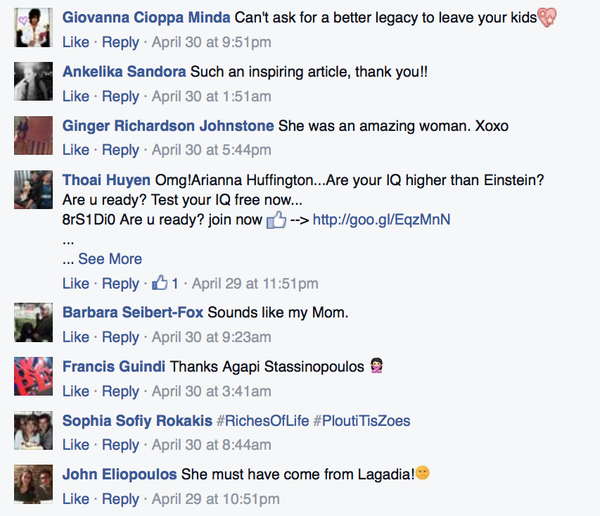 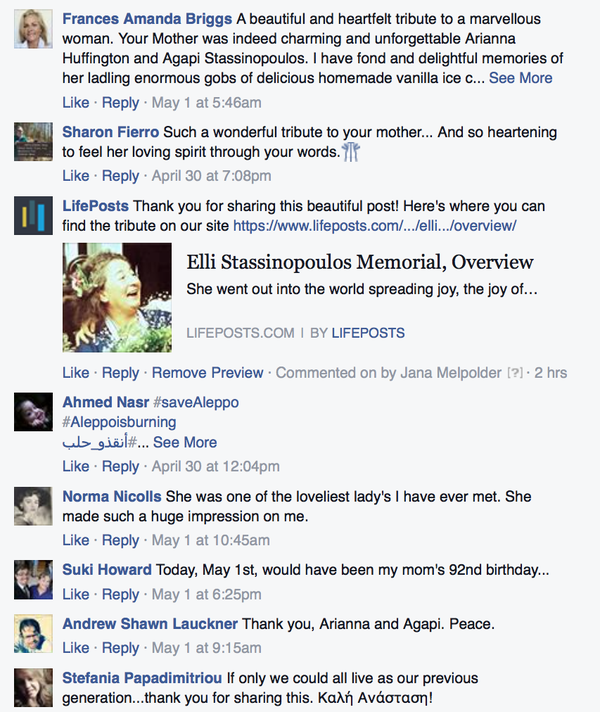