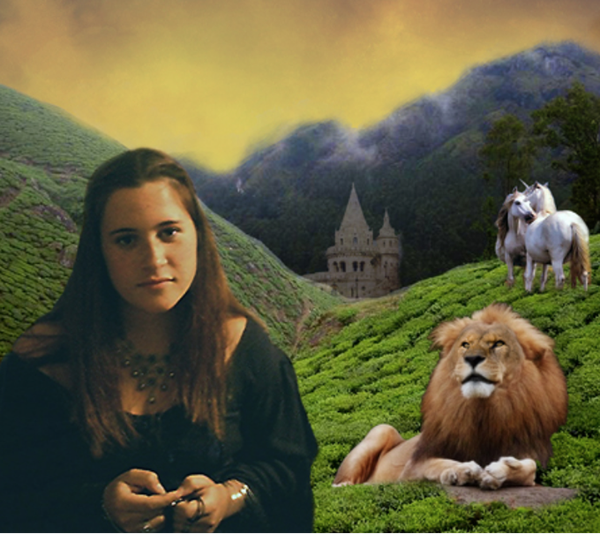 [Photomontage by memory artist, Nancy Gershman of Art For Your Sake]

Patron Saint of the Castle-Builders

By Nancy Gershman and Penny Morris

Normally, spirited 17-year-old girls don’t get dreamy-eyed about Heaven. But Adrian was dreamier by the minute with every stroke of her grandma’s hairbrush. “You think there’ll be unicorns in heaven?” she asked the night before her fatal car crash. “Because I hope so, and I think there’ll be dragons too.”

From the time Adrian was nine-years-old, she was drawing pictures of Jesus, angels, dragons and unicorns. She loved the “Chronicles of Narnia” and according to Penny, her mother, “wore the videotape out watching it.” Adrian intuitively seemed to understand that Aslan lay down his life for Narnia just as Jesus did for mankind. Only “she pictured that scene-behind-the-scene quite literally,” Penny remembers. In Adrian’s mind, Narnia wasn’t just a figment of C.S. Lewis’s imagination but that “on some plane, it actually existed.”

Her logic was that if she could conjure up Narnian creatures, then they had to have come from somewhere. “She felt imagination was a representation of things that actually exist and can be,” said Penny. And so, on the night before Adrian died, Roxanne promised her granddaughter “that because God knows how much you love dragons, he’d have them just for you.”

But, who was teaching whom that fateful evening? Was Roxanne’s promise just a lullaby, crooned to an impressionable child she didn’t have the heart to disappoint? Or was Adrian in some fashion preparing her grandma about “a new life in another world”? Truth be told, Roxanne believes it was her granddaughter’s otherworldliness -- Adrian’s ability to “see beyond” -- that had always informed her replies.

Adrian continually day-dreamed about Emerald Isle, believing she owned a castle there, and lived among the unicorns. It was not so much about where she would go in death, but where she’d always lived a parallel, interior life. From a spiritual perspective, one could easily see how considerably less painful it would be now, in the wake of her death, to visualize Adrian Elyse Morris, unaffected by time, space and the laws of gravity.

Relocating to Her Eternal Home

Adrian’s grandmother was the one who contacted me about making a “healing dreamscape” for her daughter. Roxanne wanted to know if, as a memorial portrait artist, I could depict Adrian in a heaven of her own making; a mythical landscape driven entirely by Adrian’s vivid descriptions. Not unlike Victorian society which painted personages against sumptuous trompe l’oeil backdrops, Princess Adrian would be surrounded by her spiritual wealth. Sitting in the shadow of her Irish Castle, wearing her favorite tunic dress and taking in the refined air of Narnia, Adrian’s gaze would instantly put the viewer at ease.

“The difference between regular photos and this digital photomontage,” says Penny, “is that I’m seeing her in her new life. I don’t understand all the things about heaven. But being able to visually picture Adrian as she is now, versus how we remember her, is helping me heal. Having that extra visualization as a sharing tool with people who come into my life,” Penny tells me, “is an incredible moment.”

Penny displays her healing dreamscape of Adrian near the cash register. It’s impossible to miss and also impossible not to be affected by it. “You can’t help but feel she’s here in spirit. My dancers - teachers and students alike - tell me as much,” Penny said.

Just as we have Casimir of Poland (Patron Saint of Bachelors), Edward the Confessor (Patron Saint of Difficult Marriages) and Felicity (Patron Saint of Parents Who HaveHad a Child Die), who is to say we do or don’t have a patron saint in our midst? Adrian clearly felt herself a warrior for heaven’s cause. “She was an advocate in this life and I’m sure she’s an advocate in the life she has now,” Penny tells me. “She loved life and lived it without any regrets.” And so, today, every chance she gets, Penny honors her personal saint with action.

Penny’s penned a poem about Adrian that has already been set to music. Other compositions and performances are in the works. From her daughter’s love of belly-dancing, her studio, Crystal Bindi, has grown into a creative movement studio  “nourishing the feminine spirit.”

“Her legacy shows us that even when the worst thing happens, there are two choices -- to either live or not,” says Penny. “Whatever living means, it has to mean moving forward. The thing that heals you most from the inside is sharing the tough times you’re going through.”

Several years later, Penny still finds letters at her daughter’s grave site from young people grateful for Adrian’s friendship. “She was always there for other teens going through hardships.” For young and old alike in Traverse City, Penny’s daughter has truly been reborn as Adrian, Patron Saint of the Castle-Builders.