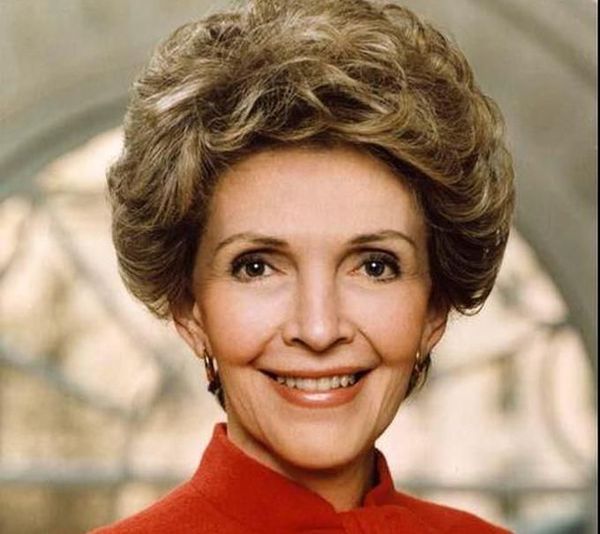 Former first lady Nancy Reagan, whose marriage to President Ronald Reagan endures as one of America's most passionate public romances, died at her Los Angeles home on Sunday, March 6, according to a family spokesperson. She was 94.

The cause of death was congestive heart failure.

"Mrs. Reagan will be buried at the Ronald Reagan Presidential Library in Simi Valley, California, next to her husband, Ronald Wilson Reagan, who died on June 5, 2004," according to family representative Joanne Drake in a written statement.

Reagan was a prominent figure in the presidency of her husband, who served from January 20, 1981 through 1989. She helped redefine the role of the first lady, serving as his fiercest advocate and defender, and a key adviser almost always seen at his side.

As first lady, she spearheaded the "Just Say No" advertising campaign that became one of the most enduring staples of the War on Drugs. As she later recalled, she was inspired to tackle the issue during a 1980 campaign visit to Daytop Village, New York.

She "was stunned to find out just how large the problem of drug abuse really is," and was "impressed by what [she] saw at Daytop Village - children who were climbing out of the mess that they had made of their lives because of their dependency on drugs."

She returned to Daytop Village after Reagan took office and formally kicked off the initiative with visits to 65 cities, 33 states, the Vatican and eight other nations over the course of the next eight years.

Reagan was born Anne Frances Robbins on July 6, 1921 in New York City, and she was commonly known to her family as Nancy. Her parents, Kenneth Seymour Robbins, a car salesman, and Edith Luckett, an actress, separated in 1928 and for several years after she was raised by relatives in Maryland.

After graduating Smith College in Massachusetts with a major in English and drama, she pursued an acting career under the name Nancy Davis while working side jobs in Chicago, then returned to New York. She was known as a capable performer with a number of credits to her name, but never became a starlet.

She met her future husband in 1949, while he was president of the Screen Actors Guild. After three years of dating, they married March 4, 1952.

When her husband left office in 1989, the Reagans retired to Bel Air, Los Angeles. Ronald Reagan was diagnosed with Alzheimer's disease in 1994. She remained at her husband's side and remained his caretaker until his death at the age of 93 in 2004.

Reagan is survived by her two children, Patti Davis and Ronald Reagan Jr.

Here's how major publications attempted to summarize her life in a phrase:

The Washington Post: a former film actress whose crowning role was that of self-appointed guardian of her husband’s interests and legacy

Fox News:  the widow of President Ronald Reagan and passionately devoted keeper of his flame

The New York Times:  the influential and stylish wife of the 40th president of the United States who unabashedly put Ronald Reagan at the center of her life but who became a political figure in her own right

Haaretz: the former actress who was fiercely protective of husband Ronald Reagan through a Hollywood career, eight years in the White House, an assassination attempt and her husband's Alzheimer's disease

SHE WILL BE BEST REMEMBERED FOR...

Her dedication to her husband

Social media users are reacting to news of the first lady's death by reflecting on her impact in public life, as well as admiration for the "great love" she gave to her husband.

Her Just Say No campaign against drugs 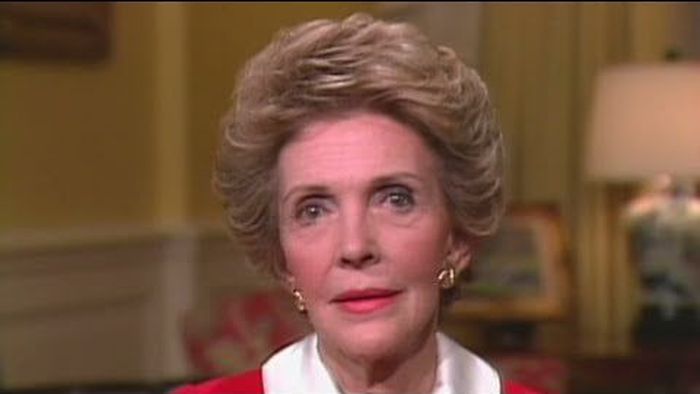 "Now you can see why drug abuse concerns every one of us-all the American family. Drugs steal away so much. They take and take, until finally every time a drug goes into a child, something else is forced out - like love and hope and trust and confidence. Drugs take away the dream from every child's heart and replace it with a nightmare, and it's time we in America stand up and replace those dreams. Each of us has to put our principles and consciences on the line, whether in social settings or in the workplace, to set forth solid standards and stick to them. There's no moral middle ground. Indifference is not an option. We want you to help us create an outspoken intolerance for drug use. For the sake of our children, I implore each of you to be unyielding and inflexible in your opposition to drugs.

"Our young people are helping us lead the way. Not long ago, in Oakland, California, I was asked by a group of children what to do if they were offered drugs, and I answered, "Just say no." Soon after that, those children in Oakland formed a Just Say No club, and now there are over 10,000 such clubs all over the country. Well, their participation and their courage in saying no needs our encouragement. We can help by using every opportunity to force the issue of not using drugs to the point of making others uncomfortable, even if it means making ourselves unpopular.

"Our job is never easy because drug criminals are ingenious. They work everyday to plot a new and better way to steal our children's lives, just as they've done by developing this new drug, crack. For every door that we close, they open a new door to death. They prosper on our unwillingness to act. So, we must be smarter and stronger and tougher than they are. It's up to us to change attitudes and just simply dry up their markets.

"And finally, to young people watching or listening, I have a very personal message for you: There's a big, wonderful world out there for you. It belongs to you. It's exciting and stimulating and rewarding. Don't cheat yourselves out of this promise. Our country needs you, but it needs you to be clear-eyed and clear-minded. I recently read one teenager's story. She's now determined to stay clean but was once strung out on several drugs. What she remembered most clearly about her recovery was that during the time she was on drugs everything appeared to her in shades of black and gray and after her treatment she was able to see colors again.

"So, to my young friends out there: Life can be great, but not when you can't see it. So, open your eyes to life: to see it in the vivid colors that God gave us as a precious gift to His children, to enjoy life to the fullest, and to make it count. Say yes to your life. And when it comes to drugs and alcohol just say no."

The Just Say No campaign had plenty of critics.

Some argue that it was the war on drugs initiated by the Reagans that led to mass incarceration and imprisonment for non-violent drug crimes.

Some in the scientific approach argued that education programs rarely worked.

Her contributions to Alzheimers awareness

Her tremendous influence on the Reagan White House

After the Reagan presidency was over, it emerged that Nancy was much more influential on policy and political matters than people knew. Owen Ullman of USA Today, who covered the Reagan White House, summarized:

While Reagan gave sharply worded speeches that embellished his conservative views on small government and his antipathy toward the Soviet Union, Nancy Reagan softened her husband's sharp edges to produce a pragmatic president who could cut deals with the political opposition in Congress and Soviet leaders he had assailed. Such bipartisan agreements that advance the public's agenda are all but non-existent in Washington today.

On domestic policy, Nancy Reagan encouraged compromises on budget policies to preserve some programs for the poor in return for cuts in other programs that did not target those most in need.

Although the president gave rhetorical support to the anti-abortion movement, Nancy restrained him from taking actions that would further restrict a woman's right to an abortion, keeping him in line with the majority sentiment in the nation.

At a time when society was largely homophobic and discrimination against gays was the rule, Nancy preached tolerance toward people of all sexual orientations. She often invited gay friends from Hollywood to the White House and even encouraged the appointment of gays — who remained in the closet — to administration jobs.

On foreign policy, Nancy prodded her husband to reach out to the Soviets to negotiate arms control treaties. He refused to engage any Soviet leaders during his first term, saying they kept dying on him. He finally did so in his second term, establishing a strong relationship with then-Soviet President Mikhail Gorbachev.

By critics, for her spending habits

Early in her husband's presidency, Nancy Reagan got a great deal of negative attention because of her spending habits. The New York Times wrote in 1981:

Just as Lady Bird Johnson was linked with highway beautification, Betty Ford with women's rights and Rosalynn Carter with mental health, Nancy Reagan has, in her first nine months in the White House, become identified with spending money...

That image has been shaped by a string of well-publicized events, ranging from Mrs. Reagan's arrival in Washington last January with a $25,000 inaugural wardrobe to her recent purchase of more than $200,000 worth of china for the White House.

In Washington and elsewhere, the First Lady's activities have sparked discussion and controversy. Democratic strategists on Capitol Hill are already planning to use Mrs. Reagan's ''Queen Nancy'' image to woo blue-collar voters in next year's elections.

Living in the spotlight as an actress and then the wife of one of the 20th Century's most notable politicians, Reagan was well-equipped as a public speaker. Whether funny, poignant, reflective or blunt, she was always charming and could speak across the political divide. Here are a few of our favorite quotes from a first lady whose passions, both public and private, encountered their fair share of challenges.

I've had quite a life, when you stop and think about it.

To my young friends out there: Life can be great, but not when you can't see it. So, open your eyes to life: to see it in the vivid colors that God gave us as a precious gift to His children, to enjoy life to the fullest, and to make it count. Say yes to your life.

Just say no to drugs!

I must say acting was good training for the political life which lay ahead for us.

When people say, 'You have Alzheimer's,' you have no idea what Alzheimer's is. You know it's not good. You know there's no light at the end of the tunnel. That's the only way you can go. But you really don't know anything about it. And you don't know what to expect.

Feminism is the ability to choose what you want to do.

The movies were custard compared to politics.

I always liked red. It's a picker-upper.

My life really began when I married my husband.

With Alzheimer's patients, you have to be very careful what you say when you're looking at them over their bed. Because once in a while, they understand it.

Everything just fell into place with Ronnie and me. We completed each other.

I have been very happy with my homes, but homes really are no more than the people who live in them.

I think a woman gets more if she acts feminine.