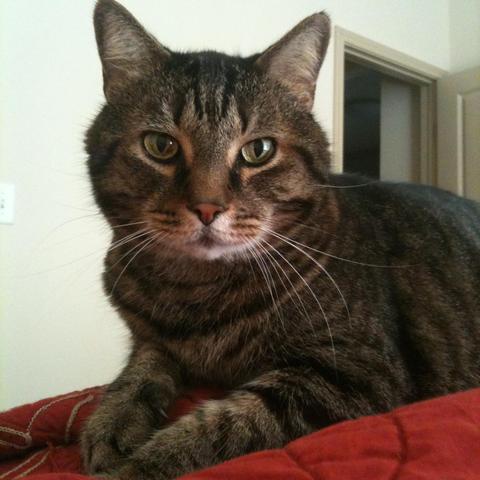 What was Harley Kenneth's best trick? Have a video?

I wish I had a video of this, but Harley would fetch milk rings and twist ties. He'd do it incessantly until I hid the things. He loved fetching!

What made Harley Kenneth happiest?

When I'd finally settle down for the night and turn on the TV before going to sleep, he'd snuggle up on my lap and purr and stretch and purr some more. I think these were definitely his happiest moments.

What did Harley Kenneth do that made you laugh?

He would get so excited over his food, that he'd knock the can out of my hand as I was trying to open it.

He'd sit near me anytime I was sitting down and growl at Lilli if she came near me. Very protective. It was hilarious.

Whenever I'd go to bed after brushing my teeth, he'd go nuts for the minty smell and just about stick his whole head in my mouth if I'd let him!

When I'd be gone for a while, he'd bring all of his toys and pile them beside the front door. A bit on the psycho side, but funny and kinda nice to come home to.

He was really just a funny cat all around. So protective, so aggravated at his sister all the time. He was so fun to torment. ;-)

What nicknames did you call Harley Kenneth?

How did you pick Harley Kenneth's name?

I'd recently lost my fiance in a plane crash, and we'd already discussed the name of our first child -- no matter if it was a boy or girl, it was going to be Harley. So, when I found this sweet baby kitten and decided he was coming home with me, I decided that would be an excellent name for him. It really fit him, too.

What do you miss most about Harley Kenneth?

The thing I miss most is how snuggly he was. He couldn't wait for me to be still for a bit so he could come and lay on me or snuggle up next to me. He just couldn't get close enough. I really loved that, and as he entered his late teen years I would tell myself to relish every moment of it because I would miss it one day...and I do.

How did Harley Kenneth become a part of your family?

I was working for an environmental clean-up company. We were working on a low income neighborhood in Dallas called Cadillac Heights. My job was to go door to door and explain to people that we were about to clean up the lead in their soil from the nearby smelter. In front of one of the houses, as we drove away, I saw 3 tiny kittens in the ditch. I asked my colleague to turn the truck around and I got a box and put them in it. I went to their door and told them I was going to take them and find them homes (did not ask as they clearly couldn't take care of them even if they wanted to). I asked if they knew where the mother was, and they didn't know. Later I would come back and get her also, so she could be spayed. But today, it was just those three tiny kittens... I held them in the box in my lap as we drove back to the office. One of them just would not stop screaming. While the others tried to snuggle up and sleep, this one just screamed and yelled. I decided he would be mine. I'm a sucker for a trouble-maker. At the office, his brother and sister were quickly adopted by very worthy colleagues of mine, one of which was my aunt. I took Harley home with me and then went and got all of the stuff a kitten needs. I was so excited as I'd just been through a major loss in my life and I just knew he was here to help me through it. Boy did he ever! And then some. It was the beginning of many, many adventures together.

What are your favorite pictures of Harley Kenneth?

What are some of your favorite videos of Harley Kenneth?

What was Harley Kenneth's favorite food?

What was Harley Kenneth's most human characteristic?