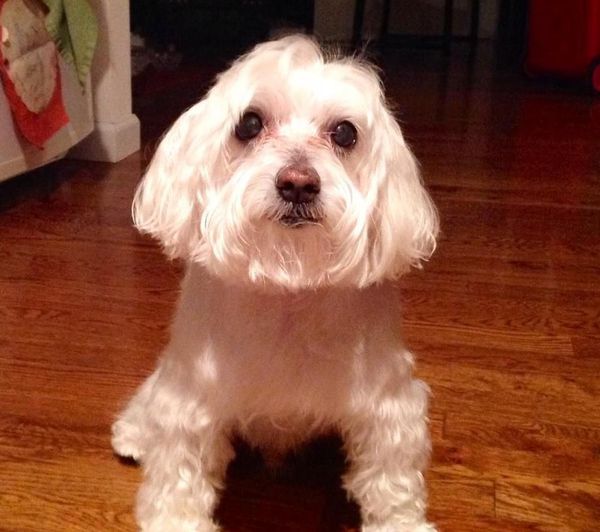 The best little dog there was

By Kathryn and Jeff Janus

When we adopted Harry from Metropolitan Maltese Rescue, he had already experienced loss. His original family could not take care of him properly because his primary caretaker, the grandmother in the family, had recently died. The first owners did the right thing, and sought out Metropolitan Maltese Rescue. He was beautifully housetrained, happy and energetic with a swagger in his walk. He was a little guy who liked to take charge of any situation, and since his papers said that he had been born in Missouri, we named him Harry after Harry Truman. He immediately bonded with our dog at the time, Isaac, but mostly with our big orange tabby cat, Ezra. Harry and Ezra did not seem to care that they were different species; they slept together and groomed each other. When Ezra died, Harry grieved like a person. He wouldn’t eat and he was lethargic.  He was a dog that felt things deeply.  We used to say that Harry wore his heart on his paw.

He instantly understood that he had a job as a co-therapist with his mom, a group, individual and couples therapist. He was alert to the comings and goings of clients and often involved himself in their treatment. He was known to jump up on the lap of someone who was weeping, or station himself between a couple who had raised their voices. He was big on greeting people, with a lot of excited barking.

When he got a diagnosis of iris atrophy, which made his eyes extraordinarily light-sensitive, we bought him doggie sunglasses (the only remedy) and he understood right away that these "doggles" were to help him on sunny days. 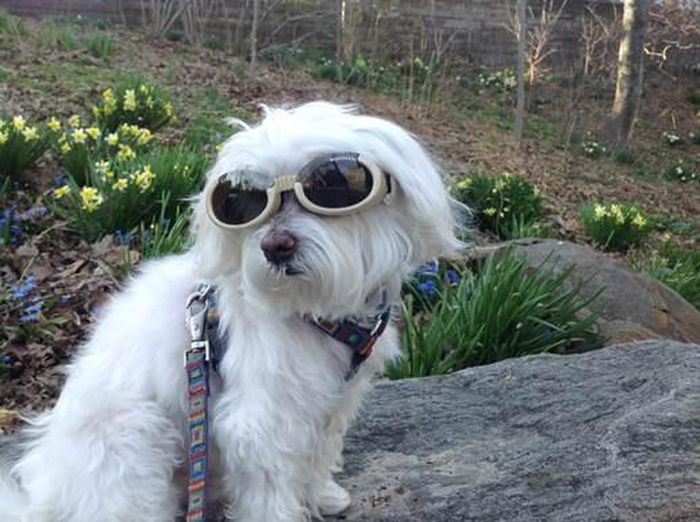 He was an instant New York celebrity with those glasses. Tourists from all over the world would ask if they could take his picture as he strolled in Central Park. Harry was usually willing to oblige his fans. Eventually, when he heard anyone say “glasses,” as in, “Look at the doggie with the glasses!” he would sit down and wait for his photo to be taken. After a while, he would go up to any group of people he came across, in the belief that they must simply be there to pet him and fuss over him. And most of the time, sooner or later they would.

After his first canine companion Isaac died, Harry got a new brother from Metropolitan Maltese Rescue, a stray from the Bronx we named Daniel. Never were two dogs more bonded than Harry and Daniel. They had a terrific and loving relationship. As Harry slowly aged, Daniel evolved from Harry’s younger brother to his canine caretaker. When Harry’s arthritis became so debilitating that he and Daniel could no longer take walks together, the first thing that Daniel would always do immediately upon his return was to check on Harry.

Harry’s main love, after Daniel, us and the clients, was food. He never met a food he didn’t like.  He was an adventurous eater, as in - jumped on a chair, jumped on the table and ate a whole order of fried sweet plantains when we weren’t looking. Harry especially enjoyed sampling the cuisine of New York street fairs and inviting himself to join sociable picnics in Central Park. It was all part of his zest for living and love of new experiences.

Harry, as has been noted, was very photogenic, and graced two Metropolitan Maltese Rescue calendar covers as well as two “months.” His now-posthumous photo will be in next year’s 365-Page-a-Day Dog Calendar—a commercial calendar that sells about five million copies. His image (with his sunglasses) lives on!

These last months have been increasingly tough for Harry—kidney disease, arthritis and a spinal issue that made mobility harder and harder. We really did not think that Harry would make it to his 15th birthday, and then that he would survive such an endless and miserable winter. But Harry passed those milestones and lived to feel the rejuvenation of springtime. Harry accepted age and infirmity with grace. He didn’t mope or whine or feel sorry for himself. He just let us know when he wanted us to put him on or take him off the bed. He still had his strolls through Central Park, albeit in a stroller. At times he could hardly walk, or even stand up, but if a squirrel dared to cross his path, or if he sensed a treat in the offing, he could still run with astonish alacrity.

As we realized that his long and full life was coming to an end, we kept hoping that he would give us a clear sign that he felt it was time for him to go, so that we could help him avoid further pain, disability and discomfort. And like the perfect dog he always was, he gave us that sign last night.

Jeff and I are so grateful to have had Harry in our lives for as long as we did. He was a marvelous and special guy and we will dearly miss him, and treasure his memory as a blessing. 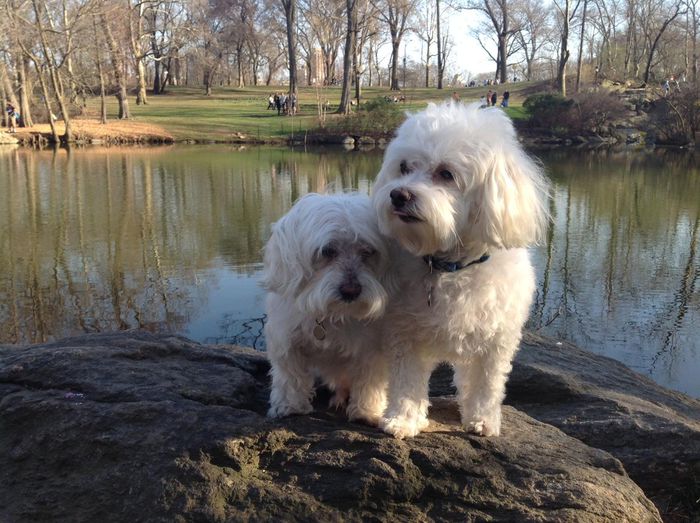 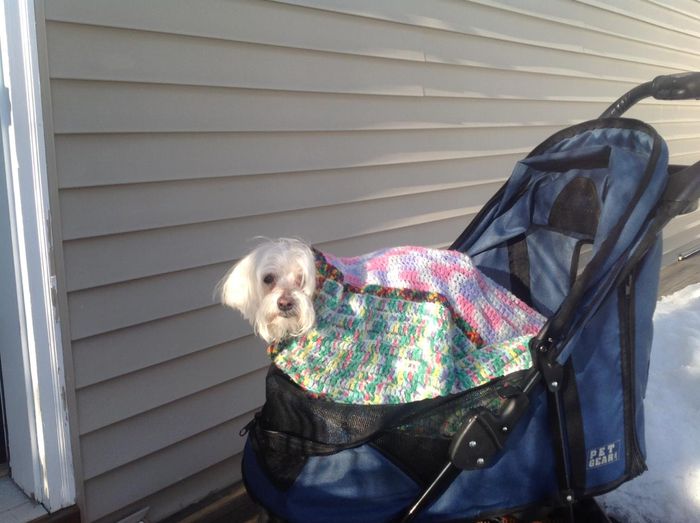 Darling Harry on a winter day, in his stroller. He got to where he preferred riding over walking. 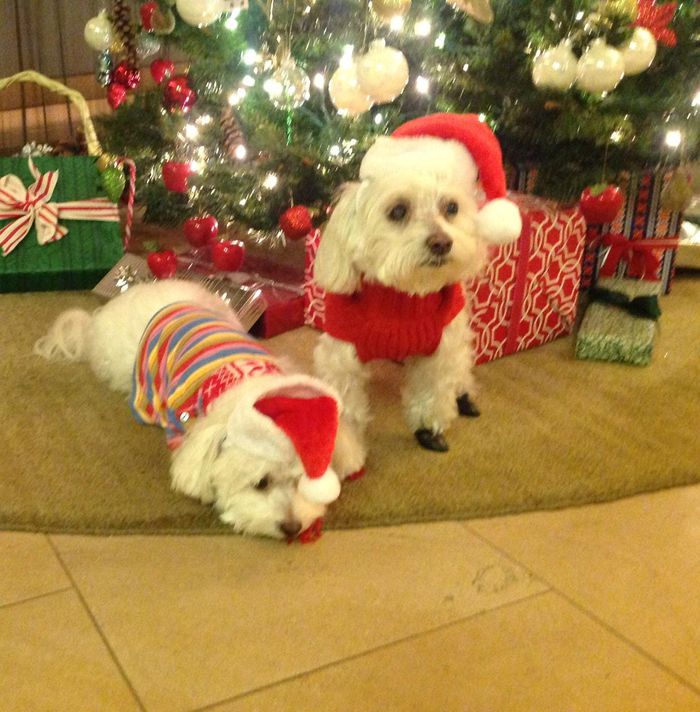 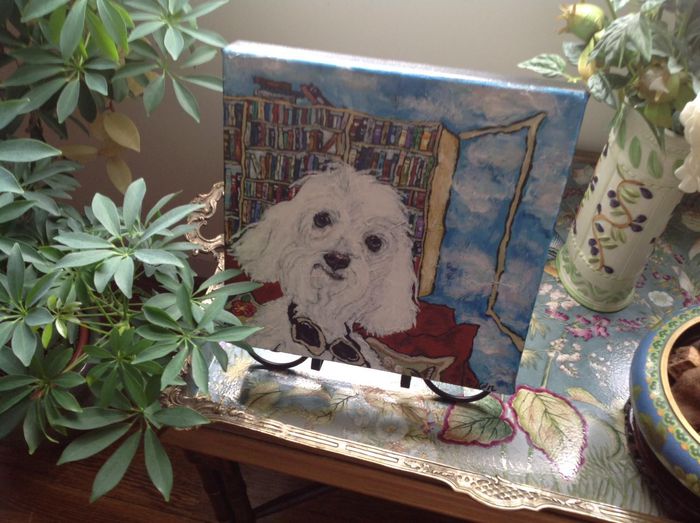 Our darling friend Barbara Riddle painted this painting of Harry after his death. She captured him perfectly and, like us, loved him so much.