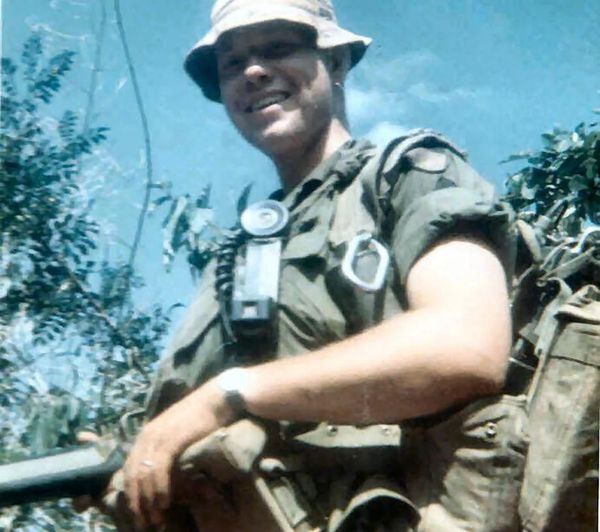 This Vietnam Vets Round Trip

My active duty military experience began January 2, 1966 when I reported to the Minneapolis Federal Building for a pre-induction physical.     I was sworn into the Army that afternoon and we were transported across the street to the depot and put on a train to Ft. Leonard Wood, Missouri for basic training.  Fortunately my fiance and her family were able to retrieve my car from the parking ramp near the Andrews Hotel and later help my Grandmother and Grandfather, Anna and Bill Dallman, gather my things from the home I was renting from them at 14209 Rockford Road in Plymouth.

After basic training I was sent to Ft. Jackson South Carolina to be trained as an infantryman with added training as a mortar gunner.  On May 5th I flew home on a three day pass and married my wife, Jan, the next day.  On the 7th we flew back to South Carolina and she joined an off post rental home full of trainee wives from my unit.

Ft. Polk was the next stop where I had training and was promoted to PFC as a finance clerk.  Jan and I lived off post at a trailer park in a 35 foot sweat box.  Times were good and we lived well on about $150 a month.

In November I was ordered to report to Travis AFB on January 2, 1967 for transport to the 1st Cav in An Khe Republic of Vietnam. After the month of December 1966 on leave at a small basement apartment on Kent Street in St. Paul, near her family, I reported to Travis.

We flew on a C141 Starlifter from Travis to Cam Rahn Bay, South Vietnam and processed in country.  After a short flight to Pleiku then on to An Khe, I processed through the replacement detachment and was assigned to Delta Company 1st Bn (Abn) 8th Cav, the "Jumping Mustangs", an Airborne unit - risky stuff for a leg finance clerk.

Upon reporting to the 1st Sgt John A "Pappy" Loughran out in the rice paddies during a search and destroy mission, he told me he didn't need a ____'n clerk but I could learn the radio.  I was Sgt. Jenkins RTO for five months.  The company clerk rolled the company jeep in base camp one day and I swapped the radio for a desk in platoon headquarters at An Khe.  Three months later there was need for a finance clerk in the 15th Admin Company and I was transferred to become personal assistant for Maj. Curtis Lee.  Later I was promoted to SP5 and moved to the replacement detachment with duties to process GIs in and out of the Division.  I went full circle.

On December 19th, 1967 I processed out of the 1st Cav, flew to Cam Ranh Bay and boarded a Pan Am commercial flight to Ft. Lewis Washington.  On the morning of December 21 I caught a cab to the Seattle Tacoma Airport and flew back home.  That afternoon I knocked on the door of an apartment Jan had rented at 1855 West Larpenter in Falcon Heights, MN.

That was the beginning of the rest of my life.  Military service provided me with the springboard to a very good life.  College at the U of M, family and friends.  The Army was my life at a time when I was establishing my value system and beliefs that would carry me throughout my life.  For that I am grateful.  In combat, we covered each others backs and left no man behind.  Stateside we took care of our own.  We had the courage to stand up for beliefs at a time when the armed forces and their mission were unpopular.

In 1968 the Vet Center on University Avenue at Hwy 280 provided counseling for my wife and I as we struggled with my "chronic anxiety."  Today it's called PTSD.  I went to the Vet Center for a few years.  Today I volunteer at the Vet Center.  One of the missions of today's Vet Centers is to welcome veterans returning from combat and provide resources to aid in daily life.

Cover each others backs - leave no man or woman behind - stand up for beliefs.  The Vet Center provides me with the opportunity to be useful.