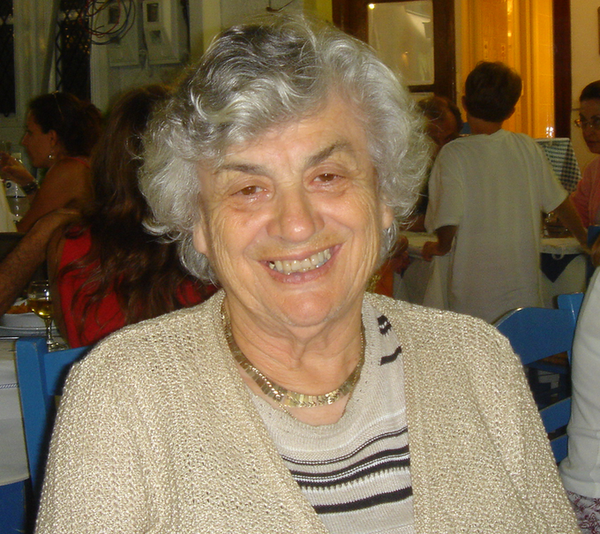 Vasiliki “Vaso” Kounalakis (née Rozakis) danced through life. The melodic and sometimes wild music of her native Crete was a driving force for how she lived: with fierce grace, beauty, rhythm, joy.

A native of Greece, she rejected an arranged marriage and, instead, took a then-radical route by choosing her own husband and love, Antonios - they met at her Chania City Hall workplace. After WWII and the Civil War, the newlyweds arrived in the United States with refugee status thanks to the World Council of Churches. San Francisco became home.

Vaso was a loving and devoted wife. Finding a photo of her without Antoni at her side is rare. Professionally, she started her career by working the midnight shift at Bank of America’s Day and Night branch at Powell and Market. She stayed with the bank in various roles at both Redwood City and Palo Alto branches until retirement.

First in her family to finish high school, Vaso valued education and insisted her own kids go both to college and graduate school. America made that possible, she made it necessary.

Possessing a cutting wit and a wicked sense of humor, she was tough, but reverent. Vaso was a progressive amidst a conservative Cretan tradition and community and was always attuned to the Zeitgeist.

Vaso’s deep Greek-Orthodox faith in love drove her good works and her respect for nature. She enjoyed wandering and watering her yard, always stopping to smell her garden’s roses, jasmine, and anise. When she rubbed her hands with fresh rosemary and basil, those hands always smelled sweet.

Classy and well put-together, she was impeccable in dress and inscrutable in attitude. Vaso’s compassion knew no bounds and only subtle refrigerator-taped photos gave away her consistent support for various impoverished children around the world, all of them living in hard conditions or war zones. Next to pictures of her grandchildren were the photos of these other kids - boys and girls Vaso would never meet - reminding her of the responsibility to share what we can and do what we must.

Passion for children everywhere also meant a deep love for her grandchildren at home - she tried to be with the grandkids daily. Vaso was strong, independent, clear, critical, and reflected “girl power” well before that became a popular term - these values and lessons are not lost on her family. One regular reward was watching her grandchildren grow into responsible people who speak a bit of Greek.  She loved seeing them at church. Lessons taught, lessons learned.

Alzheimer’s caused her to slip, but as long as she stood, she never lost her dance step.

Vaso is survived by her husband, Antonios; her younger siblings Chrisoula Doukakis and Demetrios Rozakis; her son and daughter, Markos Kounalakis and Diane Kounalakis-Baxter and their spouses Eleni Tsakopoulos Kounalakis and Jeff Baxter. She was a constant presence and early caregiver and teacher for her four grandchildren, Tony and Victoria Baxter, Neo and Eon Kounalakis.

She danced with them all.

The music has now stopped.

May her memory be eternal.

In lieu of flowers, please donate to the PanCretan Association of America, Alzheimer’s Association, a local Greek Orthodox church, or any child in need.

May her memory be eternal and may the love she gave to so many people surround her in heaven together with all her beloved ones up there. Rest in peace, auntie.

So sorry for Vaso's passing. She is now painless and at peace.