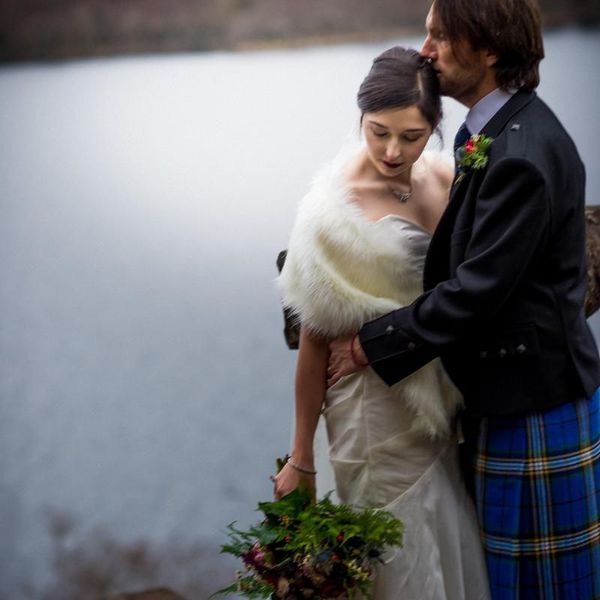 When James proposed on New Year's Eve last year, I knew there was only one place we could get married: The Middle of Nowhere, Scotland. We discovered the church we were married in on our first trip to the highlands as a couple. James used to live and study in Scotland and he wanted to show me some of his favourite places. What he didn't take into consideration was that the roads in that area are very small and twisty, and that I have issues with car sickness. So after a while, I made him pull over because I thought I was going to be sick, and he serendipitously pulled into the car park of St. Conan's Kirk, a mock-gothic church on the side of a loch that he'd somehow never noticed before and which we realised - after I got over feeling nauseous - was incredibly beautiful.

We had only been together for a little over a year, but I admittedly bookmarked it in my head as my dream wedding location. It's hard to explain how drawn we both felt to it, and it was especially difficult to convince my family from the States that it'd be worth travelling out to the Scottish sticks for, but it was so worth it. Everything about our wedding day was perfectly suited to us, and we count ourselves incredibly lucky to have so many family and friends who were willing to come along for the ride! It was a truly amazing weekend.

And, although we got married in a Christian ceremony in a church (James' parents and my mother are Church of England), we're planning a Jewish blessing in NYC in August in order to celebrate the Jewish family and traditions with which I grew up. We see it as an opportunity to perfectly blend our cultures and families as a married couple.