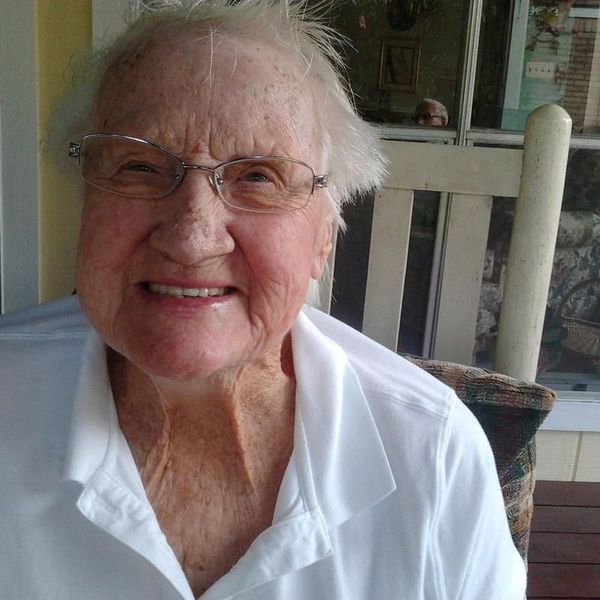 Born in Perth, Western Australia to Alice Carney (nee Turner) and John Thomas Carney. She was the 4th of her siblings to pass in this life:  Dennis (Uncle Denny), Olive, (Aunty Ol), Beryl (Aunty Pearlie), and now Mum. She is survived by her brother Uncle Billy and youngest sister, Aunty Vida, who still live in Perth surrounded by a loving family. She has a vast number of nieces and nephews that span the Australian continent from the west coast to east. God love them all! Her roots ran deep and were never broken.

Shirley was taught by nuns at a Catholic School in Perth before she went to work to help their large family survive hardships. She met a cocky American sailor, Earl P. Hild, at the Greasy Spoon fish and chip restaurant on Hay Street and fell madly in love. They were married on September 12, 1944, at a time when the war in the Pacific was still ongoing. They were married for almost 73 years. That is a lifetime.

In October, 1945, just following the end of the war, their first child, Phillip, was born in Australia. He was almost brand spanking new when Shirley and Phil boarded a converted troop ship, traveled across the Pacific Ocean for 31 days, and landed in San Francisco, California. From there, they boarded a train headed to Chicago and on to their destination in Baltimore, Maryland.  Earl got to see his six-month-old son for the first time when they arrived at that train station. The war did that, it separated lives and was a different time. Their daughter, Sandra (Sandy) was born in May of 1953.

When Sandy was born, her parents were renting an apartment on Gwyn Oak Avenue, just down from Gwyn Oak Amusement Park. From there they moved to the Little House across the alley from Mil and Allen Mayers, who became their best friends for life. That was in 1955. Over the years, they all joked that they would pass Sandy around the table in her onesie with the speckled feet.

Around this time, Shirley started working, hiring herself out to care for newborns and their mothers when they returned home from the hospital. She would take Sandy with her and one of her first jobs was the big old house on Frederick Road, right next to where they eventually built the Catonsville Library. She was in her element.  Shirley became the one who gave all the babies in the family their first baths.

We moved to the house on Hilltop Road when Phil was 14 and Sandy was 6 in 1959.  That was the first home they ever owned. Back then, it was tough getting the bank to give you a loan.  I think that house cost around $15,000. To help Earl pay for it, Shirley got a job with the State of Maryland at Spring Grove Hospital, a mental health facility in their neighborhood.

In the beginning, she fed patients on the ward but moved up the ladder to the main kitchen.
Eventually, she became a supervisor in the diet kitchen. It was her idea to start adding spices to the food to make them better tasting for the patients, the first time this had ever been implemented.

She hardly ever missed a day at work, even when a blizzard hit and you couldn't drive. She would put her on her boots, heavy coat, and tied a scarf around her head to walk to work, trudging through knee deep snow or higher. She retired from Spring Grove and continued to live on Hilltop for a while after that. From this point forward, she focused on caring for family and friends.

Boy, did Shirley love to sing and her voice was lovely. When she worked around the house, she would sing. Of course, she liked all the songs from WWII. Instead of turning a radio on, she would burst into song while washing dishes, doing laundry, running the vacuum. Her life was a musical.

You knew Shirley was mad when she was really into cleaning. She flew through her work. It was her way of working off that bad energy.

Mil, Allen, Mum and Dad loved to go to dances and mother was the designated driver before that became popular.  She never did like to drink.  I remember her liking a Sloe Gin Fiz once in a blue moon.  The drink had to be sweet, really sweet.

One time, we heard hysterical laughter as their car came up the alley down at Mil's.  Mil had won a gigantic bear in a raffle and that darn thing had its head popping out of the sun roof for the whole ride home. They were laughing so hard they were crying. We talked about that for years.

Always a saver, Mum put dimes away and opened a special bank account to help pay for our summer vacations in Ocean City, Maryland.  We started when I was 13 and they kept it up well after my mother retired. Mil and Allen and my parents rented the Sea Splash, across from the Sandy Hill Motel (I kid you not). Later, they rented a four-story townhouse on the beach.  They shared so many memories with their best friends until Mr. Al died in 1996 and Miss Millie followed in 1999.

My parents became grandparents early in their lives. Wendie was born in 1968 when Mum was just 40. Two years later, Janet came into this world and Allen followed in 1975. We still lived on Hilltop Road in Catonsville during that time and she was working full-time at Spring Grove. My mother cherished and loved all of her grandkids, great grandchildren, and great grandchildren.  She was happiest when a child or baby was around and her face would just light up as soon one approached her. They breathed new life into her existence.

Her children and grandchildren received the best of care and her home was spotless. Shirley had a dedicated worth ethic and always found the energy to push on.  She drew from this as she fought the illness that eventually took her life.  They called it Alzheimer's Disease.

Shirley had a mild stroke in 1996 and she never completely recovered. She knew what she wanted to say but struggled to say the words.  Therefore, she became frustrated frequently.  She seemed to grow more inwardly and would be on the fringe of family gatherings and such.

One of her dreams came true after they moved from Hilltop and bought their second home in Sykesville. For more than 14 years, Earl and Shirley got to live with their granddaughter, Janet, her husband, Mark, and their two daughters, Rebecca and Delaney.  Dad turned the basement into an apartment with a living room, bathroom, kitchen and bedroom. Upstairs, he constructed a big addition with a family room, office, and second bath. They thought they would live out their lives there but life never happens quite the way we plan it.  That is okay.  They adapted quite well but they missed their "girls".

It was in July 2011 when they moved from Maryland to Houston, Texas. They were 86 and 83 years old. A testament to just how strong they are. Moving is hard enough when you are young. Phil, Kathy, Janet and Mark took over the move of all of their stuff and that was a big help. In Houston, they had to find a place to live.

Sandy had been looking and was walking the dog around the neighborhood when she passed a home with the garage door open.  She looked in and saw a porch and nice yard and thought, wouldn't it be nice if that was available. Well, within about a week it went on the market. Earl and Shirley saw it before there was even a for sale sign out front.  They put a contract down on it and there was someone right behind them.  They got the house.  It is a little bit of Heaven for them. When they first walked through the gate into that yard, they looked at each other and said, "We could live here". They did very happily for more than six years.

Shirley struggled for about four years but the last two have been the hardest. She passed away in her own home on Wind Willow Drive in Houston, Texas, around 11:30 pm on September 2nd but wasn't pronounced by the hospice nurse until 12:11 am on Sunday.  She was cared for by her beloved husband, Earl, and daughter, Sandy, along with all of the supportive caregivers from Silverado Hospice.  Special thanks to Teri, her kind-hearted nurse who continues to be a support to her family as they grieve her loss.

"Lila" Eleanor Searle, Shirley's sister-in-law died in Baltimore 42 hours prior to her.  Earl and Sandy believe these two are "hanging" out together in Heaven along with Mil and Allen Mayers, Nana, Aunty Pearl, Aunty Ol, and all of those who passed before them. May they rest in peace.

And I heard a voice from heaven saying, “Write this: Blessed are the dead who die in the Lord from now on.” “Blessed indeed,” says the Spirit, “that they may rest from their labors, for their deeds follow them!”