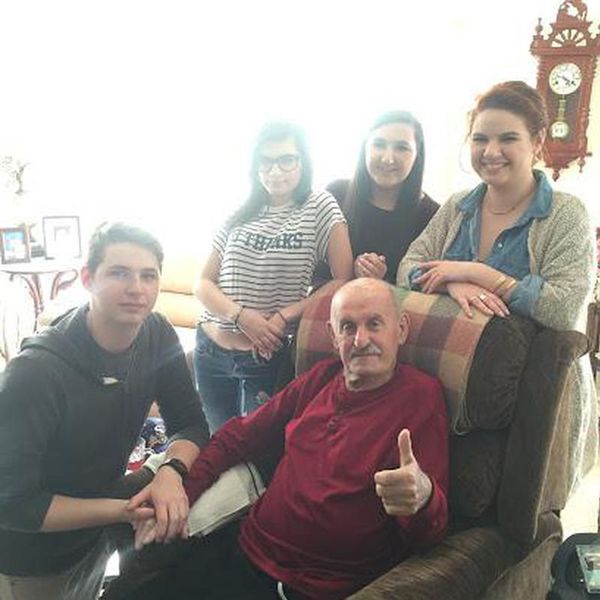 Steve Katkics was born in Budapest, Hungary -- the second child of Maria Toth (a homemaker) and Istvan Katkics (a master upholsterer).

His oldest sister Maria (a.k.a. Csopi) was 15 months when Steve was born, and Steve was 13 years-old when his youngest sister Erzsebet (Elizabeth) was born.

Anyone who knew my Dad would not be surprised to learn he was a prankster, often times getting into trouble in school for cracking jokes, talking excessively or reading comic books in class -- the pages of Captain America hidden deep within his text books.

Growing up, my Dad also loved to read science fiction novels, especially titles by H.G. Wells -- allowing his mind to escape to fantastical worlds, where time and space travel offered his restless heart respite from the near poverty and hunger experienced by working class families, especially during wartime in Hungary.

As a teenager, my Dad fell in love with the theater, and often times spoke about the exact moment he learned about American cowboys riding through towns without borders or the need to carry papers (i.e. visas or passports), imagining what it felt like to experience that kind of freedom.

Dad moved onto vocational school and studied to be a mechanical engineer, but in his heart he wanted to be a railroad engineer -- to work on a steam engine (like his grandfather) was his dream job.

The Hungarian Revolution of 1956 would change the course of his life, forever -- my Dad was 19 years-old when he and two of his best friends made a pact to leave Hungary and travel to America, where they could ride their bikes for thousands of miles, without borders or papers.

My Dad left Hungary in November of 1956 -- he told my Grandmother that he was going out to buy a loaf of bread, not knowing that it would be the last time he would see his Mother -- leaving my Grandmother behind is something my Dad has regretted his entire life, until his last breath.

Dad and his friends traveled at night, avoiding capture by enemy soldiers, and sleeping in haystacks during the day -- on one particular day, they heard gunfire not far from their hiding place. They each held their breath, as the machine gun bullets cut through haystack after haystack, until the soldiers were standing right in front of them, when they were called back from their assault on the field.

My Dad lost his shoes during their escape, and became very ill, but his friends would not leave him behind and carried Dad over the border into Austria.

Dad arrived into Newark, NJ and traveled to Camp Kilmer, where Hungarian refugees were housed, and foster families volunteered to take them in, until work and school arrangements could be made -- my Dad and his friends moved in with a Hungarian family in Woodbridge, NJ.

My Dad worked many jobs over the years, sending a large portion of his pay to his family back in Hungary. He even saved up enough money to buy and send home a television set for his Mother -- my Dad's greatest gift was his natural ability to do things to make other people happy.

In 1963, my Dad became restless and looking to settle down. He was introduced to a Hungarian girl by a mutual friend of the family, and took her to see a movie. Eva had dark hair and dark eyes, and was very shy -- he stretched his arms and placed one around her shoulders. Eva smiled, and gently took my Dad's arm from off of her shoulders -- my Dad was hooked.

My parents were married in a civil ceremony on August 17, 1963 and honeymooned in Bushkill Falls, PA. My parents moved to an apartment in Perth Amboy, NJ. My twin brother and I were born the following May -- my parents invited my Grandfather to visit with them here in America on a 6 month visa (my Grandmother wasn't well enough to travel, and was taking care of my Aunt Elizabeth who was 13 at the time) and Papa was thrilled to be able to hold his Grandchildren, just a couple of weeks shy of needing to return to Hungary.

My Father's Mother passed away in January of 1965 -- it's a comfort to me and my family to believe that my Dad is now with her, sharing hugs and kisses over a fresh loaf of a crusty bread.

We moved in with my maternal Grandmother when I was a toddler and for many years my parents worked two (sometimes three) jobs in order to save up enough money to buy their own house.

When my brother and I were thirteen, we moved down the street from my Grandmother's house and my parents spent the next 30 years re-building their house from the ground up -- they were especially proud of the backyard, which was hailed by family and friends as an urban oasis.

My Dad's passion was landscaping -- he could take a mound of dirt, a few drops of water, and endless amounts of patience, to create the most beautiful gardens imaginable.

After battling many health issues, my maternal Grandmother moved in with my parents in 1999, and lived out the rest of her days in peace and comfort, surrounded by her family and Great-grandchildren.

My kids grew up playing hide-and-go-seek in their Grandparent's greenhouse, learned to swim in the small above-ground pool nestled among dozens of shade trees, and had countless number of sleepovers at Mama's and Papa's house.

My Dad LOVED being a Grandfather -- on his days off from work, he would drive down to my house and help with taking care of the children, or weed our terribly neglected vegetable garden, and he never complained about spending his day off driving "down the shore" in Summer traffic, or consoling his frazzled daughter, by taking care of the children while I stole a quick hour (or two) for a nap.

After the death of my Grandmother in 2003, my parents sold their house and moved to Manchester, NJ in 2004 -- they always loved the beach and now living near the ocean, with Europe just on the other side, always made my Dad feel like he was that much closer to home.

He loved to have people over the house and hosted thousands of barbecues, but Christmastime was Dad's favorite and he would often times volunteer for the holiday shifts at the hospital -- he also believed Christmas to be one of the loneliest and worst time for some folks -- because making people laugh and forget about their worries (even for a little while) is what my Dad did best.

After having fought his entire life (and battling a very critical inner voice) to prove himself worthy of everyone’s love and respect, I am proud to reaffirm Apu was more than enough -- he was the heart and soul of my family...leading by example, his legacy will live on in our hearts and in the millions of stories he’s shared with his grandchildren.

Rest now Daddy, know that we all love you, and we miss you, terribly... and YES, you wrote a REAL good story.

It is a lovely story.SO MUCH LIKE US. YOU OUR A LOVELY FAMILY TO LOVE YOU FAMILY SO MUCH.GOD BLESS YOU ALL. JuliaEngel

Rest In Peace Mr Katkics. A true American with a life full of Love, Family an Serice.