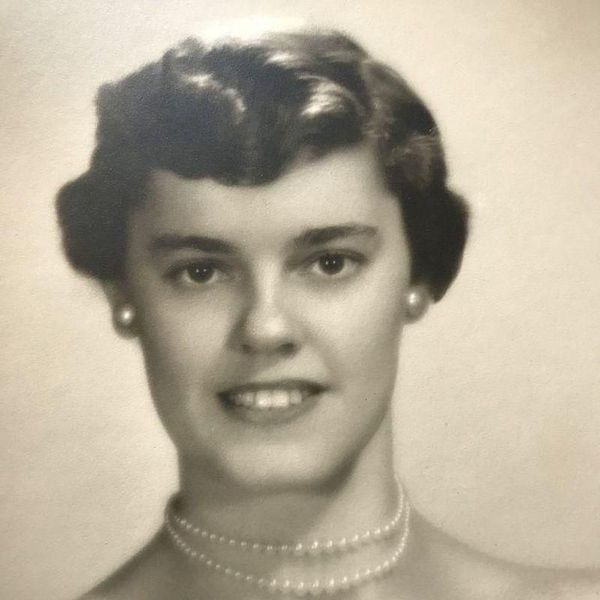 Joeline Marie Stearns passed peacefully to our Lord surrounded by her children and grandchildren on April 4th,2018. She was 90 years young. Joeline was born in Wilkes Barre PA where she attended Wilkes Barre Business College. As a child she tap danced and sang on the radio. She met her beloved husband at an evening of dancing at the Spinning Wheel before the Korean conflict. Donald and she were married before he went off to war. She enjoyed 64 years of marriage and raised 7 children, including her beloved daughter Denise’s son Lindsay. She had 11 grandchildren and 2 great grandchildren. Joeline’s greatest joy was being surrounded by her family. She was known for her entertaining and was fondly called “Mamaleoni” by many that knew her. She loved to host wonderful house parties. With so many children and grandchildren her home was always full and very busy. On occasion she would pour salt on the kitchen floor and tap dance and sing. Her voice was of Broadway quality and she would often turn heads while singing. Joeline loved to shop with her daughters and to go on day trips to Chester or New Hope . The annual trip to New York City for Christmas was a favorite of hers, first stopping at The Plaza, then lunching at Tavern on the Green , a horse and buggy ride around Central Park, and viewing the Christmas Tree at Rockefeller Center. She will be sorely missed by all that had the pleasure of knowing her. May she rest in peace after a job well done here on earth! Predeceased by her mother and father Elsie & Joseph Kane, husband Donald P. Stearns Sr, twin brother Joseph Kane, sister Elizabeth Eastman, daughter Denise Stearns, Grandson Paul Nickoloff. Survived by children Dawn Stearns, Donald P. Stearns, Jr., Dale & Mary Stearns, Diane & Jim Kontra, Dee and Geoffrey Angelo and grandchildren Lindsay Stearns, Devin & Kelsey Nickoloff, Gennifer & Bobby Abraham, Robert & Brian Stearns, John, Andrew & Jake Kontra and Elizabeth and William Angelo as well as two great grandchildren, Xavier & Ethan Abraham. A Funeral Mass will be held on Monday, April 9, 2018 at 10:30am at St. James the Apostle Church, 45 S. Springfield Ave., Springfield. Interment will follow at Fairview Cemetery, Westfield. There will be a visitation on Sunday from 2-6pm at the Bradley, Smith & Smith Funeral Home, 415 Morris Ave., Springfield. Contributions in memory of Joeline may be made to the Salvation Army.