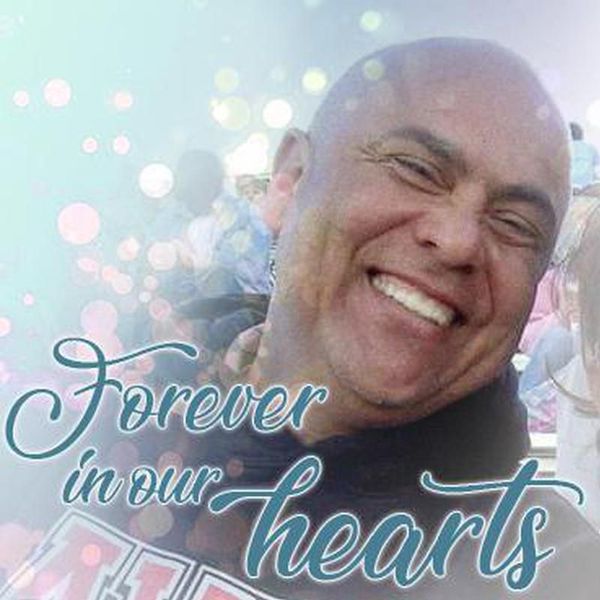 How do we say goodbye?

How do you say goodbye to someone whose personality is so alive in our memories that it hurts to let him go?  Steve Mitchel Conner-Jeffries bid his farewell to this world on March 30, 2018, in the presence of his loving children. Family meant everything to him.

Those that know Steve wouldn't believe he didn't speak a complete sentence until his mom told him: "Little boys who can’t speak, can’t go to school."  Well, that must have been his trigger.  He has never stopped talking since.  He grew up telling his funny stories, always had a joke, and I know that his friends have a lot of stories to tell. Each one would be different and yet so similar.  We have heard many of them over the past few weeks.   We will miss his many e-mailed jokes, his six-figure job postings that nobody ever qualified for, and his annual letter to personnel & the union about job equity.  Yes, those will be missed.

He loved to argue his point, fight for the underdog, and make people face reality.  We think he missed his calling; Can you see his legal mind at work?  When he was younger he thought he could sing, NOT!  We told him to shut up so many times it makes us wonder if he should have been a songwriter instead.  Or maybe, a matchmaker:  This is the advice he gave to all his nephews.  “When you see a group of ladies sitting at a table across the room, ask the waitress to send them a round of water and tell them it's on you. Trust me you will get some numbers.” Then he would snicker in a way only Steve could do.  (but you know he had done this at least once.)

He spent his life being a Father to three wonderful kids, now adults;  Claudius, Toya, and Jerrod.  He later added his late wife Anna’s children to the mix.  He had so much love to give.  Maybe that is why he chose to work for the Apple Valley School District. Steve loved people and found family in Mariana Academy staff.  He worked with teachers to keep classrooms environmentally healthy and conducive to learning.   He loved keeping students safe, teaching life lessons, and making others smile.  Nothing pleased him more than surprising someone with something that would make their day.  But he was just as pleased to say “NO that is not happening” when he didn’t intend to do something.   His  Navy dd214  said he had a great sense of humor and they were right. He did and he shared that fun-loving spirit with all of us.  He cared and he cared deeply.  His caring shows in the lifetime friends that he has maintained relationships with. Many friends and family have called to check on him and we wish we could have shared some good news with all of you earlier.

But here is the good news.

Our Father God loves Steve, and Steve loved you,
freely with no judgment, just pure love.

Share that Love by paying it forward for Steve.

R.I.H my loving Uncle Steven. You will truly be missed and that smile that you always had no matter the situation you would always lighten up the room

Missing you everyday my work brother

Uncle Steve I can’t brli you’re gone I’m gonna miss you your jokes your smile that Lil snicker laugh you had after a joke and those great games of dominos over the years I can honestly say that I’ve learned from the best!! To bad I never was able to get that “W” tho lol 😂😂 but while you chilling in heaven get your practice on with my hubby Lando and I will see u one day in the heavens and I can get my chance to finally get that “W”... By the the way I got your one and only baby girl she’s never got feel alone I love her too my lil cuzzin and when her and Randy ain’t doing thier thing I’m gonna be all in her bizness lol 😂.. Man I miss you think about you everyday you are truly loved💔💔💔💔🌹🌹😢😢