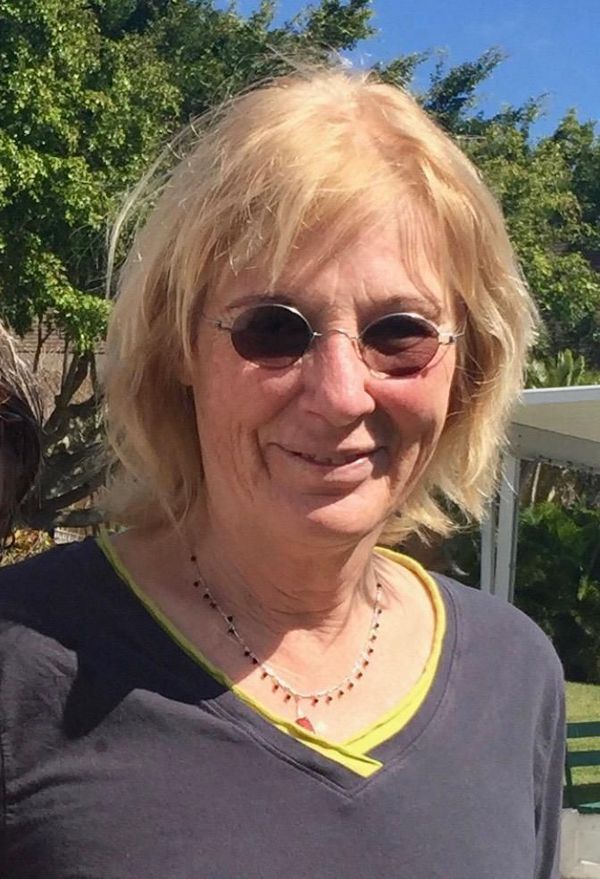 By BY Bruce McNally

Beloved champion, protectress, advocate, resident critic and scholar, fierce, funny, dedicated, determined and chock full of life, liberty and yes, that pursuit too.  Gerri made the Dalai Lama mad once (not at her, thank Buddha), our investigative Gerri Jones, innovator Supreme, seeker of truth, justice and the Native American Way.

What do John Cleese, Jane Goodall, Oliver Sachs, William McDonough, Mae Jemison, Toni Morrison and Andy Goldsworthy have in common (besides international acclaim and awards?) - Gerri Jones, as director of Cornell’s Professors-at-Large program, brought every one of them onboard and came away from each visit with thoughtful gifts from those transient profs, even becoming an assistant to Goldsworthy with his installation on the roof of the Metropolitan Museum of Art, amongst other projects.

When Gerri retired a few years ago, both Dr. Sachs and John Cleese (look for Ger’s name on John’s upcoming book) refused to continue with the program unless Gerri agreed to return for both their tenures, which she gladly did.  House mother to Namgyal Monastery (“Gerri La” the monks called her) where she tucked herself away in the attic apartment of the lovely Cascadilla Street Victorian she helped the monks buy, teaching them to drive on the monastery’s old maroon Volvo (while gleefully convincing them the chromium “DL” plaque on the butt of the car denoted His Holiness’ initials rather than “De Luxe”), spending years establishing the Tibetan Resettlement Project, filling out applications, becoming godmother to toddlers she’d go on to assist with college applications.

Dinosaur founder Gerri Jones, responding to Ronald Reagan’s blockade of Nicaragua by instituting “Tools and Toys,” installing brightly painted boxes around town, collecting so much stuff Oxfam International agreed to run the blockade and deliver it all, only we didn’t have the money to get it to Boston Harbor.  So Ger concocted a benefit, introduced by mayor John Gutenberger (who - with Ger’s help - convinced the town council to adopt Nicaragua’s Monimbo as sister city), starring the Ithaca Ballet, the Burns Sisters and Buffalo University’s School of Ethnomusicology’s “Ritmo Buffalo” band who, upon departure, left one boy’s heart behind with Gerri, along with the text of The Native Peoples of the America’s presentation to the United Nations, which would become Dinosaur’s cause celebre for the next decade, establishing us a second home in that grandest dames of old American cities New Orleans, eventually getting us nearly tarred and feathered and run out of an Atlanta national theater conference on a rail - if those things hadn’t gone out of style - which Ger always had in abundance.  “Fallout Fashion’s” chicest creator (who can forget I Ran Jogging wear, the No Fission logo Ger designed (a bomb with a red X through it), Acid Rainwear, Survival of the Fattest, Last Resort Wear or the top-of-the-line, Ho La Cost!), one of her hand-painted outfits is in F.I.T.’s permanent collection, another at the Met, our own Diane Keaton, years before Diane showed up on the scene, fastidious curator and collector, you only had to check out Ger’s wardrobe or scrutinize the tiny, beautiful installations around her gracious home to recognize one of the many spirits behind those blazing green eyes.

Generous to a fault, I’d come to indict her, translucent beauty who went from natural jet black hair in high school (Central Islip’s own Cher, Gerri was in the ‘advanced class,’ first to be sent home for wearing a minidress) to the blonde many of you have come to know, who tracked down Hopi elder Thomas Banyaca way out in the Four Corners for an interview on a journey that would have Gerri (and us) come to know and adore Onondaga Firekeeper Chief Oren Lyons, the original presenter of the UN message that the world has yet to heed. I’ll have to call Oren next about Gerri, arrested for “entertaining passengers” on the A train in the 1980’s at 125th St, Uri Bronfenbrenner’s executive assistant all those years at Cornell, loving and dutiful daughter, loving and beloved sister, ferociously loyal friend (who I’ve never been an adult without), sweet mother to her sweet dog Amala and lately to puppy Ama and always best of friends to all of my dogs.

“Do you want to meet Courtney?” Ger asked me one day on the phone, a week after Kurt Cobain had killed himself.  I drove over to the monastery, sat there with Ger until a frizzy wrath exited the bathroom and, head down, stamped over to me, thrusting the drippy mop into my face.  “Is my hair green?” the apparition demanded.  I inspected.  “Kinda,” I answered and “Shit!” she replied, stamping away, slamming the door and setting Ger and I free to go off thrift shopping.  “Do you want to meet His Holiness?”  she’d asked another time.  (Believe it or not, there was a period when people didn’t know much about the Dalai Lama - like before Richard Gere) “Sure,” I’d answered and drove up from Brooklyn.  It’s a long story, but that time He’d come to inadvertently hold my hand (while chatting sweetly to some old friend) for a minute or more and that hand of mine was HOT to the touch for 24 hours – ask any of the dozens of people I made feel it.

Thank you, Priceless Ger, flying Cobain’s ashes out to Courtney’s mansion, cremains by then formed into the stupas the monks had slaved over for weeks, one of which Ger had been using as an office doorstop.  Was she kidding?  Did she know how much those ashes were worth on e-bay alone?  Incomparable, from high school to eighteen-years-old at Woodstock and right up til now.

Last time I saw her at the hospital she was considering the word “Remission,” as in the goal the doctor had her heading for.  “Re-Mission,” Gerri mused.  “What do you think my next mission should be?”  I had one answer then but another one came last night, and I swear to Gawd it’s from Gerri because it was exactly her kind of brilliant thing, not mine.  But I’ll do my best Ger, who came to me through dreams sometime around the time she “passed” - looking up from her hospital bed, eyes shining, her face BEAMING joy so powerfully it woke me up thinking “She’s cured!”  Of all this, she is - Forever and ever a light in the darkness, Born to Run, she met Bruce too one thrilling Asbury Park afternoon, rolled down the window and let the wind blow back her hair.  She never grew old and she never will.

In 1982 Gerri was house sitting the sacred land I've long been blessed to inhabit. When I arrived home she was by the pond, excited by her inspiration: "We have to get His Holiness the Dalai Lama to come to Ithaca." Gerri coordinated Cornell's Scholars at Large Program , so was able to accomplish this in 1991. She left a Grocho Marx-style mustache in his bathroom. His Holiness emerged laughing, wearing the fake mustache.

Thanks to Gerri, many Tibetans were able to move to Ithaca. I sometimes brought my young son to my Cornell office in Martha Van (where Gerri also worked), weekends. The watchman politely intercepted young Galen kicking around a soccer ball in the deserted playground outside my office. "Is his yours? He's very good at soccer." So was the watchman, a former monk now devoted to helping his fellow Tibetans. While I wrote, he used his dinner break to play soccer with my son.

Gerri brought her dog Amala (Tibetan for "mother" ) to her Cornell office, curled up as a stream of colleagues and friends visited throughout the day, drawn by Gerri's creative magnetism. I was blessed to know you Gerri. We all were. Fly on, dear Gerri. In memory of you, I'm re- missioning my life while I'm still blessed with health. Thanks Bruce for that inspiring term. Claire Forest

Gerri lovingly gavejus two tix to see Mr.Cleese at Cornell and we had seats near the front row. As I listened to his talk, I looked back stage, and there she was, Gerri standing completely ALONE staring through the break in the curtain. There she was, the lead role in an angelic solo act going on back stage, and no one could see it, but for the glimpse I saw. Gerri stood perfectly still, not pacing, or fidgeting, as Mr. Cleese spoke. I saw a glint in her eye, and a message without words came from her presence. We now know, again without too many words, we now know what message she sent. LOVE. We will most certainly miss her.

So many of us have so many small, modest, but meaningful connections to Gerri. One of my favorite memories is of her go-Karting with the monks...

Beautiful, thank you Bruce. I always wanted Gerri to write her life story down. It would be amazing. I am forever changed by lovely Gerri, she will always be with us.

So sorry to hear this. She was truly an energizing person. Great smile.