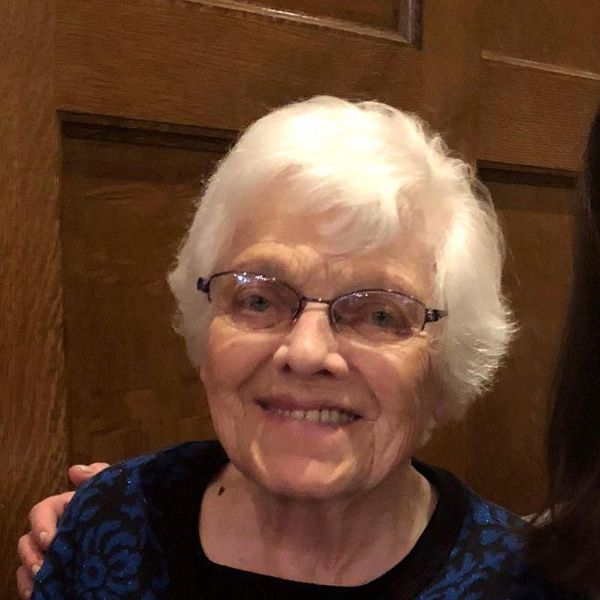 Catherine A. White died peacefully on May 23, 2019, in her 95th year. During a long, full life, she touched every person she encountered with her warm heart and vibrant spirit.

Born in Newark, New Jersey, on September 27, 1924, she was the youngest daughter and seventh of nine children of Daniel McIntyre and Mary Ellen (Carr) McIntyre, who emigrated in 1910 from County Donegal, Ireland, to the United States. “Dolly,” as Cathy was known within her family, grew up in a lively urban immigrant community against the backdrop of the Great Depression and the Second World War. Her father drove a trolley in Newark; her mother was the matriarch of a clan rich in warmth and humor, if not material wealth. Dolly was bright and spunky, an avid reader and gifted Irish step dancer, performing from a young age with a troupe in Newark. She danced the Irish jig at family gatherings past her 90th birthday.

While working as a clerk after the war at the Fire Insurance Rating Bureau in Newark, Cathy met and, in 1950, married Andrew White, a young Army veteran from Linden. Soon, in a classic mid-20th century journey, they moved their growing family to the newly developed suburb of Whippany. Andy commuted to work in Manhattan while Cathy embraced homemaking and neighborhood life. Together they were well-loved anchors of their community, extended family, and local church, Our Lady of Mercy, as well as celebrated song-and-dance partners in parish variety shows.

In the 1960s, Cathy became an aide in the reading clinic at the local elementary school, Salem Drive. She grew to be a respected member of the teaching team and for nearly 20 years found great personal and professional fulfillment in helping children learn to read.

Cathy and Andy moved to Summit in 1995 and spent winters for twelve years in Naples, Florida, where again they made many friends—Cathy singing in a choral group, Andy playing his accordion in a band, and both volunteering at local charities, all while hosting a steady stream of friends and family. Grandchildren were always especially welcome, in Florida or New Jersey. Open arms, delicious baking, songs, sewing projects and chats with Grandma, along with Grandpa’s tall tales, tinkering and outings, were sources of endless delight and treasured memories.

Cathy remained an involved, beloved mother, grandmother, sister and aunt after Andy’s death in 2007. She moved to Fellowship Village in Basking Ridge in 2014. She will be deeply missed by her children and their spouses, Laura and Paul Dillon (Brooklyn, NY), Maryellen and Tom Grady (Littleton, MA), Dennis White and Ellen Boylan (Summit, NJ), and Ronnie and Reed Chisholm (Boston, MA), and by her twelve grandchildren and great-grandson. She is also mourned by two brothers and their wives—Daniel and Mary McIntyre (Short Hills, NJ) and Michael and Carol McIntyre (Manasquan, NJ)—as well as many nieces and nephews.

A funeral service will take place on Tuesday, June 4, at 9:30 am at St. Teresa of Avila Church in Summit, NJ. Donations in Cathy’s name, in lieu of flowers, may be made to any of the following: Cornelia Connelly Center, 220 East 4th Street, NY, NY 10009; Friends of Great Swamp National Wildlife Refuge, 32 Pleasant Plains Road, Basking Ridge, NJ 07920; or First Friends of New Jersey and New York, 53 South Hackensack Ave, Kearny, NJ 07032.