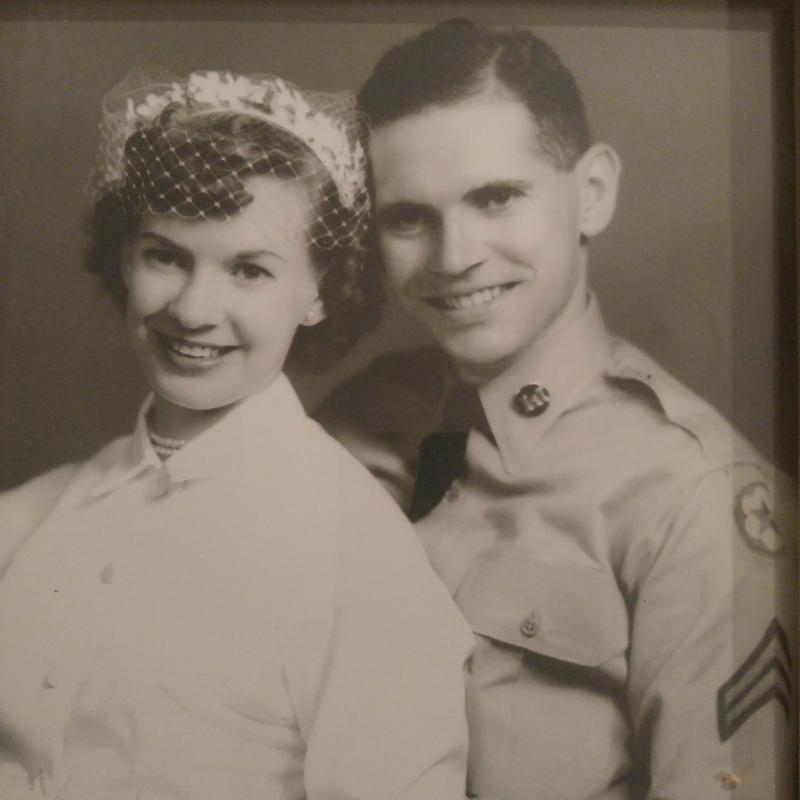 What will you miss most about Stanley?

Watching his reaction when one of us would piss him off. Priceless!

Ted Haartz here on Lee's line: Oops, the previous posting attributed to Lee, my wife, was actually my remembrance of the close relationship I had with Stan, his mother and father, and Jeanne and Paul. Sorry about the confusion I may have caused.

I miss Stan as he was the closest person to being a brother to me during the first 20 years of our lives. I lived in the city of Somerville, MA abutting Medford where Stan resided. We were in DeMolay together during our late junior high school and high school years and attended Tufts College at the same time, along with his sister Jeanne.

As for Stan's tradition of desserts on the breakfast table, that harks back to our grandparents and aunts in Nova Scotia from where both our mothers emigrated. A half-dozen types of cookies was a common offering on that table. Ted Haartz (1st cousin)

Do you have a favorite story about Stanley?

I just remember our yearly vacation up to Cape Cod. The brutal 47 hour drive from NJ... ok ok 6 hours, but it seemed so much longer! Mom and Dad, 5 kids, and 2 English Springer Spaniels in a sexy station wagon. Of course, Pete and I were stuck in the very back, with the gassy dogs. Good times. You know how rowdy 5 kids can get . Every year we would hear the same line, “if you don’t knock it off I’m going to turn this car around “! Yeah right, we knew you already paid for the trip. Bahahaha

Dad told us a story from his days in high school when World War 2 was happening. His dad worked in a dairy and ice cream plant. Everything was rationed and sugary treats were especially hard to get.

Then one time, the ice cream plant got some extra chocolate, but it wasn't enough to make a full run. So, the plant manager let a few workers have these enormous 5 pound blocks of chocolate. My grampy was one of the lucky workers who got to bring one home.

Well, that block of chocolate helped make my dad, his sister and his brother really popular for a few days! 😄

Years and years ago, Grandpa and Grandma treated me to a show at Papermill Playhouse -- it was about an opera singer, and we were SO excited to see it and hear some amazing music. Turns out, we didn't really get the premise of the show all that right. It WAS about an opera singer, but what it WASN'T was a musical... or good. During intermission, I pretended I was having a great time (I was actually shriveling up on the inside I was so bored) and Grandpa and Grandma gave each other this look before asking me what I thought of the show. If you know me well, you know I have the worst poker face on the planet and I can't lie for anything, so I basically said I was suffering. I was so scared they'd be mad or disappointed, but I'll always remember Grandpa bursting out laughing and saying, "Yes, it's very disappointing. Let's get lunch." -- which from Grandpa roughly translates to "This is total garbage, let's bounce." The three of us dipped during the intermission and went to lunch, where me and Grandpa both ordered the best salmon ever. I'll always remember that.

And to add on to Holly's story from Allaire, what is totally hilarious now but definitely WASN'T funny then, was that after begging and begging Grandpa to get us those hot dogs... I absolutely hated mine 😂😭. After all that whining and begging and groveling and waiting in line, Grandpa had to put up with that curveball. I've always been a special kind of pain in the neck. We talked about that story just before father's day and he was cracking up with us.

What did Stanley dislike?

Dad hated typos and bad grammar in his newspaper.

And God help you if you started every sentence with, "Like..."

I don't think he disliked anything

What were Stanley's guilty pleasures?

Pete, I sent him that hat years ago. Yes, he told me he was an old Boston Braves fan too, but I couldn’t resist him wearing a Red Sox hat in front of his Yankee fan son, named Pete.

He never said a word.

I don't know about guilty pleasure, but it was certainly a secret one.....

All through our lives, dad watched sports and claimed he just wanted to see a competitive game. He never wore any team gear or even admitted cheering for any club......until the Red Sox finally won the World Series!!

The very next day after their Series clinching victory, my non-partisan father pulls out a brand spanking new Boston Red Sox hat.....Where did that come from?! There is no way he could have bought one that morning.

He casually remarked that he'd had it for awhile, but never in my life did I see that hat until after their Series win.

I brought it up a few days ago and he still swore he was actually a Boston Braves fan growing up. I don't know about the Boston Braves, but I'll tell you, you can take the boy out of Boston, but you can't take the Boston out of the boy.....even after almost 70 years of living in NJ.

I remember when my parents, my sister Lauron and I would come to visit during the summer. We would all have breakfast in the dining room. Grandpa would usually make some eggs or have some cereal with grandma. Whilst we would have a feast of delicious orchards apple cider donuts, crumb cake, and any other delicious desserts my dad thought we could have for breakfast. We would offer grandpa some and he’d tell us he’d pass and that he was okay. “Ohh no no I’m fine, thank you though.” Fast forward some time and eventually grandpa would come around and sneak a donut onto his plate. I always got a kick when he’d grab one and enjoyed himself.

What were Stanley's favorite TV shows, movies, books or music?

As Holly mentioned, the crossword puzzles, books, magazines, and the New York Times puzzles. He would spend all Sunday doing the Times puzzle, in between falling asleep . He also liked watching different sports. He never rooted for particular team, but just wanted to see a good game!

Dad loved Tom Clancy and John LeCarre. And he loved biographies and anything to do with history.

Grandpa loved crossword puzzles, I don’t know if they would classify as books, but it always baffled and impressed me that his vocabulary was so extensive. He would have swept the floor with me in a game of Scrabble.

What made Stanley laugh?

He would laugh his... off watching the character “Fish” on the old tv show ‘Barney Miller’. Fish had these facial expressions that were hilarious, and he had issues where he would have to go to the restroom quite often. I guess it reminded him of himself and Grandpa Thompson.

His great granddaughter, Brooklyn, could always make him smile.

What did Stanley love?

His wife, more than anything or anyone

Grandpa loved his big red chair in the den. Without a doubt everytime we would go over, we would open the door to see him either napping in his chair or watching something on the tv. More often than not he was napping.

What's your favorite picture of Stanley?

Gosh, but Grandpa loved playing up Halloween with the kids. This is one of my absolute favorite photos of Dad! 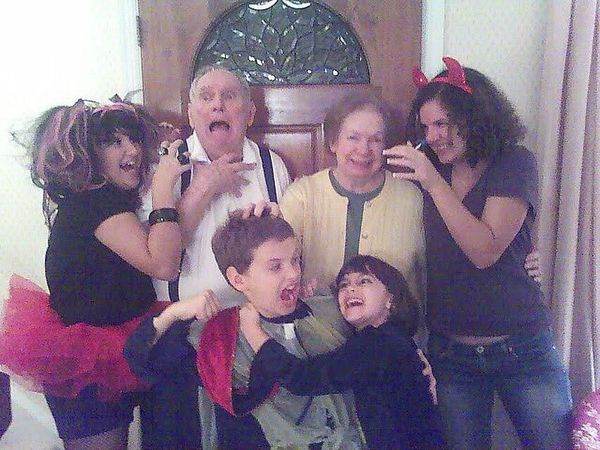 This is one of my favorite photos of Grandpa. He and Grandma look so happy and I always thought they looked like a couple straight out of a 1950’s Romantic Comedy. 💕 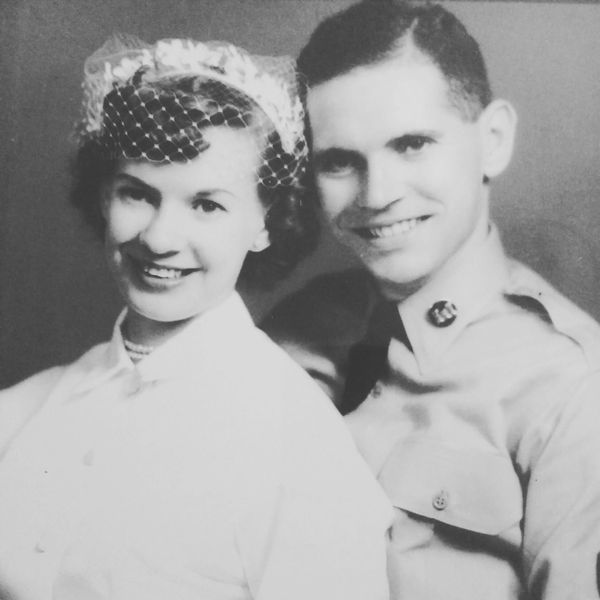 What crises has Stanley faced?

There’s been several, but the one I will mention is from his working years. During his career, he always had a pension to look forward to, at the time of retirement. Unfortunately, he was informed that the pension would be replaced by a 401k , just a few short years from retiring. The company was going to move his pension money into the 401k and it would be his responsibility to manage his money. Dad was a pretty sharp man, and decided to invest aggressively, and it paid off quite well for him and Mom. They have enjoyed a comfortable retirement for many years, thanks to his overcoming a huge obstacle!