How has Aaron changed over the years you've known each other?

Aaron and I met 18 years ago in 2002 when we were both asked to be part of a special theatrical project called Tomorrow's Promise. Our team was charged with selecting six talented high school-age New Jersey playwrights and -- working with a group that included four professional adult actors and a director -- guide the student writers in developing six short plays about the aftermath of 9/11.

Aaron was the project coordinator and I served as playwright mentor. Neither of us really knew what the hell we were doing. Aaron had some training in how to be a coordinator, but I'm sure he had never done anything like this before with teenagers. I had written several plays, but knew nothing about how to instruct others in how to do it -- especially teenagers.

Still, Aaron and I bonded in our ignorance and very quickly figured out that we shared similar values and priorities. We understood each other and worked together well to forge a way ahead on the project. It wasn't an easy process and there were rough patches with some members of the team, but I always felt I had Aaron's back and I know he had mine.

The resulting plays were a big hit with audiences, and at the end of the process I knew I had a new friend for life in Aaron Vieira.

We stayed in regular touch over the years and made a point of meeting up two or three times a year to catch up and compare notes on life -- and this is where I can begin to answer the question finally - How Has Aaron Changed?

Being a generation older than Aaron, I was married with young children and about to be 50 years old myself when we first met; Aaron was single and just into his 30s. He was in the midst of getting the education he would need to pursue his new career in public service. And he was doing well at that.

But I always sensed that something fundamental to his overall happiness was missing. There was a sadness at the core of him. It did not in any way impede his ability to succeed in his studies or career, or to be a good and amiable friend. He was still the same smart, kind, witty, and engaging guy I'd always known.

When we got together, however, the conversation would inevitably turn at some point to his disappointment at not having yet met his partner in life. He had meaningful work, loving parents, and good friends, but he did not have what I believe he wanted most: someone to share fully in his life.

One day that changed in what felt like an instant.

As soon as I saw him I could tell something was different. There was a new kind of bright light in his eyes and a spring in his step.

He told me he'd met the most incredible, smart, beautiful woman. Her name was Renya, and they had met at one of those singles events where you move from person to person and speak with each one under a strict time limit. Aaron wasn't even on Renya's dance card; he wasn't scheduled to sit down with her. But as soon as he saw her, he knew he had to meet her. He just sort of pushed his way in and took the seat opposite her as soon as it was empty.

(I may be mis-remembering this -- or making it up in my head -- I'm a writer, after all. But I think this is what he told me. And it sure sounds like something Aaron would do.)

Aaron was a different person after he met Renya. He was still the same wonderful human being he'd always been. But now he was complete. The sadness I had always felt in him was gone. Aaron and Renya are so great together, so supportive of and loving to each other -- and such great parents to their beautiful children, Annika and Gavin.

Watching Aaron become the loving husband and father I always knew he could be has been one of the most enjoyable and gratifying experiences of my life.

Happy birthday, Aaron. I love you and I am so glad we're friends.

What have been some of your happiest moments together?

Before middle age and parenthood burried us under a mountain of responsiblity and laundry, we took some wonderful trips together! I look forward to the years ahead when our bodies may be heavier but our souls lighter -- here's to all our future adventures! 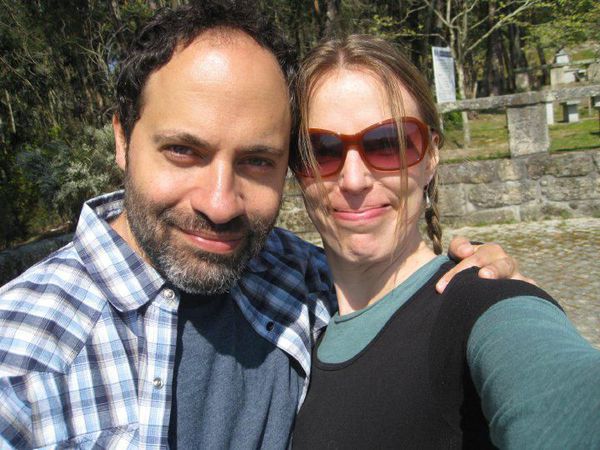 If you could offer a toast now, what would you say?

What's your favorite story about Aaron?

What have you learned from Aaron?

What does Aaron love?

What places have been most important to Aaron?

What have been Aaron's fork-in-the-road moments or decisions?

What are some of the kindest things Aaron has done?