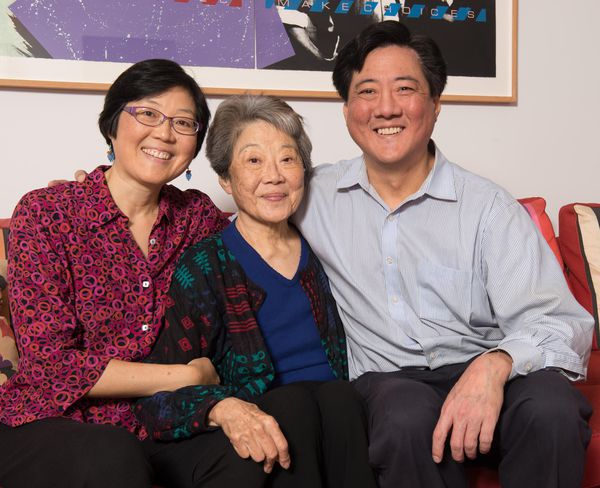 Fay Hoh Yin died peacefully at her daughter's home in Brooklyn on July 20th. For six years after being diagnosed with lymphoma, she had lived to the fullest with the love and support of daughter Monona, son Duncan, son-in-law Steve Fahrer, granddaughter Maya Yin Fahrer, and companion David Hamilton of Newark, Delaware. Her superb medical team at Memorial Sloan Kettering Cancer Center, led by Dr. David Straus, brought her back from near death in late 2015. In addition, she is survived by granddaughter Allison Fay Morley Yin and former daughter-in-law Amanda Yin of Traverse City, Michigan.

Fay was born in Beijing in 1932 and grew up during the Japanese invasion of China, her family moving repeatedly to stay ahead of advancing armies. The worst of it was three years of heavy bombing in Chongqing, during which her father was wounded in an air raid.

Fay's parents were pioneering teachers of physical education who provided a loving childhood despite the chaos of war. Her mother Dorothy Kao retired as Vice President of Chinese Culture University in Taiwan and her father Gunsun Hoh was President of the National Olympic Committee, leading the Chinese delegations to the 1936 Olympic Games in Berlin and the 1948 Games in London.

After 17 years of strife, the family fled to Taiwan during the civil war between the Chinese Communists and Nationalists. Fay attended National Taiwan University as an English student, then continued her studies in the United States as both her parents had done.

After graduation, the couple moved to Wilmington, Delaware, with their young son in 1960, where Ted went on to became a successful developer of new polymers for the DuPont Company. Ted’s mother Florence joined the family in 1963 after Monona was born so Fay could work outside the home. She subsequently spent 26 years at DuPont as a research virologist, primarily of rhinoviruses but also HIV, before taking early retirement in 1991.

Fay, Ted, Florence, Duncan and Monona were a happy family until January 1970, when Ted died in an accident in Taiwan at age 39. The family had planned to live there for six months to be near Fay's parents. After losing Ted, Fay and Florence — both widowed at a young age — bravely returned with the children to Wilmington, where they forged a unique domestic partnership for the next thirty-seven years.

Fay took up international folk dancing in 1971 at the Arden Guild Hall and often said that dancing saved her life. She went on to dance with gusto until after her 80th birthday. Her favorite genres were high energy with quick footwork such as Balkan and Scandinavian. She also loved Scottish and English country dancing and ballroom.

At the age of 85, Fay began an unlikely third act as a writer, speaker and advocate. Beginning in her 60s, she had taken writing classes at the Academy of Lifelong Learning,  producing many vivid pieces about her childhood in China. After surviving a "dress rehearsal" for her death, she and Monona edited and self-published a collection of her memoirs as Riding with the Wind: Three Generations of My Family in China.

Over the next three years Fay delighted in sharing her story, including the benefits of planning for end-of-life, with Chinese and Asian American, women’s, immigrant and refugee, and general audiences. Most recently, she had become a passionate advocate for medical-aid-in-dying laws, which give dying people the option to end their suffering. The practice is legal in nine states, but not New York or Delaware. Sadly, at the time of her death, Fay was slated to testify remotely before New York State lawmakers.

In both life and death, Fay Yin showed us how to face the unknown and walk forward with purpose, courage and joy.

She leaves behind myriad friends from many strands of her rich life. Above all, Fay was a devoted mother and grandmother and delighted in nothing more than spending time with her family. In the introduction to her book, she wrote:

It only became obvious to me after I finished writing that each generation passed on their love to the next in the best way they knew how. This love fortified their children in their own times of hardship and became the strength behind their survival.

We were blessed to receive the legacy of Fay’s “love tradition” and will carry her in our hearts forever.

An online celebration of Fay’s life was held on Sunday, August 16. Watch the recording here:

Fay requested that donations in her memory be made to Compassion & Choices, the national advocacy group for medical-aid-in-dying. If you read and enjoyed her memoirs, please leave a brief online review at amazon.com.

Click on "Life Timeline" above to see important events in Fay's life. Special Bonus: click on "Overview" above and scroll to the bottom for links to see videos of Fay dancing!

Our great thanks to photographers Loris Guzzetta, Thomas Fichter, and Karl Leck and all the organizers of the events that are linked above. 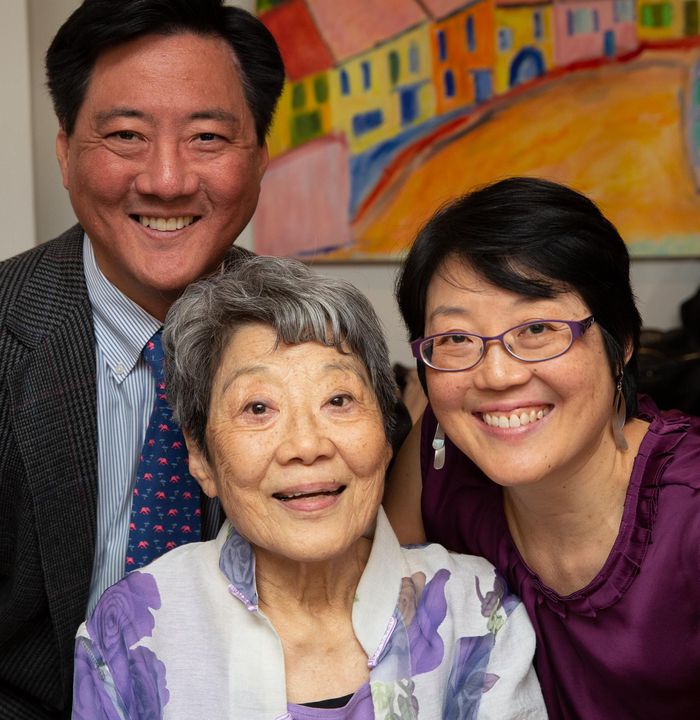 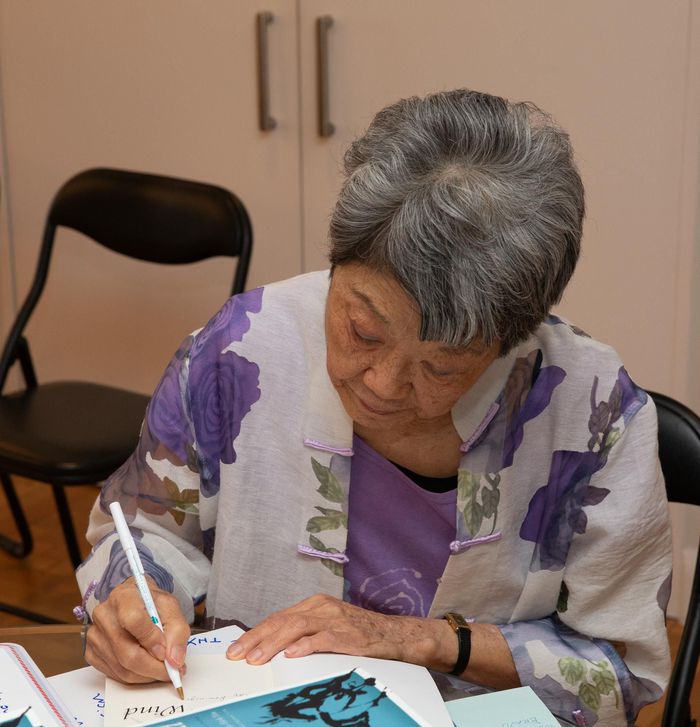 In the past few years, it has been an inspiration to learn about Fay, her strength, resilience, and incredibly full life through my friendship with Monona.I now see how she produced such an extraordinary daughter. My sincerest sympathy to the family and all of Fay's closest friends.

My dear Monona, I am looking forward to celebrating your mom Fay's extraordinary life today and feel fortunate to have met her in person.

In mid-July, I felt a tug inside of me to pick up her book, which you and she gave me at the Soh Daiko reunion at your home last summer. I opened it and immediately became enthralled. The story of your family came alive on the pages and took over my senses as my own reality faded in the background.

Though once an avid reader, I haven't finished a book in years--but this one pulled me in completely. I couldn't wait to finish it and tell you and Fay how much I enjoyed it and how it reignited my love of reading. For an English Lit major, who once always had a book on her bedstand, this was big.

Sadly, as I was cresting the final chapters, you sent a note that she had passed. I was crushed to learn that this amazing woman had left to soar among the angels and disappointed in myself for not having read her memoir sooner so I could tell her how much her story touched me.

What a legacy she has left. I see her strength, her kindness, her beauty, and her compassion in you. Through your social media posts and our conversations, I have enjoyed witnessing your incredibly special mother-daughter bond.

I weep for your loss and rejoice in what you had for so long. I love you my friend and hope you feel the enormous hug I am giving you right now. 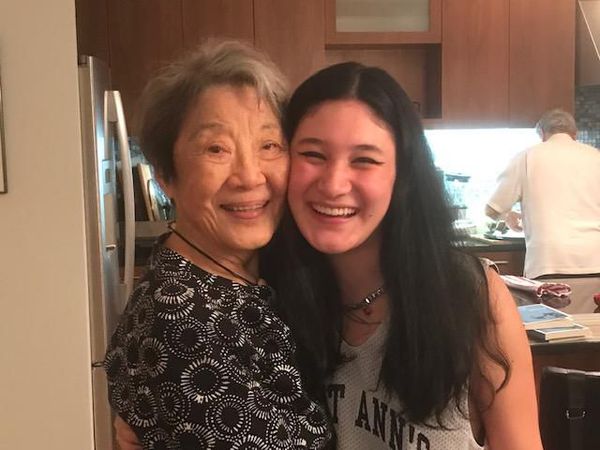 I love this, Kathy. And thank you so much for that priceless photo! Hugs & kisses from afar!

Although I only met Fay a few times, I knew from the start that she was warm, generous, smart and accomplished, as well as having a wonderfully close mother-daughter relationship with Monona. Monona brought us together. Fay and I also shared our familiar experiences of dance, something we both loved. I am so glad she and Monona spent quality time throughout their lives and especially the last few years. With Monona's encouragement and help, Fay wrote and published a book about her life -- "Riding with the Wind: Three Generations of My Family in China." The book is an engrossing, well written and an easy read. I read it several times and became so much more appreciative of the depth of Fay's life! I have encouraged my family, relatives and friends to read it. I will miss Fay and even with only the few times we met, I have many fond memories. My condolences to Monona, Steve, Maya and other family members.

One of my favorite remembrances of Fay took place when Monona, Maya, and I were vacationing in Pegosa Springs, Colorado during the summer six or seven years ago. Fay and Monona saw signs posted in town inviting people to a square dance in a local town hall. Loving dance, Fay and Monona decided we should go.
We drove over to the hall after dinner. When we walked in, the Chinese family was met by a group of about thirty local Pegosa folks who dance every week and some were professionals at calling the dances all over the West. Whatever you might imagine would happen when out of towners would meet up with the locals, we were greeted with open arms and big smiles. Fay just jumped in and danced about every chance she had from the easiest to the most difficult square dances. Monona was not far behind.
It was really a wonderful evening. Everyone wanted Fay as a partner and we talked with folks for a couple of hours before the evening ended, enjoying the homemade refreshments. Fay loved it and her smile never left her face. She is a real pro and she had a real sense of adventure. But most of all, she was united to anyone who wanted to dance and there was nothing she enjoyed more than that.

Fay and I became close friends many years ago while working at DuPont. At the time, women scientists were a rarity and we shared many a laugh and sometimes a commiseration about that. Fay was a woman of wonderfully strong opinions and tremendous loyalty for family and friends. Although we came from extremely different childhoods, we shared similar aspirations, working experiences, and sense of humor. I will cherish the memories of our friendship, our families together, her authenticity as a person, and her adventurous spirit forever. Tricia Watson