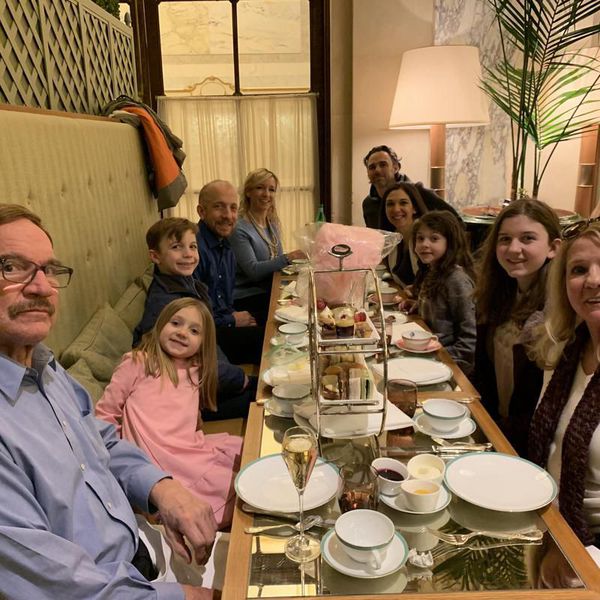 “It doesn’t matter who my father was; it matters who I remember he was.” -Anne Sexton 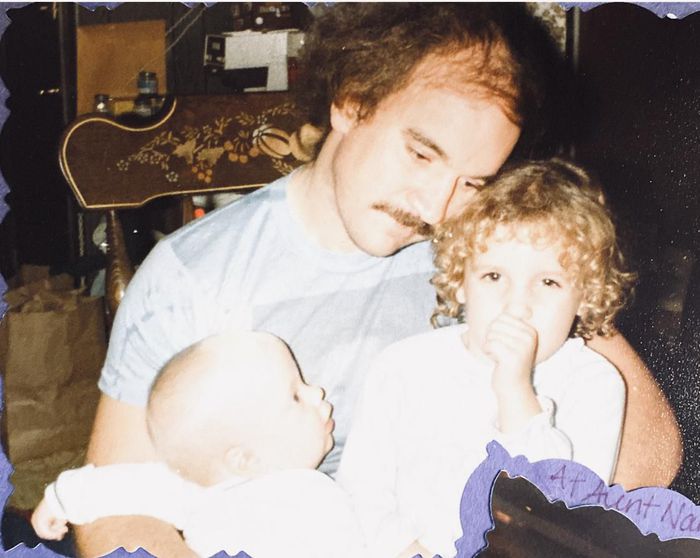 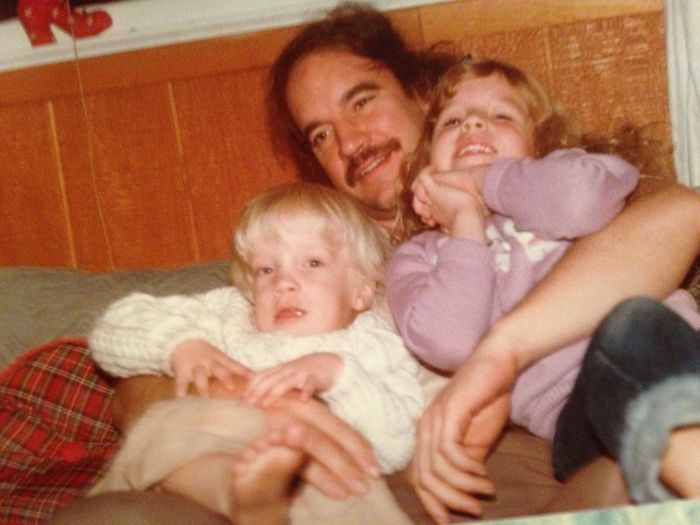 Our dad used to say that his mom always told him what a great mom she was, but what she never understood was that he was a great kid, which made it easy for her to be a great mom.

Our dad always told us we were great kids, so it was easy for him to be a great dad.  And he was a great dad. Though his mental illness overshadowed much of the past two decades of his life, and was the ultimate cause of his death, we do not want it to define him, and hope that you are able to share pictures and memories of him on these pages to help us all heal as we try to process what happened. Despite the challenges we faced lately trying to communicate with him and get him through life's basic motions, the dad we remember is not who he was on his worst days, but who he was on his best - since that is truly who he was.

Growing up, we didn't see him a lot.  He spent A LOT of time at the office, building his thriving dental practice from the ground up. As kids, we remember several vacations cut short and Sunday/Christmas Day/"insert any holiday here" emergency appointments disrupting whatever we may be doing as a family because a patient was in pain and needed him. During the typical workweek, he would often go to the office before 6am and not get home until well past 9pm, (when our mom would make him dinner from scratch - AND serve it to him on a tray in bed). He would see patients on Saturday AND Sunday (totally unheard of back then!). He loved being there for his patients - in the office, he was magnanimous and garrulous - we still smile remembering him loudly laughing from one room to the next on the heels of a story he had just told.  He let patients pay what they could if they were between jobs or otherwise struggling, and would even accept homegrown produce in exchange for his services.  He loved his patients, and his patients loved him, too - the office was a second family to him. We still laugh remembering one patient who would come into the office every Halloween so my dad could give her "real" vampire fangs! 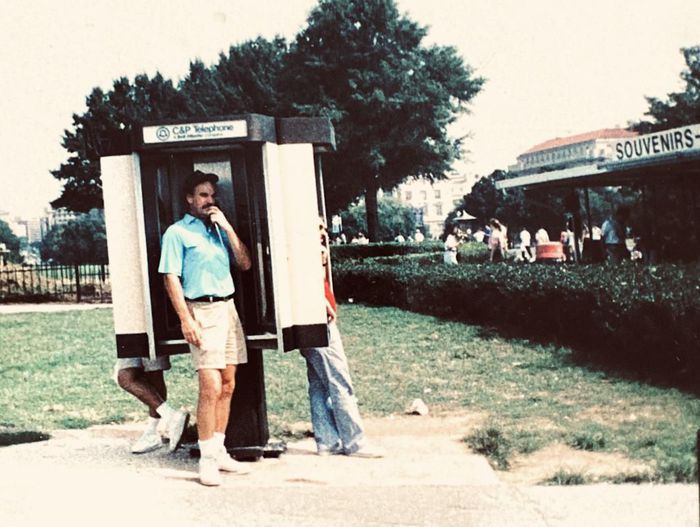 Daddy calling a patient on the side of the road when we were on vacation in Washington, D.C.Grandkids - this is a pay phone, which is what people used before everyone had a cell phone :)

Our dad worked hard so he could play hard. He bought a shore house in Avalon when we were small (the story goes that "I" picked the house because I liked little green glass birds that were in the window - the owners gave them to us with the house, and I actually still have them sitting in my office today!). Then our dad realized he didn't really like the beach all that much, and sold it - which is so our dad. After that, instead of summers at the beach, we took trips - we tried Puerto Rico, St. Croix, and Bermuda, but our dad (again, who did not really like the beach!) wasn't enamored with "island time" (he was also not known for his patience). Our mom and he had gone to the Greenbrier a few times so my mom could go to the cooking school there (and my dad took tennis lessons - this is before he discovered his love affair with golf!), and it evolved into our regular family vacation destination, making it the source of many of our favorite childhood memories (except for the summer I fell and almost died when horseback riding there, that wasn't a family favorite - though it did give me an adventurous story to tell during sorority rush!). 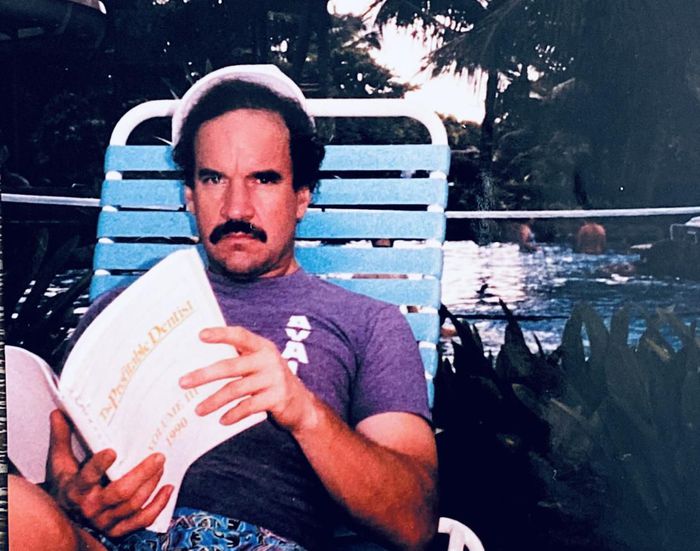 Dad in Puerto Rico - his facial expression pretty much sums up how he felt about the beach (despite sporting an Avalon T!), and about me taking obnoxious pictures of him. Also love the light "beach read" he brought along - "The Profitable Dentist." 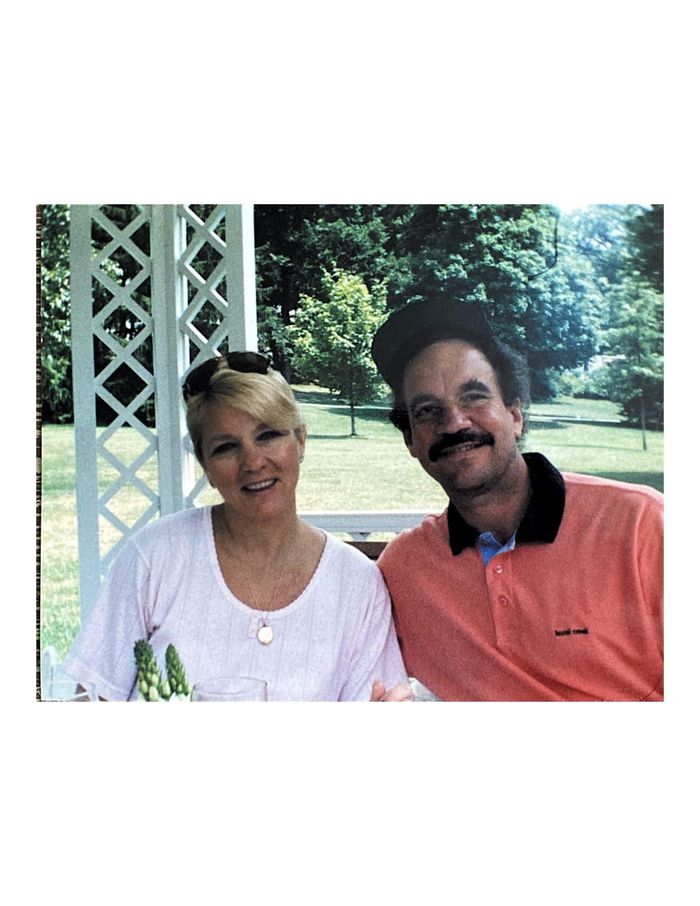 Our dad loved to arrange private lunches for our family in the Gazebo at the Greenbrier. This is one of our favorite pics from one of those meals.

Our dad had bad knees from playing football (he had had several knee replacements), and he begrudgingly turned from football to tennis to golf as his knees creaked more and more. But what had started as a fallback distraction became one of the great loves of his life. If he wasn't at the office, he was golfing. (To be fair, he could also be at the gym, since he also obsessively worked out at least 2 or 3 hours a day when he could. He and our mom would get to the gym hours before their favorite spin class to reserve "their" bikes, and then my dad would wander around lifting weights and giving people unsolicited feedback on their form while waiting for class to start). He loved hitting balls, playing a round of golf with Bobby or a group of his friends, or swinging his empty hands in a phantom golf swing wherever he could (and I mean anywhere - particularly charming when we were easily mortified teenagers! I remember him almost knocking over a kid in line for a ride at Disney World because he abruptly stopped to practice a drive). He and Bobby would travel often for golf lessons, and you couldn't walk around our house without kicking a golf ball, tripping over a golf club, or stepping on a tee (our dad was also not known for his organizational skills). Golf frustrated him like hell (he was always complaining he was terrible, but then the next minute saying that he had found THE golf instructor who was going to teach him the perfect swing), but he loved it. He was excited to teach his grandchildren how to golf and spend summer weekends out on the golf course with them. 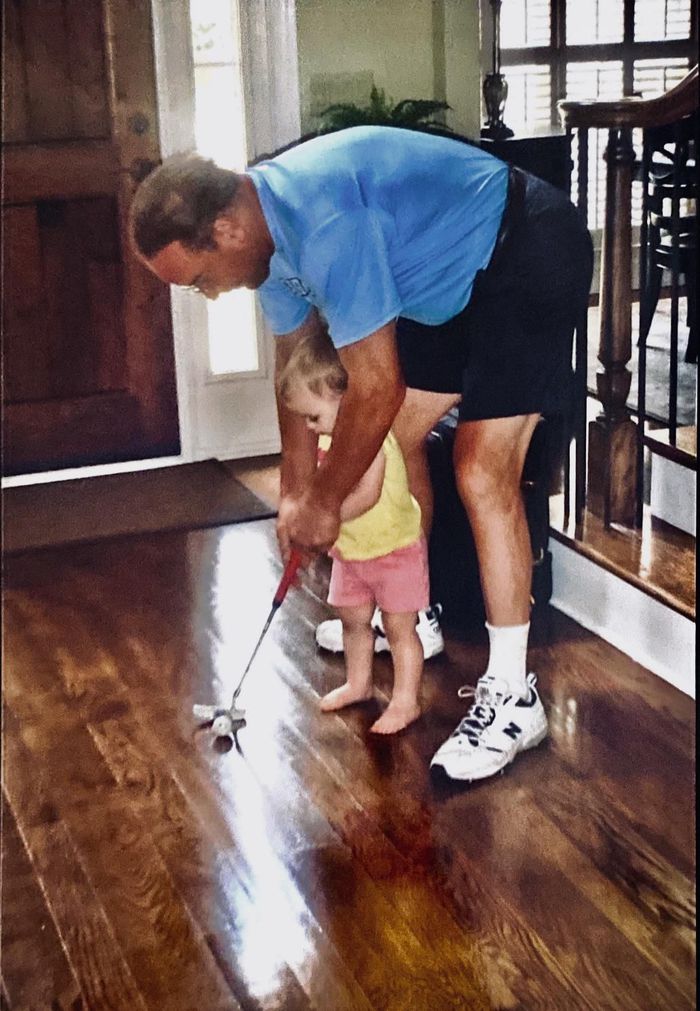 Buying Ashlyn her first golf club at ~18 months, and teaching her how to swing - in my foyer.

It's nearly impossible to write this. I feel like I am not doing my dad justice by cherrypicking the random memories popping into my head on this given moment, but it's impossible to capture the full essence of someone in a few short paragraphs - especially someone who lived as largely as he did when he was well.

My dad was bigger than his disease, but some days, it was bigger than him.  He fought like hell against it, with my brother and me with him every step of the way, but it wasn't enough. We are struggling through that burden and trying not to focus on the "what ifs" and "what could have beens," but instead are looking for the stories to make us cry - but with laughter. 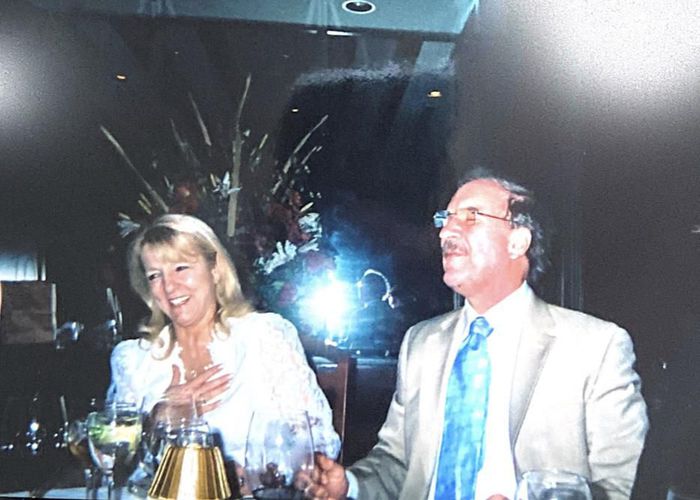 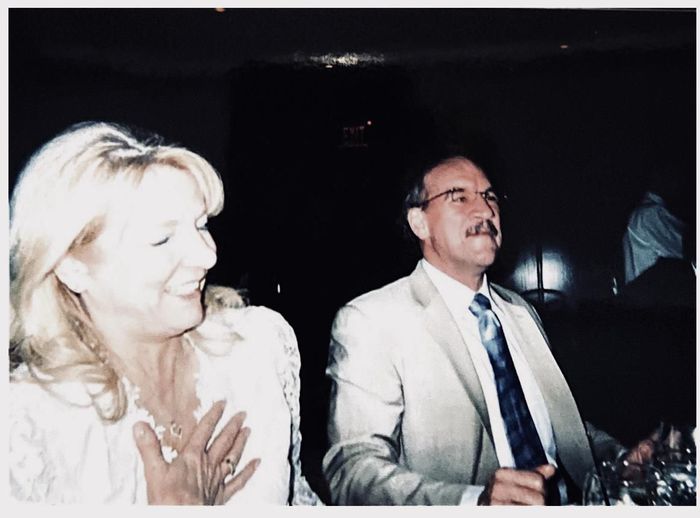 Love these pictures from the table cameras at my wedding, when Dr. Day did a consult on my uncle's teeth mid-reception and also took a nap in his car! - Anne 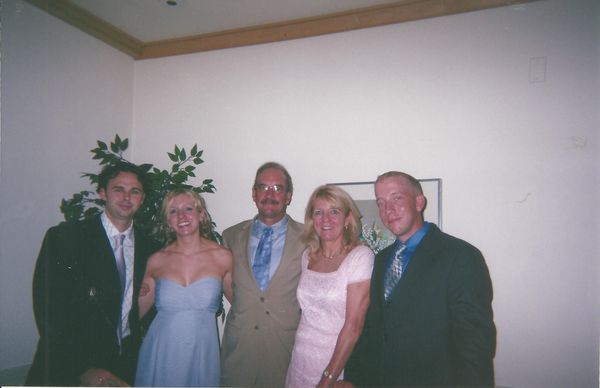 I love these!!! Thank you for posting them

Picture from his football days. 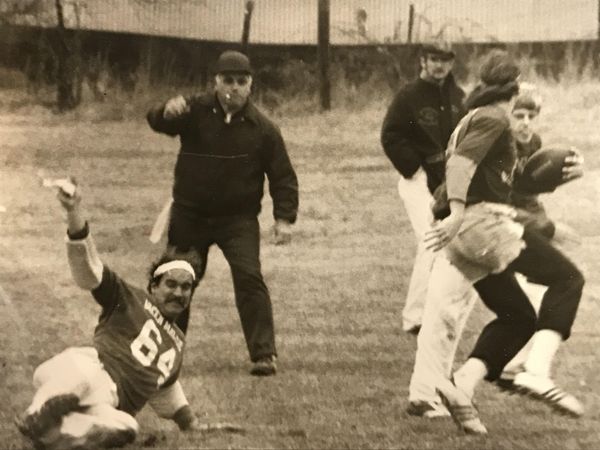 One thing your dad and I had in common was a love of sports. It didn't matter if it were the Phillies, Eagles, Flyers or Sixers he was always the Monday morning quarterback. His vast interest in sports always kept me on my toes. I posted a picture of your dad and mom from June 2018', your dad had won the bid for a live broadcast by WIP with a guest appearance by Ray Didinger, your dad was a big fan of Ray, he was so happy to have Ray sign his book. That was one of the last times that I saw him, that was such a fun afternoon. That was one of the great things about working with your dad, we did a lot of laughing and that is how I will remember him.❤️ 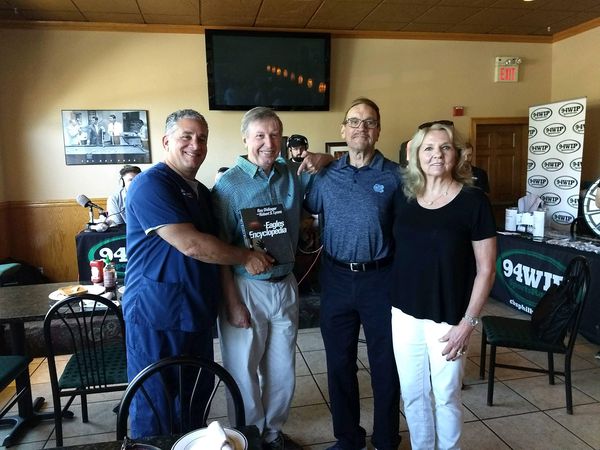 Thank you for sharing this! I love this - reminds me how he used to torture me by only listening to WIP sports radio when he picked me up from school when I just wanted to listen to Top 40!

He loved my mom! 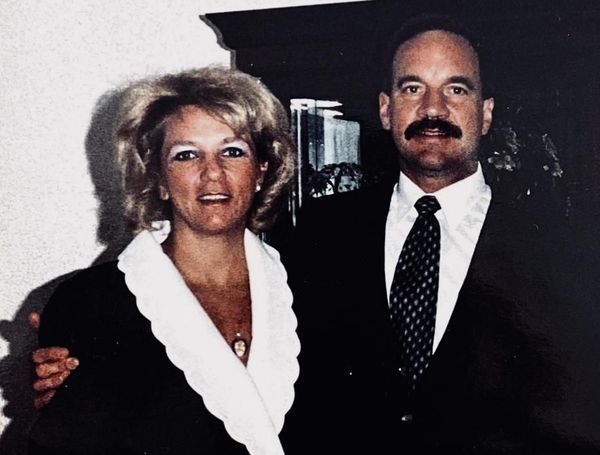 He loved my friends! 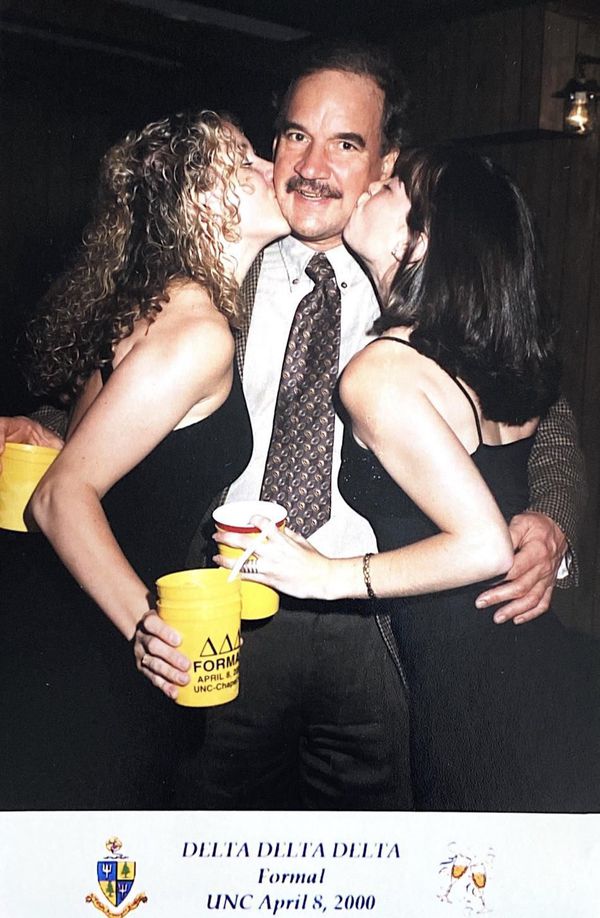