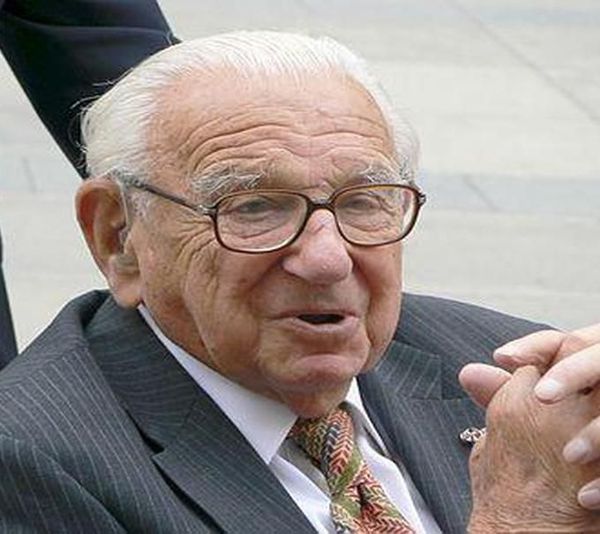 Known as "Britain's Schindler," Nicolas Winton successfully evacuated 669 children, most of whom were Jewish, from Czechoslovakia in the years preceding the second world war. He was born on May 19, 1909 in London, where he spent his childhood. His humanitarian path began in 1938, when he decided to skip a skiing getaway and instead go to Prague.  Winton was called to Czechoslovakia by his friend, Martin Blake, who wanted him to help in Jewish welfare work.  He soon spearheaded a children's section of the British Committee for Refugees from Czechoslovakia, designed to protect and relocate at risk Jewish children from Nazis.

Like much of Europe at the time, Great Britain had increasingly strict immigration policies. After the Évian Conference in 1938, Britain decided to not let any more Jewish refugees into the country. Winton could not let that stop him - and he didn't. He began to take applications for child refugee evacuations from parents, though without official authorization from the British government. Thousands of parents lined up outside his office, hoping that their children would be saved. After Kristallnacht occurred in November 1938, the British parliament approved an emergency measure, commonly called Kindertransport, which allowed child refugees under 17 entry to the country, provided they had a home to live in and a 50 pound deposit to ensure their eventual return to their home country. He rushed back to London to raise funds for the children. Time was of the essence, since Nazi forces were expanding exponentially, particularly in South Eastern Europe.

Winton quickly raised enough money to save hundreds of children, but another obstacle soon came his way. In order to get to Great Britain the children would have to cross through the Netherlands, which had officially closed its borders to all Jewish refugees after Kristallnacht. Immigration officers would search tirelessly for Jewish refugees on the border, and swiftly returned them to Germany when found. Luckily, the British government had already passed the measure allowing child refugees, meaning that the children's migration across the continent was backed by the most powerful country in Europe. This backing allowed them to pass through the Netherlands smoothly, and eventually make it to Great Britain. 669 children were saved from the terrors of the Holocaust, thanks to Wilton.

Later in his life, his remarkable actions were recognized - the Czech government gave him the Order of the White Lion, their highest honor. He was also knighted by the British government, in recognition of his work. He died peacefully in his sleep on July 1, 2015 at 106 years old. Wilton's death took place exactly 76 years after 241 of the children who he rescued left Czechoslovakia to come to Britain.