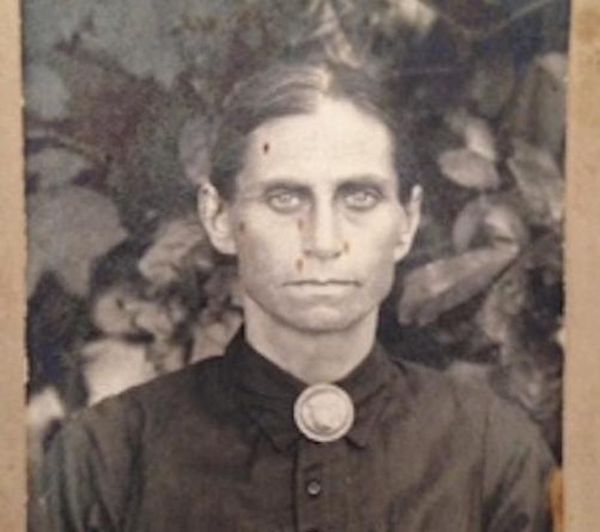 The century-old image is not meant to please. The hair is tidy but severe, the mouth hard, the eyes haunted. A few pleats in the bodice cannot soften the dark dress, its collar held rigid with a large cameo that suggests the importance of the occasion.

The subject is Sarah Ann Butrum, the last child born to James L. Butrum and Margaret Steenbergen, both Kentucky-born, though Margaret’s ancestry was Dutch.

James was a widower with two small children when he married Margaret 11 weeks after his first wife died. They worked a farm in Allen County, near the little town of Puncheon, and welcomed three daughters of their own.

In 1861, James enlisted as a private in the Union Army. He spent the next three years in and out of military hospitals, having contracted heart disease as a result of “hard marching and exposure.” Honorably discharged just before Christmas 1864, James returned to his family and to farming.

When Sarah Ann was born a year and a half later, her parents inexplicably gave her the same name as her father’s dead wife.

In 1870, all six of the Butrum children lived at home. A decade later, only 14-year-old Sarah Ann and two unmarried sisters remained. After her husband died of a heart attack in 1881, Margaret took her widow’s pension and her youngest child and moved the 12 miles to Macon County, Tennessee.

At 19, Sarah Ann married Oliver Philip (O.P.) Payne, a 26-year-old Macon County farmer. Described by one granddaughter as a small man with soft features, and another as a mean man, he struggled to farm despite having a clubfoot that required him to make his own shoes.

At some point in her 40’s, Sarah Ann developed the dreaded hacking cough associated with tuberculosis, then second only to heart disease as the leading cause of death in America. It was called the white plague, because it drained its victims of color, or consumption, because it seemingly devoured the body. Macon County (pop. 15,000) recorded 15 deaths from consumption in 1912.

Left motherless were Sarah Ann’s five children still living at home, the youngest of whom was eight. O.P. and Sarah Ann’s first grandchild, Vola Mai, was 13 days old when her grandmother died.

The formal, unflattering image of Sarah Ann is a photo of record, likely taken and preserved for the sake of children who would need it to remember their mother’s face. It was found last year in an old suitcase, in a small plastic bag that also contained a broken comb and a chaw of tobacco.

On the back, written in pencil by Annie: My mother Sarah Ann Payne.