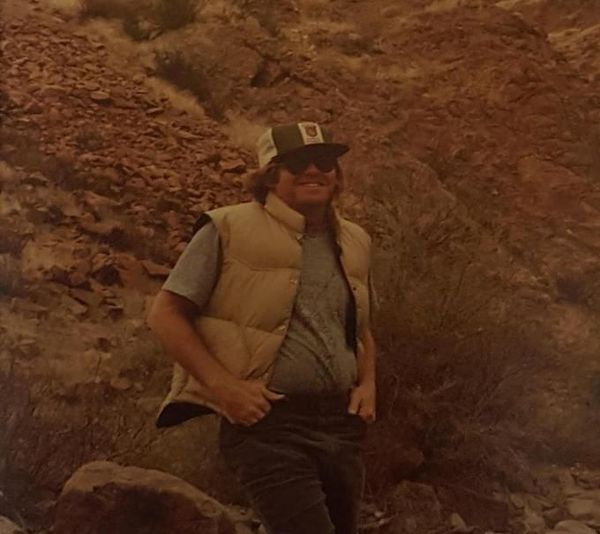 Harry Robert Yewens hit his last long drive on July 20, 2016, and is now sitting back at the 19th hole, sipping a big frosty margarita.
Harry was born on October 18, 1946 to Harry Robert and Gwendolyn Swingle Yewens, in Scranton, PA. Growing up, his family moved several times and finally settled in Houston in 1957. He was a graduate of St. Stephen’s Episcopal School in Austin. In the summers he attended Ozarks Boys Camp. While living in Austin, he worked as a counselor at the Brown School. Later, he received his BS in Agronomy from Texas A&M University in 1979, specializing in turf grass management.
Harry loved the outdoors, including camping and hiking. In the late 1960’s he spent six months hitch-hiking from Texas to Canada and back. One of his favorite spots was Big Bend National Park; he had a special fondness for the Texas Hill Country.
Nowhere was his devotion to the outdoors more compelling than in his life-long commitment to the great game of golf. He began his long career in the golfing industry by helping construct the course at The Woodlands.  As a partner in Golf Unlimited Incorporated, he had an essential hand in designing such courses as Old Orchard, Golf Club, Longwood, Glenloch Farms, ColoVista, and many others. He preferred links style courses, but if you put a course in front of him, he’d play it! In fact, he was a champion player. One year, he even won the title of Senior Amateur Golfer for Texas.
He was active in the Golf Course Superintendent Association of America, serving as President of the Lone Star GCSA chapter. The Texas Trophy Golf tournament, which the Lone Star chapter holds each year for superintendents around the state, awards a trophy named after him at their annual tournament. The Harry Yewens Trophy travels to the medalist winner each year. Harry was one of the founding players of the Texas Trophy and helped start the tradition. He also organized several charity golf tournaments, raising funds for a diverse array of non-profit organizations.
In addition to golf, he loved playing board games, cards—anything competitive—as well as dancing and live music. He was in the audience on the final night of the Armadillo World Headquarters in Austin. He particularly enjoyed the Moody Blues, Asleep at the Wheel, and the Texas Tornadoes. And if there was Mexican food to be eaten, he’d place his order.
In February, 2012 he met his soul mate Judi Brady. Together, they played golf, gardened, spent time with their children and grandchildren, visited California, and went on numerous road trips.
Harry was preceded in death by his parents, his step-mother Phyllis Rathburn Yewens, his mother-in-law Patricia Childress, and his brother-in-law Bill Meisner.
He is survived by daughter Margaret Ann Yewens, son Robert Riley Yewens, life partner Judi Brady, sister Sally Meisner, and the following family members: Ken and Kathi Appelt, Patti and Spencer Miller, Mark and Claudia Meisner, Blake Meisner and Stephanie Jones, Casey Meisner, Amy and Ronnie Nichols, Jacob Appelt, Cooper and Laurel Appelt, Will Miller, Max Miller, Lindsay and James Lillard, Lauren Olivia Lillard, Leigh Morgan and Russ Budro, Austin Budro, Zachary Budro, and numerous great nieces and nephews. He also leaves behind his furry hat, and his best friend Craig Owen.
The family would like to thank the wonderful doctors, nurses and staff members of MD Anderson Cancer Center for the ten years of care and support that they provided.
There will be a celebration of Harry’s life on Saturday, July 30th, from 2-5 p.m. at the Corner Pub, 302 N. Main Street, Conroe TX 77301. In lieu of flowers, the family requests donations to the scholarship fund at Lone Star GCSA. PO Box 571923 Houston, TX  77257-1923.