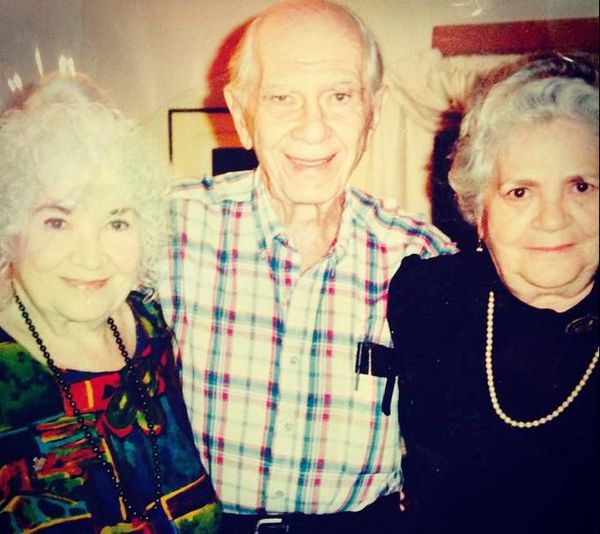 The Story of My Grandfather

My grandfather, Julius Willner, grew up in Vienna, Austria. His parents were Polish and they moved to Austria to create a new life for their family. A photo of my great-grandmother hung on my grandfather’s wall all his life. It was the only image of her we ever saw. She was beautiful.

He was the oldest and he had two younger sisters; Katie and Rachel. Their childhood and adolescence seemed fairly simple, maybe even uneventful. I can’t be sure. His sister Rosie always told me the story of how my grandfather bought her a bunch of lollipops when she was a little girl. It seemed to be the one story from her youth she held onto. But I don’t know much about my grandfather’s life before the war.

Everything changed in 1938. On March 12th of 1938 Austria was joined with Germany. My grandfather was 23 ½ years old and serving in the Austrian army. Of the stories he did tell us, many centered on the events that followed. For school assignments he’d recall how the Nazi’z began to beat Jewish people on the street. His tone would fall somber. He’d seem to disappear for a moment as he went back to nights of broken dreams.

After having served a year and four days service he was discharged for being a Jew.  The Nazis didn’t allow them in the army. The next couple of months were very difficult for him and his family. The Nazi’s began to break them. Their rights were taken away one by one. Many Jews tried to emigrate out of Austria. The city of Vienna with its large Jewish population, suffered first from the intensified anti-Jewish measures imposed on the community. My great-grandfather saw this and left to find refuge for his family in Poland. Germany’s invasion of Poland was quick and deportation to concentration camps even quicker. He was never heard from again.

In June of 1938 my grandfather was in the street and some member of the Hitler Youth pointed him out saying, “here is a Jew.” He was immediately arrested.  He was kept in police custody for three days. After that he was sent to the train station. There the Nazi guards counted them and every tenth person they shot in the head. I always wonder what number my grandfather was.

From there he was forced to go out on work details. He worked in a quarry with a sledgehammer and a pick. They wore prison uniforms embroidered with the Star of David. They were forced to sleep in big barracks on planks of wood, piled up on each other. He said that they used to give them lashes with a whip and make them count along as they hit them. Grandpa said that they would kill people just as they pleased, and that they wanted to kill the children most of all.

That was what we now know as Dachau. From there he was sent to Buchenwald Concentration Camp. He spoke of the bitter cold and how if people were caught trying to put newspapers under their prison uniforms to insulate themselves, the Nazis would beat them. In Buchenwald there was also forced labor. They moved bricks all day. He lived in terror.

In May of 1939 he was released from Buchenwald. His aunt in America sponsored him to come to America. From Vienna he went to Switzerland and then to England. From England he went on a ship, the S.S. Samaria to New Haven Connecticut. The war started in September 1939. My grandfather arrived in the U.S. on July 27th 1939 and by May 16th 1941 he was drafted into the U.S. army. Not too long after that he was sent back to Europe to fight the Nazis. He participated in the Battle of the Bulge.

“The first person from my family to flee from Austria was my sister Rachel. She fled to Palestine. She crossed over land and swam onto the shores of Palestine. Then my sister Katie left. She went to America. By the time I came back from the concentration camp, only my mother was in our apartment, my father had left for Poland in hope of finding a place for us to stay with our family that lived there,” he told my sister, Melissa Willner in an interview for a school assignment in 1998.

“When I left I already knew I’d never see my parents again,” He continued. “We tried to get them out, but they were killed. My sisters and I were lucky enough to escape with our lives.”

The truth is my grandfather spoke little of his experiences during the war. All of this came from the one interview, only a few years before his death. I’ve told as much of it as I can because I know it took so much of him from us. And because I think it’s important.

After having immigrated to the United States in July of 1939 he settled in residing initially in the Bronx before moving to around 14th Street in Manhattan. In May of 1941 he was inducted into active service. He participated in a number of major European battles and campaigns. He won the EAME Theater Ribbon with 3 Bronze Stars. He also won the American Defense Service Medal as well as a Good Conduct Ribbon. He was officially discharged from service at Camp Atterbury in Indiana.

On August 27, 1950, in an intimate gathering of close friends and family, he married my grandmother Lillian Porin. A photograph was taken that sat on their bedroom dresser throughout their married life. They were married 40 years.

They had five children and adopted a sixth; Daniel, Phillip, Arnold, Neal(my father), Cybelle and Joseph (Joey). From there a new chapter started. One in which my grandfather spent many years working to support his family and give them whatever he could. He held many jobs; my favorite was his time as a train conductor. Just imagining my grandfather’s Austrian accent over the loudspeaker makes me smile. They lived in a small apartment in Coney Island where they had a view of the Cyclone. After that, he, his wife, Cybelle and Joey spent some time in Israel before returning back to Brooklyn. By this time, Daniel, Phillip and Neal had all married and begun to have children. The attendees of family functions continued to grow.

Lillian would later become sick and confined to a wheelchair. My grandfather and my uncle Joseph cared for her until her death in 1991.

My grandfather lived another ten years. He traveled the world. He and Daniel’s father-n-law took a few trips together. He even went with my mother to visit her family in South Africa.  Whenever he could he saw his sisters. Both lived in New York.

After my grandmother passed away he would come over to us every Friday night for dinner.  Forever quiet, but present. He was intelligent and well-read (like my father). He was a serious man. I had to grow up to get to know him; he didn’t really know how to connect with me until I was a teenager. He had wet kisses and a warm smile. And with each passing year I felt him soften more and more.

My uncle, his son, Joey, died of AIDS related complications in February of 2001. He spent the last few months of his life by his side.

My grandfather passed away nine months later. He had nine grandchildren, three-daughters-in-law, one son-in-law, two sisters and five children mourning his loss.

I remember and love him every day.