A Muslim American soldier, who won the Bronze Star and Purple Heart -- and became a hero at the Democratic Convention

Captain Humayun Saqib Muazzam Khan (September 9, 1976 – June 8, 2004)] was an American soldier who was killed in Iraq during Operation Iraqi Freedom.

Khan was born in the United Arab Emirates to Khizr and Ghazala Khan, was of Pakistani heritage, and was raised in Silver Spring, Maryland, United States. As a young child, Khan read extensively about Thomas Jefferson. In high school, he taught disabledchildren swimming. Khan graduated from John F. Kennedy High School in 2000, and the University of Virginia (U.Va.) in 2004. At U.Va., Khan joined the university's Army Reserve Officers' Training Corps. Khan joined the United States Army to pay for law school, and had planned on becoming a military lawyer. In the Army, Khan achieved the rank of captain.

In 2004, Khan was assigned to the Headquarters Company of the 201st Forward Support Battalion, 1st Infantry Division in Vilseck, Germany. Three to four months into his tour of duty in Iraq, on June 8 near Baqubah, Khan was inspecting a guard post when a suspicious taxicab began approaching too quickly. Ordering his subordinates away from the vehicle, Khan ran forward 10-15 steps and was killed by a suicide car bomb fitted with an improvised explosive device. The car detonated before it could reach the gates or the nearby mess hall where hundreds of soldiers were eating breakfast. The blast also killed the two occupants of the vehicle and two Iraqi bystanders. On June 15, Khan was buried at Arlington National Cemetery.

Khan was also posthumously awarded the Bronze Star Medal and the Purple Heart.

THE TRIBUTE AT THE DEMOCRATIC CONVENTION

Tonight, we are honored to stand here as the parents of Capt.Humayun Khan, and as patriotic American Muslims with undivided loyalty to our country.

Like many immigrants, we came to this country empty-handed. We believed in American democracy — that with hard work and the goodness of this country, we could share in and contribute to its blessings.

We were blessed to raise our three sons in a nation where they were free to be themselves and follow their dreams.

Our son, Humayun, had dreams of being a military lawyer. But he put those dreams aside the day he sacrificed his life to save his fellow soldiers.

Hillary Clinton was right when she called my son "the best of America."

If it was up to Donald Trump, he never would have been in America.

Donald Trump consistently smears the character of Muslims. He disrespects other minorities, women, judges, even his own party leadership. He vows to build walls and ban us from this country.

Donald Trump, you are asking Americans to trust you with our future. Let me ask you: Have you even read the U.S. Constitution? I will gladly lend you my copy. In this document, look for the words "liberty" and "equal protection of law."

Have you ever been to Arlington Cemetery? Go look at the graves of the brave patriots who died defending America — you will see all faiths, genders, and ethnicities.

You have sacrificed nothing and no one.

We can't solve our problems by building walls and sowing division.

We are Stronger Together.

And we will keep getting stronger when Hillary Clinton becomes our next President.

Dana J.H. Pittard, Khan's commanding officer, described why Khan did what he did:

We employed more than 1,000 Iraqi citizens at Camp Warhorse. We were slowly making progress in the province, the economy and security was improving, and the insurgents were losing steam. Security at Camp Warhorse was extremely tight. Unfortunately, we had killed or wounded several innocent Iraqi drivers at our gates over the previous month for failing to heed our warning signs and our gate guards’ instructions. Each of these incidents potentially hurt our relationship with local Iraqis. Humayun had fostered a warm relationship with our local workforce, and he and his unit were determined to break the cycle of violence by reducing or eliminating unnecessary deaths and injuries at our gates.

On the morning of June 8, 2004, the gate guards alerted Humayun to an orange-and-white taxi cab slowly moving through our serpentine barriers during the “rush hour” of Iraqi day workers coming onto camp. Humayun probably moved toward the suspicious vehicle to avoid killing the driver unnecessarily, but at some point, he concluded that something was wrong and ordered his men to hit the dirt. The driver detonated his car bomb, killing Humayun and two Iraqi citizens. Humayun died trying to save the lives of innocent Iraqis. His brave effort to approach the vehicle probably saved American lives as well.

I raced to the gate upon hearing the huge explosion. It was an awful scene. Battalion commander Lt. Col. Dan Mitchell and his soldiers had resecured the destroyed gate, but we lost more than a gate, we lost a member of our team — of our family. Humayun’s death caused sadness throughout our entire brigade combat team. There were three different memorial services for him — one with our soldiers at Camp Warhorse, a second with our rear detachment and family members at our home base in Vilseck, Germany, and a third with the Khan family in United States. We named the 201st Battalion headquarters building on Camp Warhorse the Khan Building in his honor.

His parents describe their son to Lawrence O'Donnell:

Amir Ali Guerami, a boy who was bullied in a Maryland school, later described to The New York Times how Humayan would intervene to protect him:

There were few Muslims, and that made Mr. Guerami different. And he was very overweight. He was taunted and beaten up. His middle name was Patrick. As he walked down the school hallways, bullies would bellow, “Fat Rick.”

And Humayun would hear this and step in. He would walk alongside him, a sentry staring the bullies down, deflecting them. And he intervened when Mr. Guerami was being roughed up outside the library. When he was punched in the throat in gym class and could not breathe.

This cemented a friendship that continued throughout high school. Humayun was Mr. Guerami’s defender and his motivator. He urged him to exercise and to diet. And after his sophomore year, Mr. Guerami was 60 pounds lighter....

The memories returned. “He had an impact on my life,” he said. “You read about kids being bullied in school and then their hurting themselves. He owed me nothing, a complete stranger. Yet he stood up for me. He was a savior.”

Khizr Khan on why his son joined ROTC:and Ghazala Khan

"He would meet in different circles members of the ROTC and they were his classmates and they would clearly see the difference in their discipline and their character, in their dealing with one another and that impressed him very much. He was a wonderful and deliberate person in his spirit. And he told us that he finds it very attractive that he would join ROTC.  …doing things with honor and dignity."

A friend from the University of Virginia ROTC said during a memorial service at the school:

James P. Holzgrefe, who graduated with Khan in 2000 and served with him in ROTC, praised Khan for his abilities to build consensus and resolve conflict as a student at U.Va. — skills he applied in Iraq, where he established a jobs program to find work for Iraqis.

Rebecca Skinner, another former classmate who is now an instructor with the ROTC program at U.Va. and at Fort Monroe, Va.,  added: “He gave joy to everyone who knew him.”

The University of Virginia website reported that "while he was a student, Khan played intramural sports and volunteered at Madison House, which coordinates service to the community. A conference room at the Army ROTC headquarters is named in Khan’s memory. UVA also created the Capt. Humayun S. Khan Scholar-Soldier-Statesman Award to honor him."

It was funny how she had known Captain Khan only a couple of months and yet it seemed like she had known him so much longer. It was the way he treated her and all of the soldiers. “He didn’t talk to you like he was in charge of you, but like a friend,” she said. “He taught you how to be better. Not better tanker or better fueler. Better human being.”

He made sandwiches for his soldiers when there was no time to get to lunch. He had such an easy sense of humor. “I read where someone called him a soldier’s officer,” she said. “To me, he was a human’s human.”

The Washington Post described the work he did trying to repair relations with local Iraqis:

During his three months in Iraq, Khan helped put Iraqi civilians to work for $5 an hour patrolling the streets of Baquba under the U.S. Army, his father said.

The program, dubbed the United States-Iraq Sponsorship Program, was intended to help combat high unemployment and provide the local population with security and peace, his father said.

"He was always a peacemaker," Khizr Khan said, "always seeing an opportunity to give. He always said to the Iraqis, 'We're here not to hurt you but to help you.'.... "

He fell in love with a woman in Germany named Irene Auer:

There were many who spoke English very badly, or with a lot of slang, but not him,” she said. “He spoke beautiful English and had a very beautiful voice....”  In September 2003, Ms. Auer flew with Captain Khan to the United States to meet his father. This was serious stuff.

Captain Khan loved to have a good debate with Ms. Auer, her family and her friends. One of his favorite topics was the meaning of life.

As it happens, she opposed the war in Iraq. But he accepted his duty and was proud to be a soldier. “Once he even said to me, ‘You know that I am married,’ ” she said. “I asked him, ‘What do you mean you’re married?’ and he told me, ‘Yes, I am married to the U.S. Army.’ ”

Ghazala Khan on her final conversation with her son:

"Dont go out and do something stupid. Don’t be a hero…. He told me 'mom, I have a responsibility that I can not deny. I have to be taking care of my soldiers because they depend on me.'  Still I would keep tell him, 'be safe, don’t become hero for me. Just be my son.  Come back as a son.'  He came back as a hero." 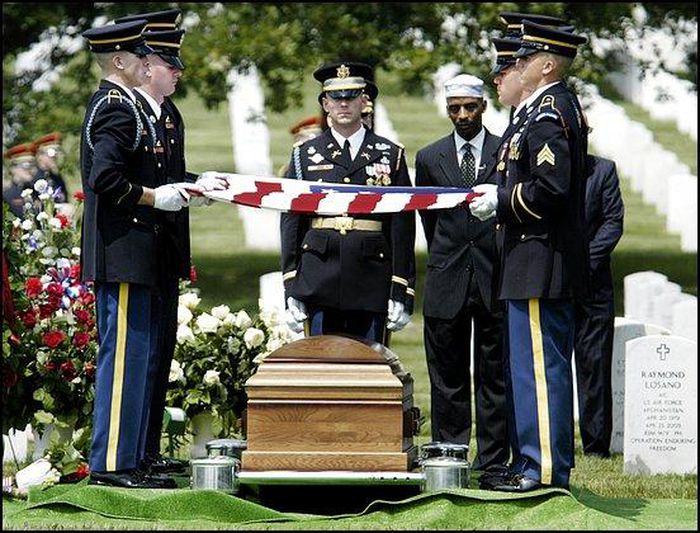 From the Arlington National Cemetery:

He was laid to rest with full military honors. Captain Khan was a Pakistani American who served in the U.S. army as an ordnance officer, being the senior-most community member to die in Iraq. His colleagues and superiors remembered him for his courage, honesty, sense of humor and grace while in the field, even under pressure. Captain Khan's colleagues eulogized his exemplary services and praised him for the leadership he provided to his troops.

The Muslim chaplain who led the Nimaz-e-Janaza after the military honors, specifically highlighted the ethnically-diverse group that had come to pay its respects to Captain Khan. He was one amongst the growing number of Pakistani Americans in the U.S. Army. 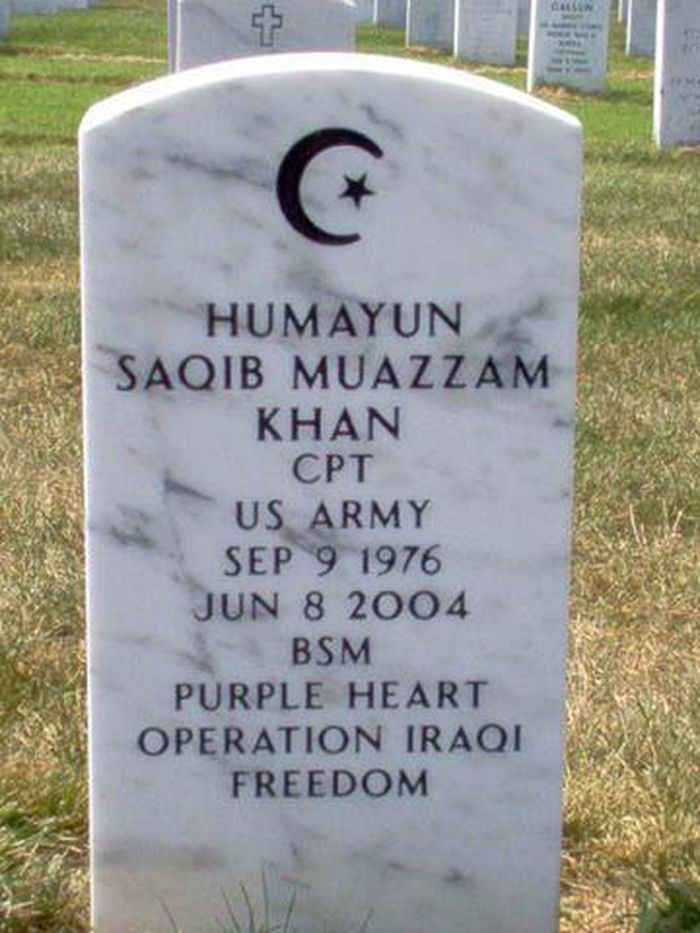 Before the Democratic convention, his father said:

“I am honored and humbled,” he said. “Nowhere but in the United States is it possible that an immigrant who came to the country empty-handed only a few years ago gets to stand in front of patriots and in front of a major political party. ... It is my small share to show the world, by standing there, the goodness of America.” 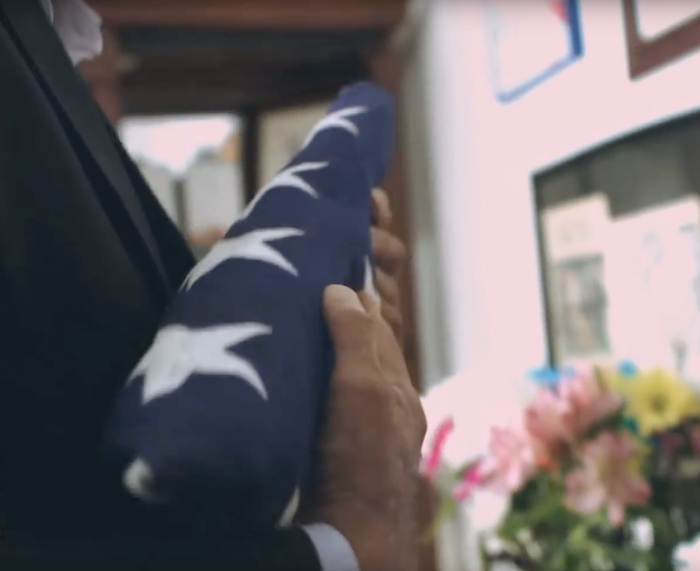