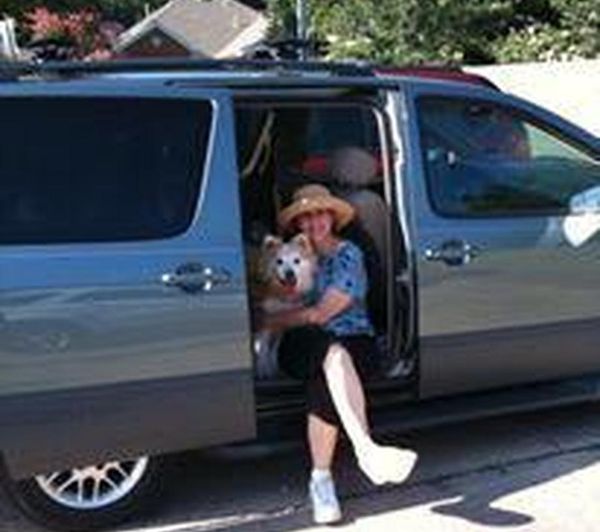 In January 1998, Charlie and I lost our first dog, Wolf, and we waited until March to find another dog to mend our broken hearts. We met Sunny at the Rowlett Animal Shelter, where she had been abandoned, tied to a tree, pregnant. She was 3 or 4 years old and, we were told, "she's a holder," which lucky for us turned out to be true. I thought she looked like Murray on "Mad About You," and I knew right away I wanted her. She had heart worm; her coat was sparse and brittle; she had bags under her eyes. And on the first night we had her, she used what Charlie later would call her woodworking tools (her teeth and nails) to destroy our laundry room. She left her mark on many door frames...and the doors themselves...in the next few years, because she was terrified of storms and suffered from separation anxiety. We eventually put her on Prozac, and she became the perfect dog.

For 12 ½ years, she was a pampered Lakewood pup. She took long daily walks to White Rock Lake with Charlie and me...and often our friend, David. For years, she walked with us on hot school days at 5:30 a.m., and when it got cold, at night, with a bicycle safety light on her collar. I figure I've walked hundreds of miles with Sunny: we climbed to Serpent Lake in Taos together, we hiked the Smoky Mountains, we explored state parks in East Texas and in the Hill Country, but mostly, we walked all over Lakewood. Sadly, those long walks ended a couple of years ago; we took shorter walks, then shorter ones, and in the last few weeks, we could manage only a very slow, labored one out the front door before daylight to pick up the newspaper. Her back legs just didn't work very well any more, she couldn't hear, could barely see, and in the end, was no longer "a holder."

On Sunday, August 22, 2010, shortly after coming home from church, we took Sunny to Hillside Veterinary Clinic, where she had dozens of baths and shots and check-ups over the years, and said goodbye.

Sunny rarely barked, but when she did, it was a sharp report. She loved cold weather and, once, we accidentally left her outside over night when the temp dipped into the teens. She slept that night in a "nest" she made of ground cover and, in the morning, when Charlie got up and went to the back door, she gave him one of those sharp barks as if to say, "Where the hell have you been?" She went to Taos with us one summer and, while tied up outside the dining hall at Fort Burgwin, an errant horse wandered up to check her out. She had wrapped her tether around the pole and had no place left to run. Inside, we heard that sharp bark and came to her rescue. Most recently, that bark let us know, often in the wee hours, that she was stuck in the dog door or had fallen in the hallway.

She had a beautiful golden coat...that's why I named her Sunny...and her fur smelled clean and delicious. Her breath, on the other hand, was a horror show. She loved tuna and bacon treats, and maybe that was part of the problem. She was so tidy about herself that she would step around a puddle on the sidewalk. When she picked up burrs in the Hill Country, she worked on pulling them off her paws during the ride home to Dallas.  It didn't bother her, of course, but she shed so badly that when people asked me her breed, I would tell them she was a Golden Shedder. Her face, even when she got old, had a puppyish quality, and she looked as though she was smiling.  As recently as this spring, someone stopped us on the street and asked me if she was a puppy. Yes, a 16-year-old puppy.

When she was younger, she would spin like a Sufi after pooping, then do a victory lap. We took her to a meadow at White Rock Lake and let her off the leash for that pleasure...both hers and ours. It was an expression of such joy we never got tired of watching her do it. She was a surprisingly fast runner. Brandy (who along with Holly gave us Maya, our Australian shepherd mix) asked once who would win a race, Sunny or Maya.  I bet on Sunny. She was not only fast, but strong, and we imagined that was the Husky in her; somewhere in her DNA, she was pulling a sled in Alaska. It served her well when she didn't want to move; she was a dog who could stand her ground.

Sunny had good manners. She never jumped on people when she met them nor did she get on the furniture. When she liked you, instead of leaping or licking, she would politely lean into you. She loved visiting Granddad at the lake house, jumping out of the van and racing to his big back yard that slopes down to Lake LBJ. And she must have been welcome there. Granddad put in a gate, so the dogs could run free; when he knows we're coming, he sets a big bowl of water on the back stoop. Sunny took naps behind the porch swing or in front of the stove in the living room. Because she hated water, she never was tempted to take a dip in the lake. Baths were no treat, either, but when faced with one, she adopted a placid stoicism.

She wasn't particularly smart or obedient (although we went to school with her, and she learned to walk on the leash correctly), but she was so gentle and sweet that the smallest children would stop us on a walk to pet her. We were never sure she knew her name, because she didn't respond to our calling it; it was as if she was saying, "I can't heeeaaarrrr you!" She did recognize the words "Supper time!" and "Want to go for a ride in the van?" Sometimes, those words made her pirouette with pleasure.  Once, I got home from school, and I heard that telltale bark. She had thrust her head between the iron bars of the back gate and was stuck, for no telling how long. When I went out to free her, she happily backed up and freed herself, apparently unaware that she could have done that all along.

For many years, as soon as the weather cooled down, she would sleep all night on her dog bed under the stairs. When spring arrived, she abandoned her winter den and found a cooler spot. In recent years, she slept upstairs with us; that ended when she no longer could navigate the stairs. At night, while Charlie and I watched TV, she would lie under it and sleep. If a dog barked or a doorbell rang on the air, she would raise her head and cock it, first left, then right, quizzically.

We had Sunny for about a year and a half before we got Maya and, during that time, she buried every rawhide chew bone we gave her. In fact, the minute we gave her one, she would carry it around and whimper until she could get it hidden. Sometimes she "hid" it on her dog bed. The day we brought Maya home, Sunny went outside and dug up all her buried treasure, gathered them around her, and, dirty as they were, chowed down. I always wondered about Sunny's relationship with Maya, who was meant to keep her company when we went off to work all day. They never really played together...Sunny wasn't much for toys, either...but they seemed to have a comfortable understanding. If Maya approached Sunny's territory under the TV, a low growl sent her packing.

Maya struggled to be the Alpha dog, but when she realized that Charlie was that, she allied herself with him, and Sunny became more my dog. When Sunny sought Charlie's affection, Maya would thrust herself between them. Happily for me, I served as a compensatory source of attention. We paired up and, for that reason, I think I'll miss her most of all.

Losing her has been incremental...when she lost her hearing, she no longer greeted me at the door or came running for her supper. When her legs got weak, she needed a boost into the van. Sometimes, at the end, she got lost inside the house, taking a wrong turn on her way to the kitchen or the dog door. I learned to steer her with a touch on her head...I became her seeing-eye person.

On our last trip out of town, in mid-July, I agonized about leaving her. I knew she would have a hard time away from her own home. She went to David's, the closest thing to a home-away-from-home that she had. She didn't do well, despite David's resourcefulness. The floors were slick; there was no dog door; it just wasn't home. When I retrieved her, I promised him, her, and myself that I wouldn't leave her again. I didn't know then how easy it would be to keep that promise.