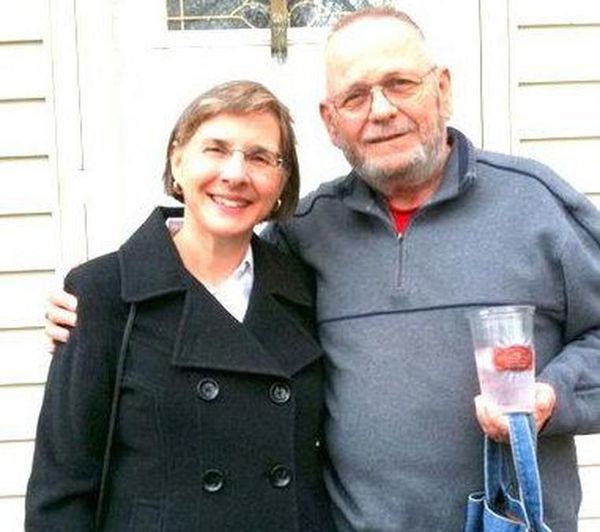 My first memory of my stepfather involves Old Hickory and doughnuts. He and my mom were dating, and he went along when I had to see a doctor in Nashville. I was seven. After my doctor’s visit, he bought me a chocolate doughnut and tomato juice (my choice) for breakfast. And the three of us walked the grounds of Andrew Jackson’s home, The Hermitage, since I was already free from school for the day. I experienced the rare pleasure of being the only child, the focus of attention of both a mom and a dad.

Jeremiah Francis Donohue was born the middle child of clannish, devoutly Catholic first-generation Irish immigrants. They settled close to other family members, first in the Bronx, then in Queens, New York. Jerry, as he was called, started college at Fordham University then joined the Army to free himself of the ties that bound. Once stationed at Fort Campbell, Kentucky, he met my mother, a Baptist country girl five years his senior, a divorced mother of twins, Michael and me.

In 1961, Jerry took us on. My sister, Liz, was born in December, and we all learned to move, first to Clarksville, Tennessee, near Fort Campbell, where my new dad bought us a globe and encouraged us to watch coverage of John Glenn’s first orbit around it. We also gathered in front of our old Admiral TV for popcorn and Saturday Night at the Movies. “The Day the Earth Stood Still” was a favorite. When I was cast as Mary in the school Christmas pageant, Jerry bought me flowers tagged “to the star of the show.” And because of him, my mom learned to make lasagna and corned beef and cabbage.

Soon, we took our first plane ride to Germany, making a stop in New York to meet our new grandparents, who had lilting brogues and served boiled vegetables. My new dad met us when we landed in Frankfort: the five of us squeezed into a borrowed Volkswagen Beetle for the ride to the Army base in Schweinfurt. We lived on the fourth floor of a steam-heated building in an apartment with enough bedrooms and bathrooms for a family twice our size. To escape the indoor heat and the outdoor cold, we met other kids in the building-length basement to trade comic books and peer into the gated air-raid shelters.

While waiting for our car to be shipped from the U.S., we walked everywhere. School was close by, but the base library was not. My brother and I agreed our new dad was smart, because he was always reading. We wanted to be smart, too. So, the three of us would bundle up and trudge through the snow in the early dark to a well-lighted Gothic mansion full of books, where the librarians served hot Dr Pepper with lemon slices floating on top.

Living on an Army base as a kid couldn’t be more fun. We raided Jerry’s foot locker for stuff to play Army with; we shopped for toys at the PX, went to movies for 15 cents, had an ever-evolving choice of playmates, and on payday, we ordered “Pizza Mary” (everything on it) for dinner. There was no television; after school, we read The Hardy Boys and Nancy Drew, played Monopoly or United Nations, or listened to old serials on the radio that sat on top of the refrigerator. I recall watching Jerry polish his brass and spit-shine his boots while we listened to “Beulah.”

It soon became clear to my parents that an enlisted man’s paycheck was inadequate to cover the needs of a family of five. We moved back to the States, to be near family in Louisville, while my dad attended Officer Candidate School in Fort Sill, Oklahoma. When he graduated as a second lieutenant, we packed up once again and headed to Fort Bliss, Texas, where it never rained. Back on base, I enjoyed going to school with other Army brats, becoming a Girl Scout, running track, jumping rope, playing tetherball. I fell in love with pioneer-girl stories and started calling my stepdad “Pa.” He bought me Herman’s Hermits records and issues of “16” magazine full of Ilya Kuryakin photos.

Soon after starting 7th grade, it was time to pack again. Pa had received orders to South Korea. We headed back to Louisville, where my mom’s mother and sister lived. Accustomed to integrated military schools, my brother and I found it difficult to adjust to the open bigotry of our Kentucky classmates. They casually used the “n” word and called us “n” lovers if we complained. Kids there had been in school together since kindergarten, and we were exotic newcomers. When Pa came home a year later, we happily returned to Fort Bliss for 18 months.

In 1969, my dad got orders to Vietnam. On the way back to Louisville to wait for his return, we stopped in Dallas to see the assassination site and visit Six Flags Over Texas. It hit 100 degrees that day, and we drank endless Dr Peppers. Despite the cramped car, the cigarette smoke, and plenty of whining from the back seat, those trips between El Paso and Louisville were the best bonding times for our family. My mom liked to drive, so Pa handled snacks and comedy. I remember cracking up when, put in charge of my sister’s diaper changes, Pa invariably stuck her plastic diaper pants on his head.

My mom wrote to Pa every day when he was in Vietnam. In his letters home, he referred to me as their “big girl.” I was 15 that year, passionate about popular culture and the news: the Chicago 7 trial, Chappaquiddick, Abbey Road, the moon walk, Woodstock, Haight Ashbury, Charles Manson, the anti-war movement. I wrapped a black band around my arm one day and went to school, where the principal’s secretary told me to remove it. But, I complained, my dad is in Vietnam. All the more reason, I’m sure she thought. When he came home, my dad didn’t talk about Vietnam, not to us. Many years later, he told me that the anti-war sentiment was so great that, as soon as he landed in the States, he took off his uniform and threw it in the trash. I’m ashamed now that I didn’t ask him more about his experiences there. I plead the self-centeredness of youth.

Back at Fort Bliss, my dad enrolled at the University of Texas/El Paso to finish his accounting degree, while my brother and I finished high school. He was a good role model, setting himself up to study at the dining-room table after dinner. We talked about my college plans and, when the time came, he took me to freshman orientation at Texas Tech, where I had a journalism scholarship. I stayed in Texas after that, but the rest of my family moved on to Huntsville, Alabama, home of Redstone Arsenal. Pa’s last duty stations were in Wisconsin, and again, in Germany. When he retired and went to work in accounting, he settled in Connecticut for a time, and then Florida, but old habits die hard: he has spent the last few decades in Louisville, Kentucky, an odd fit for that boy from the Bronx.

I grew up with a stepfather at a time when every kid in the class didn’t have one. Pa often was gone for a year at a time, and it wasn’t always easy for him to slip back into line with a family of four who had established their own rules and routines in his absence. He never had a chance to be alone with my mother as a newlywed. And, he was only 17 years older than my brother and me, making him an unusually young father to a pair of seven-year-olds.

Funny how we repeat parental patterns: I took on my own set of twins when I fell in love with their father. I was 26; the kids were 10. I also missed that childfree newlywed period. Today, 36 years later, I sometimes explain my failures as a stepmother by pointing out that I wasn’t yet mature enough to be a parent, not to kids that old anyway. Whether that’s an insight or an excuse, it allows me to forgive my stepfather for any missteps he made.

I’m lucky to have had my dad in my life long enough for his virtues to crowd out any failings. I now fully appreciate his generosity, both in spirit and in dollars. He paid for my braces and swimming lessons and car insurance. He let me drive his Datsun to my driver’s test, not making a peep when I braked so suddenly, he spilled hot coffee on his legs. He enjoyed talking about ideas: I clearly remember his teaching me what it means to say “all things are relative.” And he was a great source of books, joining mail-order book clubs and hauling home stacks from the library.

But mostly, my dad gave me the world. If he hadn’t fallen in love with my mother, I might have stayed in small-town Tennessee, content with the familiar, maybe a little fearful of new experiences and people different from me. Instead, I learned to adapt; I attended 13 schools, and I always found someone to eat lunch with me. I developed curiosity and went into the perfect career—journalism—to satisfy it. Later, I became a teacher, partly because I loved books, but also to have two months off every year to travel.

In 1990, I returned to Schweinfurt and saw the apartment building, the PX, the school and playground I had so enjoyed as a nine-year-old. I found it easy to read signs and order from menus in German, though I hadn’t spoken the language in almost 30 years. Memories of lilacs and brotchen and Advent calendars came flooding back; I sang a verse of Stille Nacht (Silent Night) and ordered white Spargel (asparagus) drowned in sweet butter. I felt at home a long way from home.

My stepfather died early this morning after years of ill health. He was brave, funny, and generous. I wrote this memorial before he died so he would know what I would remember about him.