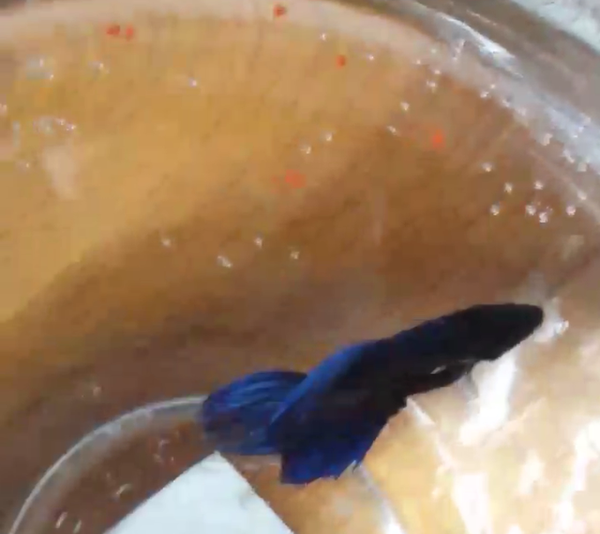 I don't have very many photos of Charlemagne, and that may be my greatest regret. He was just that type of companion, the kind you don't think will ever not be with you. It feels silly to write that about a fish, but Charlemagne was no ordinary fish. He reminded me of the stereotypical aggressive, usually male, character who's kind of scary, but is 'really nice once you get to know them.' You know the type. But this time I was the one saying that Charlemagne was really nice once you got to know him, and he really, really was.

I called him Charlie for short. Charlie and I first met when I was taking a required Zoology class. The class contained dissections upon dissections, which I was first excited about because I had never dissected anything in my life. My excitement did not last long. Towards the end of the semester, the class was told to perform a harmless experiment on a set of beta fish. The experiments weren't terribly interesting, but we did get to play (is that not the scientific term?) with three beautiful, rambunctious beta fishes. I naturally took it upon myself to name the fish. One, as you have likely gathered, was Charlemagne. The others were Richard III and Otto van Bismarck. The rest is history - I picked up Charlie when the Zoology class had ended, and we were on our way.

I, in my excitement, did not realize that the summer was fast approaching, and that I could not take Charlie on a sixteen hour car ride home to New York. The result was that Charlie met more people than most fish ever do. He stayed with various friends, and enjoyed every second of his first and last Wisconsin Summer. We were back in action by the Fall. Truthfully I don't have specific memories or adventures of that Fall with Charlie to recount. I just remember him being a calming and loving presence in my life, and for that, I will always be grateful. In this time frame he also received a home upgrade, because a plastic fishbowl didn't vibe with his style. He deserved better than that. Then came the Winter. Once again, Charlie could not come home with me to New York. But this time, he ventured further to the west, and ended up being hosted in Colorado for my month long break. The Spring passed as Springs do, with alarmingly fast moments of warmth followed by much slower bouts of cold. And he was there for the ride, for each paper written and chapter outlined.

Charlie was all set up to stay in Wisconsin for his second summer when he died. I was cleaning out his tank in anticipation for his new summer home when he flopped out of the tank and into the sink. I screamed, and frantically tried to pick him up and put him back in the water, but it was no use. He was lying flat on his side and made no movement. For a while I watched him, hoping he would suddenly wake up. But he didn't. I made Charlemagne a makeshift casket, and sent him off on the waves of the Rock River.

I recall crafting his casket, and singing a song I had made up for him earlier that year.

Lizard's got a plan for you.

You're so cute! And you're funny too!

You were once, the emperor,

of the Holy Roman Empire.

as my little fishy Charlemagne.

Charlie is very dearly missed. He's surely onto his next adventure by now, but I hope he enjoyed his short stint being a true giant among fish in Wisconsin. I certainly did.