My beloved husband Gene Glickman died in the early morning hours of December 5, 2020. Among the family members mourning Gene’s passing are his four daughters—Ann Glickman, Miriam Maher, Adina Glickman and Halimeda Glickman-Hoch--his sister and brother Joan Corn and Dan Glickman, and his six grandchildren—Sophie and Tim Greller, Dylan and Grace Maher, and Nick and Max Fletcher.

Gene was born and raised in Brooklyn. He attended the High School of Music & Art, founded by Mayor Fiorello LaGuardia in 1936. There he discovered a community of kindred spirits and the affirmation to pursue a life in the arts. Upon graduation in 1952, he received first prize “for excellence in theory and composition.” The award—an orchestral score of Bach’s Mass in B Minor—was presented to him by Mrs. LaGuardia.

Sometime during his Queens College years, Gene began to write for the folk song magazine Sing Out! Since it was then the height of anti-communism, Pete Seeger, a co-founder of the magazine, protected Gene by giving him the pen name Ernest Gruber.

A few months into his first teaching job—fifth grade at PS 1 in Lower Manhattan—Gene turned 21. When he was called down to register for military service, he refused to sign the loyalty oath. The pro bono lawyer who defended him—Leonard Boudin—tried to devise a case in which Gene would be too subversive for the army but not subversive enough to lose his teaching license. In the end, Gene stayed out of the army, but he lost his teaching license.

It was at that point that Gene decided to become a college teacher. He went back to school and received his doctorate in musical composition from Indiana University, where he minored in folk music.

Gene taught at Nassau Community College (NCC) from 1963 to 1999 where he helped to found the teachers’ union and served as its first president. He was a terrific teacher and served as a mentor to faculty as well as to students. He was also, at times, the bane of the administration’s existence for publishing, when he believed it was needed, a satirical parody of the college’s newsletter. Without him knowing it, the college library collected the many issues of Gene’s gadfly newsletter which they presented to him in a bound volume upon his retirement. Another copy still resides in NCC’s library.

During the academic year 1969-70, he spent a sabbatical year in Sarajevo, Yugoslavia, teaching at its Music Academy. He returned to Sarajevo for visits several times thereafter including for three weeks in 1997, after Yugoslavia had split into fragments and Sarajevo had undergone a prolonged siege conducted by Bosnian Serbs.

His many musical accomplishments include more than 200 choral arrangements of songs of struggle and freedom collected from around the world.

He delighted in directing a progressive chorus called “Harmonic Insurgence” until just a couple of years ago, making choral arrangements for it and other choruses. The other choruses Gene conducted over the years and made arrangements for include The New York City Street Singers, which Pete Seeger started and in which Pete sang bass, and the University of California, Riverside (UCR) Chamber Singers, which you'll see performing in the video above. You can see Gene sitting in the audience, listening with pleasure, right side, second row.

Long Island University students researching Brooklyn activists involved in the Civil Rights, and subsequent antiracist movements, conducted an interview of Gene that will eventually be added to the Brooklyn Historical Society’s archives. The interview, in two parts, is also included in Deborah Mutnick’s comment below, so you can click on that to hear his voice and some of his stories first hand.

In 1984 with his first wife Toby Glickman, Gene developed and published a guide to walking tours of Manhattan below 14th street that visited scores of locations, parks, streets, and buildings that had played a part in progressive and radical movement history from the American Revolution through the anti-Vietnam war movement.

Here's a listing of Gene’s recent articles for CounterPunch.

Dear Nancy -- sending love and condolences to you, and all of your and Gene's beloveds.

I am a remarkably self-centered person, and when I lose the possibility of having further intercourse with someone I love as I love Gene, I'm just angry. FURIOUS at what-you-will; G_d, Fate, Reality, Nature -- all the same in my book. I want to live inside my lovies, just be with them always and there's always this 'future' time/event/production where we will work together again.
Gene was so, so..whole. He was such a whole human being. He really lived 'a power of example' -- that wasn't his intention, but it was the fact of him. What a blessing to have known him! To have worked with him! To appreciate him! And to have been appreciated by him?! Too much! I bask then in the glory of Gene - I sing the Kaddish! And this poem by Carrie Fountain "Want"... Love you so much Genie Gene. Love you so, so much.

Gene was cremated at Green-wood cemetery on Thursday, Dec. 10th. Beforehand family members and a few friends (we had to limit the gathering to 9 people due to Covid precautions) gathered under a weeping beech tree to honor him and say goodbye. It was a beautiful place, the weather was cold but the sky was blue with little white clouds and there was, at times, sun on his face. We had dressed him in his preferred-in-life outfit: jeans and a t-shirt. The t-shirt had the name of one of his early choruses on it: Four Parts of the Movement Chorus. We placed copies of his music, letters to him, pictures, a special stone, and the last chocolate bar he had been eating before he got sick (he so loved chocolate!) into the casket. We told stories, talked about our relationship to him and his effect on our lives and how we hoped our relationship to him would continue to grow as the days and years spin out. I sang and read a bit of the words from Bernice Reagon's song "They are Falling" which Gene loved and once told me he would like sung at any memorial for him.

The picture, taken by our neighbor Amy Cunningham, who served as funeral director, is of us closing his casket at the end of the ceremony. 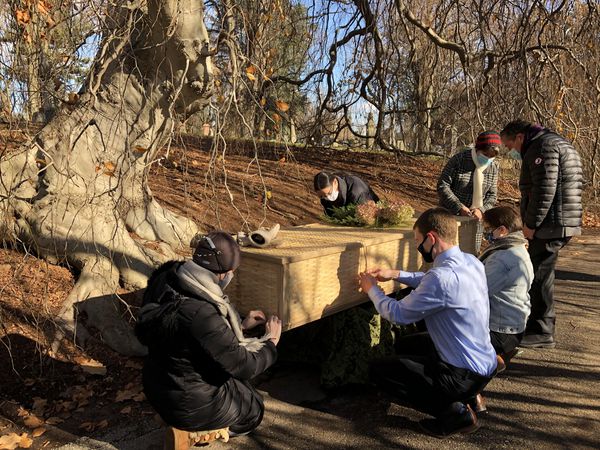 I was honored to have been invited as one of the 9, to play Bach Sarabandes from the Suites under that beautiful tree, in Gene's honor. Thank You Nancy and family! Martha Siegel

Thank you Martha for playing your cello. The music was beautiful and Gene would have loved that you were there. Much love, Nancy

On December 10th on the radio/tv program DemocracyNow! Gene's arrangement of Birmingham Sunday was played with an announcement afterwards of his death. It's at the 22:42 time mark.
Here's the link to the show:

It feels strange to call my thoughts of Gene "memories"; he is still a very lively, neighborly presence in my mind--the friend who lives down the block on Maple Street, who (like me) isn't necessarily long on social niceties, but who wows me with his generosity when it comes to community involvement, exchange of political ideas, and eagerness to share not only his love of music but his craft and expertise as a teacher, chorus leader, and creative spirit. It means so much to me, as someone who also tries to combine art and activism, that Gene kept going over the long haul, constantly reinventing ways to make music in community and to make community through music--showing by his actions his belief in power, and art, to the people. Along with Winston, my future husband, I first got acquainted with Gene in 1987, when he came to teach the anthem of revolutionary Nicaragua (the "Sandinista hymn") to our small group of activists who were about to travel to that country. (We were part of a delegation from the Brooklyn-Nicaragua Sister City Project, a people-to-people solidarity campaign that fundraised for a clean water system for a tiny community on the Honduran border.) It was after seeing Gene and Nancy's Maple Street house that Winston and I decided to look for a place in Prospect Lefferts Gardens, moving here in 1993. Last year around this time, we had the pleasure of accompanying Gene and Nancy to a holiday concert by the Brooklyn Brandenburgers chamber ensemble. Held in the Old Stone House on Fourth Avenue in Park Slope, it featured, in addition to Bach, Gene's stirring arrangement of several folk melodies and labor songs. It was wonderful to see Gene's joy in the event, as he seemed to "rediscover" both the baroque master and the popular tunes he himself had arranged via this live performance. I've sat in so many community meetings with Gene, some of them quite long and tedious as tends to be the case when people are trying to figure out the mechanics of homemade progressive change. Gene, "unbossed and unbought," knew that freedom often requires taking the long way around. I will never forget his commitment to going the distance.